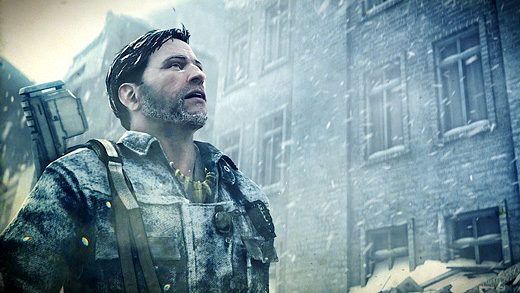 WTF The appearance of the standard automatic rifle so late in the game.

It's been a disappointing year for PlayStation-exclusive sequels, which now number a whopping eight. Despite their vaunted pedigrees, few managed to improve on the well-worn formulae of their forebears. Even inFamous 2 and Uncharted 3 were slight letdowns, particularly in the story department.  Thankfully, what these other sequels lacked in improvement, Insomniac's Resistance 3

brings in spades. Not only is the game a quantum leap over its predecessors, it's a shining star in a saturated genre.

Resistance 3 opens with Joseph Capelli taking over hero duty for a long-deceased Nathan Hale. Dishonorably discharged and wearied by endless fighting with the alien Chimera, Capelli now tries desperately to carve out a life for his wife and child in the ruins of small-town America.

This makes for a refreshing reprieve from the pseudo-militaristic SRPA nonsense of the previous game and allows Insomniac to focus on a more personal story: Capelli once again finds himself on a journey to save the world from alien takeover, but this time it's not for the sake of mankind's future. Instead, it's to postpone mankind's inevitable demise long enough for his wife and son to lead some semblance of a life among an underground colony of survivors. To do so, he must venture to New York with beleaguered scientist Fyodor Malikov in order to shut down an icy intergalactic portal, the details of which are kept predictably sparse.

For those who care about the story in a game like this, I wouldn't dare spoil what happens on Capelli's cross-country journey. Needless to say, there are a few complications. A new type of enemy emerges roughly two-thirds into the game, and its appearance leads to one of the most unexpected and emotionally jarring cinematic sequences I've seen in a video game. It's not often that the non-interactive portion of a video game can compel a player to feel raw emotion, but I found this particular moment to be enraging in the best way possible.

It is in Capelli's harrowing experiences and perseverance that the game finds its soul. While he may not be the most fully fleshed-out or relatable hero around, his personal motivations are compelling. By the time he makes a heartbreaking radio speech on apparently broken equipment, broadcast to no one in particular, the player can't help but root for him to do the impossible—or at least as much damage as he can in the time remaining. 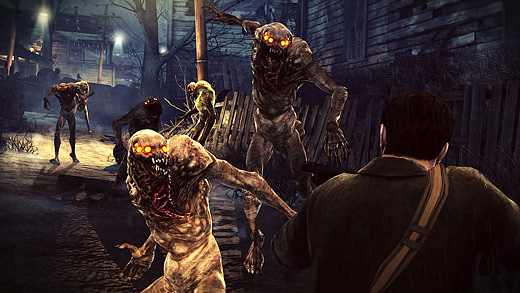 Resistance 3 tells an unusually somber story and it's no small coincidence that the game has drawn comparisons to Cormac McCarthy's The Road. Nevertheless, it is not an altogether depressing experience. The hopelessness of Capelli's suicide mission is palpable, but never bores with a lack of efficacy. On the contrary, the arsenal is as effective and impressive as ever (particularly a new gun that emits a mutating gas), and by surrounding players with a rather dismal context, Insomniac allows them to rejoice in the small victories of breathless escapes and helping a few fellow survivors. The developers also never let players forget what is at stake, with constant reminders of the protagonist's basic, vulnerable humanity. This is an incredibly visceral game, and that's due in large part to an atmosphere that feels fresh despite its save-the-world trappings.

The game's setpieces are similarly deceptive in that they freshen up some tired scenarios. For example, a dash through mine tunnels recalls the "Vortal Coil" section of Half-Life 2: Episode Two, but its placement here in a boss fight is so well conceived that it still manages to thrill. Likewise, the included on-rails train and boat sections are hardly revolutionary, but their visuals and moment-to-moment events evoke so much dread that the player can't help but cringe as giant machines approach menacingly or herds of creatures stampede in the distance. In an age when first-person shooters constantly try to outdo each other until they reach Michael Bay levels of mind-numbing stupor, it is an achievement that Resistance 3 is stuffed with genuinely pulse-pounding entertainment. The pace lets up a bit towards the end, but the final, largely scripted moments still manage to excite.

Though the single-player is outstanding, the multiplayer is pretty much standard fare—players can go through the campaign with a friend or play one of five familiar modes in 16-player competition.

The competitive multiplayer suffered from lag when the game was first released in September, but stutter and balancing issues have been remedied by a steady stream of updates (the latest of which has provided two free maps). A few of the competitive maps are a bit crowded for my tastes and can lead to momentary spawn camping when a team is outmatched. Dynamic spawn locations would seem to help with this issue, but at times this system mysteriously spawns the player among a throng of enemies.

Multiplayer leveling takes a shorter time than in comparable shooters, which is a good or bad thing depending on how much one values instant gratification over long-term replayability. For what it's worth, leveling perks are thoughtfully distributed and possible combinations are varied enough that newer players are not put at a tremendous disadvantage. Overall, the multiplayer may not steal time away from Call of Duty and Battlefield, but it's a solid, fun offering in its own right.

I will admit that while Resistance 3 may be an improved game, it is not an altogether innovative one. Gameplay-wise, there is very little here that hasn't seen before, particularly in the previous two Resistance titles. However, I'm of the opinion that a game doesn't have to reinvent the wheel in order to be extraordinary; it simply has to do as much as it can with the genre conventions it is given. Resistance 3

does plenty. It's beautiful, thrilling, and—quite unexpectedly—contains one of the most memorable campaigns this side of Halo and Half-Life. In a year full of Sony-branded disappointments, Insomniac has produced an absolute gem. Rating: 9.0 out of 10.

Parents: According to the ESRB, this game contains blood, gore, intense violence, and strong language. There are moments between human characters that are extremely vulgar and disturbing—more so than in previous Resistance titles. Keep kids out of this one.

Deaf & Hard of Hearing: When enabled, subtitles cover in-game and cut-scene dialogue. There is also an on-screen directional indicator to show where attacks are coming from.

I found the move integration in R3 to be fantastic – its really the best motion controlled FPS since metroid 3. It’s also a much better game then U3, in my opinion, so i’d recommend the R3/move bundle. plus the money you save on the cheaper bundle and free move camera/wand can go towards a purchase of U3 (which is still a pretty good game, just nowhere near as cool as U2).

[quote=Matthew Kaplan]It’s difficult to speculate about multiplayer communities, particularly since I tend to move on to single player games after fiddling around with mp for awhile. Personally, I’ve spent more time with R3’s multiplayer, but that’s only incidental (it came out earlier and during a month when there were fewer big 2011 releases). From what I can tell, my best guess is that Uncharted 3’s multiplayer will have the greater longevity, if only because it’s exponentially more popular than Resistance and has outsold R3 roughly 4:1 so far. Both games offer very different unlocks and forms of customization; R3 focuses… Read more »

Really intriguing review; I’m definitely going to pick this up in the new year now.

It’s difficult to speculate about multiplayer communities, particularly since I tend to move on to single player games after fiddling around with mp for awhile. Personally, I’ve spent more time with R3’s multiplayer, but that’s only incidental (it came out earlier and during a month when there were fewer big 2011 releases). From what I can tell, my best guess is that Uncharted 3’s multiplayer will have the greater longevity, if only because it’s exponentially more popular than Resistance and has outsold R3 roughly 4:1 so far. Both games offer very different unlocks and forms of customization; R3 focuses primarily… Read more »

As some one who after receiving the last xbl dashboard update and due to microsofts continued lack of focus on the demographic who made the console such a success, has decided o swicth allegiances and pick up a PS3 over xmas –

TTell me – Between this and Uncharted 3 – which of the two would have more longevity in its MP?

Both in a sense of

A) How long will the community last?
and
B) Which of the 2 offers more customization and unlock progression?