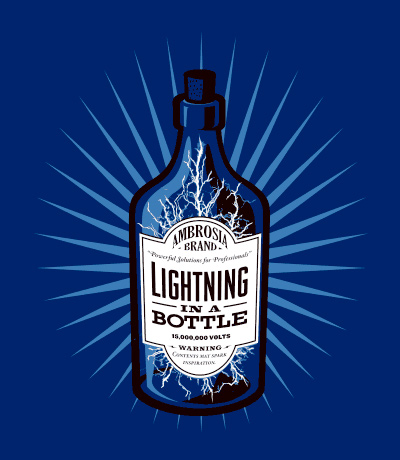 Imagine selling lightning in a bottle. It's a curious and somewhat paradoxical image, isn't it? Our heads can't quite wrap around the idea of packaging the intangible… of owning a fleeting moment in time that leaves behind nothing when it is gone. That's because lightning isn't an object. It's an idea. It's the way our eyes and minds make sense of natural phenomena, ionic polarization and discharge in the atmosphere. These phenomena exist in physical space, in our reality, but the visual impact of their interaction—the brilliant ghost image left in our heads, the multi-veined concept we call "lightning"—doesn't exist as we perceive it. Yet it exists for us.

In the information age, we all know that we can buy experiences, even the intangible kind. In gaming, gold-farming, auctions for imaginary game items, and fully downloadable game libraries have become commonplace. This is because experiences and ideas, fleeting as they are, have true value to us. They build our character, produce enjoyable effects in our brains, and sometimes allow us to relate to each other.

So that's buying and selling. But somewhere in between creation, sale, and experience, that fleeting moment of "content" becomes something other than tangible property. Something far more nebulous. Lightning in a bottle.

Anyone familiar with digital rights management, copyright, and the music industry over the past fifteen years will acknowledge that this is murky territory. We simply don't own what we pay for anymore. Experiences are more commonly leased to us, even if we never return them. And when we're done with them, we're done. They just… disappear.

This is certainly a precarious caveat where gaming is concerned. While game prices have remained rather low compared to the rate of inflation, no one would argue that $30-60 for a game is a paltry sum. And despite the seeming inconvenience of buying a physical copy of a game in the age of "I want it now" and "I want to carry it all around with me," there is always the satisfaction of knowing that physical copies of games can be owned. When the player is done with the game, there is the option of resale, loaning to a friend, passing down to a sibling, transfering to a newer computer or backwards compatible console further down the line, and so on.

This may not be the case for digital downloads, but we humans are a crafty lot. We try to find ways to make that which is fleeting and impermenant into something more tangible.

Joystiq recently reported with some surprise that an Ebay user was putting his entire Steam account, including a whopping 139 games, up for auction:

We [the editorial staff at Joystiq] think this is interesting for two reasons:

Me, I'm less surprised. I'm not sure about the legal ramifactions, but in theory this is very similar to someone selling their World of Warcraft account.

I'm also not surprised someone has finally tried to skirt Steam's policy of no resale and no returns. It's an aggravating feeling to not own something you've purchased.

And surprisingly few gaming and electronics companies have keyed into this consumer frustration. Sony, whose expensive PSP Go allows for nothing BUT digital content, offers no refund policy and obviously no method of resale (once the PSN account has been disassociated with the machine, that is). Ditto for Nintendo, Microsoft, Apple, etc.

The refund part is even more frustrating. It's one thing to not own a game, but to not be able to return it if it is faulty or not as promised? In theory, someone could plausibly dispute a credit card charge for a download… but in practice, purchases are often made with virtual currency such as Microsoft "points." Even filling your "wallet" on PSN is considered a separate purchase from buying the individual game. Sneaky.

Amazon is charting new territory here. As reported by Kotaku, Amazon has initiated a policy for its Kindle reader that allows the user to "return" digital content (I'm assuming that means removing access from the user's account) within seven days of purchase.

But that says nothing for resale. If we want to truly elevate digital content to the level of property—or at least a reasonable facsimile thereof—we must encourage content providers to initiate policies that allow for life after sale. Of course, providers have little to gain for allowing users to resell content: As with brick and mortar retail stores like Gamestop, transfer of ownership cuts into a company's possible market for new sales.

So here are a few ideas of how to incentivize resale and returns for buyers and vendors alike:

1. Charge upfront fees—say, an extra $3-5—to allow a customer to resell their access rights to games sometime after purchase. Once the game is sold, it will be deactivated from the account. Or package this in with a service's subscription rate… for example, an extra $30 on top of the annual Xbox Live Gold Membership for the ability to resell Live games. The obvious downside here is that DRM would be required for all digital content. And if not DRM, some kind of mandatory uninstall "patch" to be downloaded upon resale.

2. Allow the vendor to take away a percentage of the resale value (since it is digital content, this would most likely be full market price), ala EBay. Possible downside: Since no such system is currently in place (i.e., no competition), that percentage could be quite high.

3. Allow users to "rent" out their purchases to friends for limited periods of time, with renters "gifting" points or virtual currency for each rental. The incentive for vendors here is that full ownership is never transferred, actual money is never exchanged, and it is a kind of extended demo of certain games… possibly allowing for higher sales in the long run. Downside: This still isn't resale.

4. Turn the vendor's entire digital distribution system into a rental system. It seems Sony may be experimenting with something like this for PSP games, allowing users to "rent" games at low prices with definitive expiration dates… but nothing is set in stone yet. The other alternative is something like Gametap… an "all you can eat" membership whose games expire only when the user stops paying. Downside: Again, this isn't true ownership, and it might even be considered a step backwards.

What do you think? Any other ideas?

CP owners have 2 ways to go in these times. What I call “attrition” sell it as low as you can without any protection and no returns, this would allow for a open and fast flowing market were one dose not have to nit pick to much at anything because things either get sold or they do not and do to the limited attention span of the public there will be alot of re buys. The other option is to have “war” with the consumer you can this in the game industry where games have so much nanny software on… Read more »

[quote=Matthew K]And consumers have largely responded by not buying the PSP Go.[/quote] Indeed. The thing that worries me most about the apparently abundant short-sightedness of the industry’s big players ist that greedy and consumer-unfriendly behaviour might end up hurting the whole video game market. Maybe not financially, since I don’t think general spending on video games in going to drop anytime soon, but in focusing more and more on blockbusters, with incentives to just buy a few (high-priced) games and thereby narrowing our gaming horizon. Or in other words: if I can pick up a used game for a few… Read more »

[quote=Jean Paul]I say institute two prices: a low one for the “locked” copy and a high one for the copy that you can resell (like Matthews first proposal). That way the market gets to decide.[/quote] I think the market is already deciding where something like the PSP Go is concerned. As much as I enjoy my Go, I can fully appreciate everyone’s biggest problem with the system. A PSN copy of a game is generally far more expensive than a UMD copy… which, as you note in your comment, is sort of an ass-backwards way of doing business. You can… Read more »

As a consumer I miss being able to buy and sell used, cheap games, but let’s face it: publishers have strong incentives to limit second-hand dealing. I say “limit”, not “eradicate”, because I strongly believe that trading of used games has its benefits for the industry (e.g. a cheap copy of a game might interest you in its successors). The precise extent of this “limit” is dependent on how much the benefits of a high-level penetration through used games’ sales compensate for the loss of revenues for the publishers. Since it’s practically impossible to measure these parameters, it comes down… Read more »

I already posted this on my twitter, but would it be possible to bind downloaded content to the storage device, rather than to a specific console or account? People could throw their memory sticks and hard drives up on ebay with a list of games included or something like that. This would introduce problems like what if someone didn’t want to sell ALL the games on a storage device, which I don’t have an answer for, but I also can’t imagine any content provider being excited about setting up and running infrastructure that (from their perspective) cuts into their bottom… Read more »