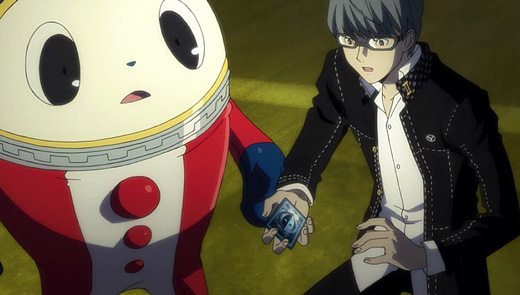 HIGH The Mystery Gang mocking their own corny "Persona!" cries while plastered.

One of the toughest lessons for a reviewer to learn is that there's no such thing as an objective review. Biases infiltrate every single moment we spend with a game, at times rendering it impossible to put ourselves in the shoes of another player—perhaps someone who cherishes the very things we can't stand. The challenge then becomes turning a completely subjective experience into something befitting a broad readership.

In my case, I went into reviewing Persona 4: Golden

completely burnt out on Japanese role-playing games (JRPGs). I've had enough grinding and turn-based combat to fill two lifetimes, and this is especially problematic when it comes to Persona 4 because it wears its JRPG bona fides on its sleeve. I never bothered to get past the fifth hour of the PlayStation 2 (PS2) version when I played it years ago, and I still find it difficult to endure the genre qualities that scared me off then.

I mention this not to preface a scathing diatribe, but rather to explain why the following review is not going to be quite as glowing as it would be if someone more JRPG-friendly were reviewing it. Persona 4 has no shortage of fans, and many of those fans are precisely the kind of fervid people who are going to read reviews like this only to ensure that minimum standards of stunningly reverent hyperbole are upheld. They will buy the game regardless of what I write, and to be fair, they absolutely should. Persona 4: Golden is nothing if not sterling fan service. The more pressing question is whether the game is right for people who haven't already made up their mind about it one way or the other.

For those unfamiliar with the property, Persona 4: Golden is the expanded re-release of the 2008 entry in Atlus' long-running Persona series. Each installment is self-contained, though they are all set in a world where a select few high school kids are able to summon Pokem—err, "shadows" of themselves. These shadows, called Personas (grammar notwithstanding), are imbued with the sorts of elemental powers one would expect of a JRPG, and they largely function in combat as a sub-menu for magic selection. Combat is standard turn-based fare, bolstered only by a predictable weakness-exploitation system and an addictive Persona collection and creation process. 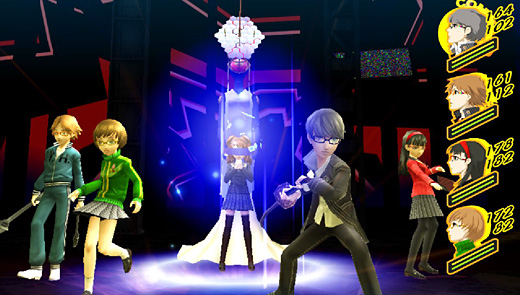 As with Persona 3, Personas are enhanced by ancillary story elements called "social links." On most days within Persona 4's timeline, a handful of social links are made available to the player via optional scenes spent bonding with characters encountered at various locations in the game world.

While the ensuing social link sequences are largely forgettable in terms of both scripted content and a low level of interaction, players will find themselves eager to engage in new social links so as to flesh out character backstories and garner bonuses for created Personas. Thankfully, time management is rather streamlined, allowing for one set of events during the afternoon and another at night. Though it grows repetitive long before the game ends, the social-sim aspect of Persona 4 is a welcome respite from dungeons and grinding, and is made more accessible by the Vita version's expanded nighttime social linking.

The bigger draw here is the main storyline, and Persona 4's lengthy, eventful tale is easily its best quality. It is at once a coming-of-age story, a high school comedy, and a supernatural murder mystery… and for the most part these disparate elements come together splendidly.

Granted, a few tedious anime tropes surface, including uncomfortable sexual innuendo, a mysterious character with amnesia, and an all-too-adorable child with a distant parent. Also, the supernatural high school drama is arguably well-worn territory, treading in the footsteps of decades-old Japanese hallmarks like Ranma 1/2, Urusei Yatsura, Kimagure Orange Road, and Here is Greenwood, let alone the previous Persona games. Still, I found it to be a surprising, rewarding, and a times downright touching journey—anime clichés be damned. That the game borders on treacle and raunch without ever venturing wildly in either direction is a testament to its careful pacing and subtly humorous writing, not to mention a superb localization for English-speaking audiences. 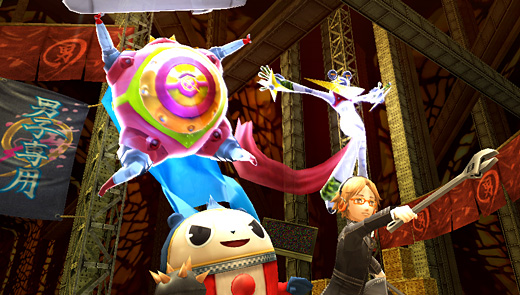 Having never made it through the original, I cannot adequately compare the two versions, but there does seem to be enough new story content to warrant a second look from ardent Persona 4 fans, if not a whole lot of new playable/combat content. Just don't expect much from the newly-added Marie, however: I found her social link storyline to be embarrassingly shallow, and her presence in the Velvet Room—sporadically marked by bizarre "poetry" sequences—comes off as superfluous.

One change that will be welcomed by fans and neophytes alike is the ability to select which powers are inherited when fusing together Personas. This addition, along with the ability to continue from individual floors in dungeons, serve to make the Vita iteration more approachable and less time-consuming than the original.

Another promising new feature is a Demon's Souls-esque dungeon rescue system that sends an SOS via the PlayStation Network, but I never managed to secure a response to my calls for help. It was not clear whether the system failed to work properly or too few people were online at the time I used it; either way, it could stand to be better explained.

My own biases aside, there are aspects of Persona 4 that should be called into question by any reasonable JRPG fan. For one, the semi-randomized dungeon environments are still a massive bore both in terms of visuals and gameplay; they feel like antiquated relics stripped from the banal first-person mazes of the original Persona.

Also, for a game built around player choice, far too much of the game involves scripted events that wrestle time-management and control away from the player, replacing them with an hour-long marathon of pressing the X button to advance dialogue. With regard to the Vita port, the PS2-based graphics, though colorful, look slightly blurry and washed out compared to the crisp high-definition menus.

As much as I found myself groaning through the parts I knew I would dislike—namely, the grinding and overwhelming sense of repetition that emanates from combat and time management—I grew to respect Persona 4: Golden

. I can't say I completely enjoyed my time with the game, but I'm not the kind of person who would be interested in buying it. Those who are will find an admirably polished JRPG and a welcome addition to their burgeoning Vita library. Rating: 8.0 out of 10.


Disclosures: This game was obtained via publisher. Approximately 60 hours of play were devoted to the single-player mode, and the game was played through once (two endings viewed) on Normal difficulty. There are no multiplayer modes.

Parents: According to the ESRB, this game contains a reference to alcohol, animated blood, language, partial nudity, sexual themes, and violence. Though not meant for children, the game in no way deserves the stern rating heaped upon it by the ESRB, and the aforementioned, ESRB-determined content is so slight as to hardly warrant mention. Despite a few deaths and some mild curse words, Persona 4's material is on par with a teen-centric TV show on the ABC Family network.

Deaf & Hard of Hearing Gamers: Most dialogue is accompanied by text, but unfortunately the few brief animated cinematics lack an option for subtitles. Audio cues are not necessary for gameplay, but these few omitted instances are disappointing.