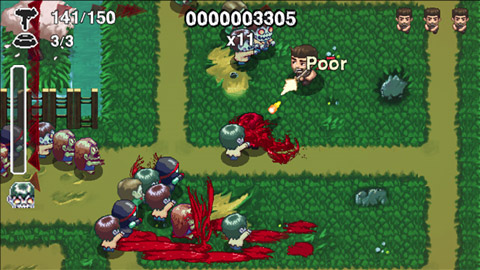 By and large, the consensus regarding Sony's slowly expanding line of "Minis" software for the PlayStation Portable is that the games—mostly ports from the iPhone and other platforms—are sorely lacking in quality. Given the initial launch titles, it's not hard to see why: An overpriced Tetris port, mediocre fair like Brainpipe and Vempire, and downright terrible shovelware like Gameloft's Hero of Sparta were among the heavy hitters back in early October. The only bright spot was tower defense mainstay Fieldrunners, arguably outmatched by the relatively inexpensive Pixeljunk Monsters Deluxe.

Thankfully, that's starting to change, and we primarily have developer Halfbrick to thank. Rather than port mediocre iPhone software, Halfbrick has approached ports and new Minis properties with a different perspective, bringing over only the software that truly fits with Sony's purported "quick play" philosophy. The problem with using iPhone software, aside from the fact that most of what's on the overly saturated App Store is garbage, is that the mechanics on a system with no buttons won't exactly impress players who are used to more evolved games on the PlayStation Portable (PSP).

Halfbrick, which is now better known for its Minis releases than for its original Xbox Live Indies titles, has thus far given us four very good-to-stellar titles: Age of Zombies, Blast Off, Echoes and Rocket Racing. Only Age of Zombies, an enjoyable top-down shooter in the vein of Robotron and Dracula: Undead Awakening (also available as a Mini), is exclusive to the platform. Yet all four of these games work extremely well given Sony's projected ethos. Each one is designed around a simple concept or play mechanic and features an interface that makes the game easy to get into, out of, and keep playing. My personal favorite is Rocket Racing (also on Xbox), an addictive cross between Wipeout, TrackMania, and old school slot car video games.

Perhaps the most impressive and fitting Mini to date came out this week (at least in the US). Pompom, better known as the creators of Mutant Storm on Xbox Live and Astro Tripper on PlayStation 3 (PS3), has delivered a real gem in Alien Zombie Death at a mere $3.99. Don't let the crazy name fool you; the game is sheer retro joy, conjuring fond memories of games like Elevator Action, Mario Clash, and even Capcom's SonSon. Each distinct level has players shooting unending hordes of aliens while avoiding environmental obstacles, all in the pursuit of high scores and in-game trophies.

The timing couldn't be better. Having now reached its fifth birthday, Sony's aging PSP hardware is facing something of an identity crisis. The iPhone, which isn't even a real gaming platform, has outpaced the PSP in terms of game revenue. High-profile releases for the year are slim, with only Metal Gear Solid: Peace Walker considered an awards contender. Sony, which opts to advertise upcoming multiplatform games over valuable exclusives like Persona 3: Portable, still doesn't know how to market the damn system. So at least the Minis part of the equation is starting to turn around. Unfortunately, it will take more than just a handful of great casual games to mitigate the damage done by last year's launch titles.

If I were Sony, I'd sign up Halfbrick and Pompom to make Minis full-time, and I'd do it ASAP.