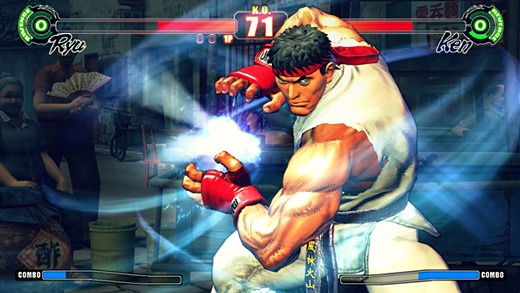 I should note that by "underrated," I mean under-appreciated or overlooked by the media and public. These are games I feel deserve just a spot more attention than they initially received, or sold very poorly relative to their quality. Similarly, my selections for "overrated" games are not necessarily massive hits or top-tier critical choices, but I do feel each one undeservedly dominated a specific part of the gaming conversation at some point or another this year. They're not bad games; just not as good as they could have been. 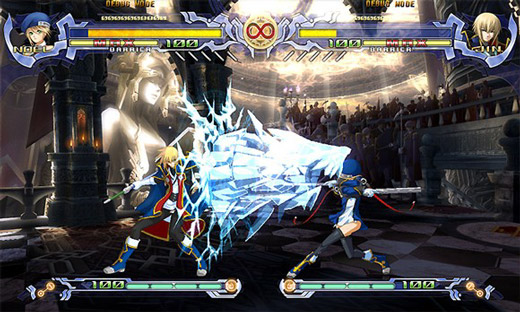 Blazblue is a fundamentally solid fighting game with good online multiplayer, but very little distinguishes it from the countless Guilty Gear titles that preceded it. The story, told sporadically (almost Ran-style) in static bits that look more like Clip Art than part of a polished, $60 release, is a mess (not that anyone plays fighting games for the story). The graphics, while extremely crisp, are not quite as fluid as one would like, lacking the frames of animation of a Capcom game nearly a decade older. Characters are forgettable and the stentorian music is just plain annoying. In all fairness, had the game been priced lower or not received such unusually high review scores (Gamerankings.com currently has the PS3 version at 88%, making it one of the top-rated games of the year), it probably would not be on this list. That said, Blazblue is coming to the PSP next year in what will undoubtedly be a lower-priced package, and a portable system's more casual, pick-up-and-play setup may serve a better fit. 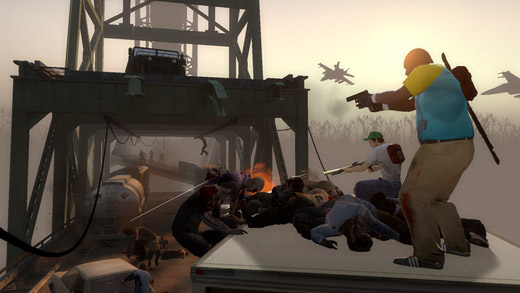 If I could give one game I played this year the "Please Give Me My Money Back" Award, it would be Valve's extraordinarily overrated Left 4 Dead 2. Now, I was not a huge fan of the first game, which I felt was similarly overrated, but I enjoyed it all the same. My main quibble with the title was that its multiplayer focus was not backed up with much in the way of diverse maps or play-throughs of the levels, and as fun as splattering zombies with three other humans was, one could only hold off the rooftop so many times before it became old. Only a year later and Part 2 has arrived to largely glowing reviews. Either the gaming media has conspired against its readership or I have missed the point: This game is barely different from last year's edition. Sure, some of the zombies look different and there are one or two new ones… but the level design is similarly uninspired and the gameplay receives little boost from new powerups and foes. Even the new array of melee weapons is puzzling: How does a samurai sword feel weak compared to a cricket bat (and why are these things littered all over post-apocalyptic New Orleans)? There was a great deal of fuss made over this game's possible status as a quasi-expansion pack vs. full game; I'm sadly and squarely placing myself in the camp of "Why does this cost $50-60?" 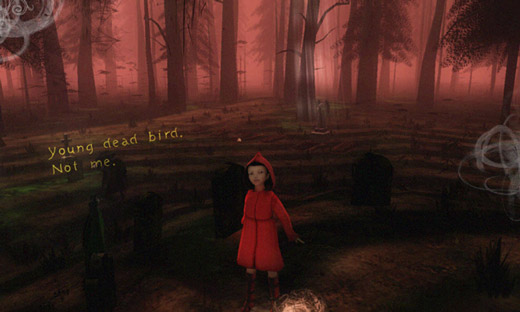 It's difficult to call indie titles "overrated" when so many of them go unnoticed, but The Path had the rare fortune of gaining moderate media attention and thereafter received a very positive reception from press and public alike (admittedly more from the latter than the former). Personally, I feel rather torn about the title: As an extended "demo-scene" or interactive piece of art, The Path is a compelling thought experiment. Its creepy atmosphere and deft exploration of feminine self-discovery and loss of innocence is quite memorable and brainy stuff compared to your average adventure title. On the other hand, as a game, The Path fails and fails miserably. The controls are poor, the graphics are jagged and glitchy, the map is useless (perhaps symbolically?), and the pace is kept unnecessarily plodding. I think developer Tale of Tales would similarly admit that The Path is more demo-scene than game, as most of the company's comments with regard to the title involve its complex and roundabout storytelling mechanism, not its gameplay or interface. Unfortunately, The Path is marketed as a game and priced as a game, and its reception by the media has been that of a spotlit horror game in the vein of Silent Hill. For those reasons, I consider The Path to be one of the most overrated games released this year. 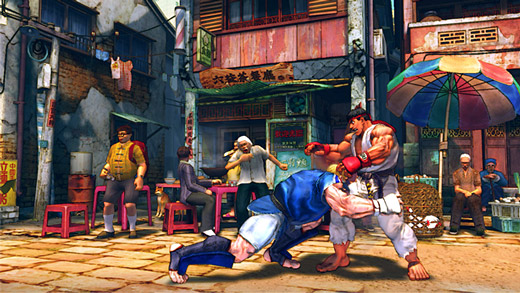 The way I see it, there are two critical factors working against Street Fighter IV and its unearned critical reception: 1. Its regression from the grossly underrated Street Fighter III, and 2. The fact that an improved and expanded "Super" Street Fighter IV game is coming out next year to steal your money yet again. (How very early '90s of you, Capcom.) At its core, Street Fighter IV is essentially a very polished 3D version of Street Fighter II with a few new faces thrown in. These new characters are interesting and play well, but they arrive with an unwelcome guest: The new boss, Seth, is unimaginative and cheap. The gameplay is a massive step backward from the more complex Street Fighter III and Alpha setups, featuring only one super move per character. As for the roster, largely a holdover from previous Street Fighter titles: I know Capcom has stated that they received considerable backlash for introducing too many new faces in Street Fighter III, but did they have to make part IV reek of sameness? Capcom takes very few chances with this game; it's a streamlined version of a title all fighting fans know and love, but one that does not warrant critical acclaim nor widespread commercial success. I can hear the rebuttals now: "It's Street Fighter with a few upgrades; that's the point!" The problem is, if I wanted to play Street Fighter II, I could play Street Fighter II. Doing so would be a far less costly endeavor. 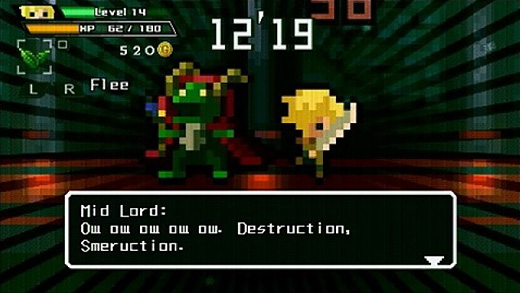 Half-Minute Hero is the kind of quirky XSEED import that is so hard to define and market, it's not difficult to see why gamers would not be chomping at the bit to play it. A Japanese RPG farce that is as hilarious as it is unusual, Half-Minute Hero has players taking part in extremely brief exercises, Warioware-style, in one of four off-kilter storylines. The deliberate 8-bit graphics may cause a headache for some, but I found the game's visual style to be complementary of its throwback gameplay. Half-Minute Hero has received several positive reviews from the gaming press yet generated little in the way of public enthusiasm, never once cracking the PSN Top 20 (or assumably coming close). If you own a PSP and enjoy offbeat Japanese humor (well translated by XSEED), I advise you to plunk down the $20-30 for one of the most enjoyable diamonds in the rough this year. 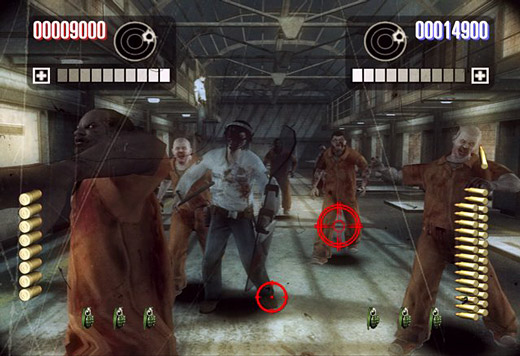 Sega had a rough year on Nintendo's console, with House of the Dead: Overkill and MadWorld both underperforming to say the least. Quite tragic, because I feel they are two of the most overlooked titles this year. For fans of light gun games, Overkill brings a delightfully pulpy '70s grindhouse style to what was once a distinctly Eastern franchise. A hilarious, albeit quite vulgar, storyline provides the backdrop for some terrifically squishy graphics and sound. While the game is prone to minor slowdown, particularly in co-op sessions, I never found it to be gameplay-impairing. At a current price of $13-20, Wii owners can walk away with a steal… and one of the best mature games on the system. 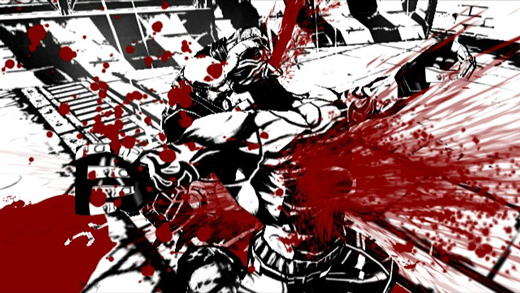 MadWorld is a very unique title for a uniquely motion-based system, although its mature content makes it a rough fit with the slew of Mario and family-themed titles that come down the pipe. Genuinely funny (albeit slightly repetitive) "commentary" by Greg Proops and Futurama's John Di Maggio sets the tone of this often silly take on the Violent Game Show Voyeurism trope (ala The Running Man, Manhunt, and Smash TV). One would not expect to find much depth underlying the game's simple "beat the high score" arcade gameplay, but a surprisingly gritty storyline and numerous secrets bolster what could have easily been 2009's version of The Club. Some of what's there is forgettable (particularly the last two boss fights), but MadWorld certainly did not deserve to sell as poorly as it did. As with Overkill, any interested Wii owner can find Madworld at a budget price of $13-20.

I just wanted to chime in about House of the Dead: Overkill – I fully concur with your comments. Tis a shame the game didn’t sell better. Loved playing through the game and one of the few times (maybe the only!?) where I was grossed out by something (and it wasn’t even shown!). Overkill may be the best entry in the series, as it is definitely better than parts 1, 3, and 4 (though not sure 4 ever graced a console). The only game in the franchise that might be better would be part 2 and the amazing Typing of… Read more »

I had fond memories of SF2, so I picked up 4 when it was lit up with rave reviews. Only to get home and fire it up and be immediately reminded what an unintuitive combo memorizing dinosaur it was. Fun factor completely missing. Though I guess its a chance for the kids to ‘go retro’.

Myself and other posters gave Madworld most overrated titles of the year. I picked it up for $15 off of a clearance rack. After a few minutes of playing my mind wandered. When I realized that I wasn’t even thinking about what I was doing I asked myself “Why am I not playing a better game. Like Street Fighter IV.”