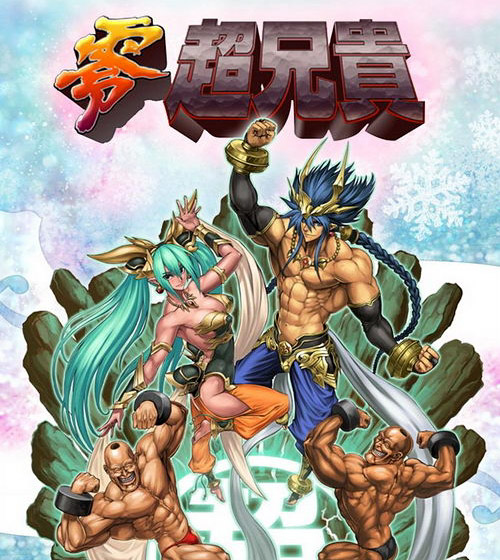 Before today, everything I knew about the infamous Cho Aniki series was gleaned either from a cursory glance at Wikipedia or this Escapist article. It's part of the kuso-ge (literally, "shit game") class of hyper-stylized Japanese gaming, notable only for the use of kitschy humor. Perhaps "kitschy" is being kind in this case. Cho Aniki is to kitsch what Hello Kitty paraphernalia is to cute: overkill to the point of being sickening. These obscure 2D shooters feature every not-so-subtle homoerotic undercurrent imaginable, from characters who shoot semen-like beams from their heads to greased men wrestling and evil phallic monsters. (This, in and of itself, is not what's sickening. I have no problem with references to homosexuality; more so juvenile innuendo this obvious and ostentatious.)

It seems to me that Japanese popular culture has had a love/hate relationship with homosexuality over the last several decades, and that tenuous relationship is on full display here. It's never quite clear whether this is all merely cartoonish pseudo-sexuality run amok and being silly, or whether it's actually so egregious as to take jabs at flamboyant gay subculture. I don't pretend to know what goes through these developers' heads, or to even be able to properly contextualize this fascination with homosexuality in terms of Japanese culture (in which I have never been immersed and have never thoroughly studied). I fully admit ignorance here. All I know is that these games have a bad rep, either for being offensive or simply for being terrible games.

Amazingly, some brilliant (read: "devious") bastard at Aksys Games (who previously brought over the equally incomprehensible Blazblue) decided to bring all of this blatant homoeroticism over to the U.S. in the form of Cho Aniki Zero for the PSP. Upon the game's release earlier this evening, I found myself so tempted to see what the minor fuss was about that I couldn't help but shovel over my $20 to Sony's thirsty coffers.

Here's what I find offensive about the game: It costs $20. No, seriously. At most, this should have been priced in the "PSP Mini" range of five or six bucks. It's terrible. Even by old-school Gradius, "bullet-hell" standards, the game is wretchedly simplistic, not to mention fantastically ugly. So in those terms, yes, the game has lived up to the series' odious reputation. I blame only myself for actually experiencing this overpriced debacle.

In terms of references to homosexuality, however, what I found was relatively tame. Yes, there are lots of half-naked, greased body builders who shoot beams from some part of their body that isn't their crotch. Yes, the continue screen has you press X rapidly until two entangled wrestlers in a still image climax in some kind of off-screen ecstasy. It's just as nutch-nutch, wink-wink silly and juvenile as you might imagine. 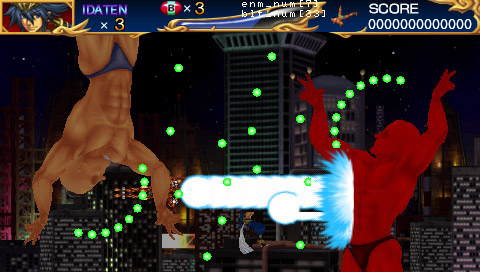 But is it offensive? Granted, I've only played through three of the five total zones so far, but I haven't seen any evidence that would lead me to believe it will offend a gay gamer. What's here is neither titillating nor bawdily inappropriate. It's just goofy and random, with no discernible theme or message to tie any of it together (you're just as likely to be shot at by a giant mech as you are a giant male's leg), almost as if the characters and settings were drawn up by a Japanese eight year-old with crayons and only the slimmest knowledge of what "sex" and "gay people" are.

That said, I'm not gay, and I'm in no position to speak on behalf of any particular audience except myself. And I'm not easily offended to begin with. I consider myself a mature, reasonable person and the mere presence of such humor or the subject matter to which it refers is not going to raise my blood pressure.

Rather, I'm more concerned by the prospect that this game might have been somehow censored or lost its cultural significance (what little exists) in the transition to America. I don't think it did, but that's just a guess. I don't believe Aksys is the kind of publisher that would make wholesale changes to something this offbeat and distinctly Japanese, but weirder things have happened with regard to depictions of homosexuality in Japanese video games (albeit primarily in the early '90s). And as poor as the English translation is (with the exception of the groan-worthy, "Oh God, oh God, it's coming!" loading screen), I doubt that any of these jokes mean something more perverse or cruel in Japanese culture than they do in America. Only someone who has played (and thoroughly understood) both the original and this version would know for sure. If you're that person, please let me know.

It's not like I'm looking to be offended, but I must admit that there is something quite awkward about being an American gamer playing this game. I'm not quite sure what I'm supposed to do with it. Do we really have an analog for the kuso-ge in this country? I'm also not sure what Aksys was thinking when it decided to release this obscure piece of Japanese lunacy in America. Were they trying to please fans of overseas gaming oddities? Cult followers of Cho Aniki? (How many could there possibly be?) Perhaps I'm being overly cynical, but I honestly wonder if this game was put in American gamers' hands so they could point and laugh at the stereotyping as much as the game itself. That's a cringe-worthy thought, and I hope it's not the case.

The game is rated "T" for Teen, so obviously someone at the ESRB thought this was unsuitable for clueless children (who would never understand the innuendo) but just suitable enough for teenagers, who are rarely mature in their treatment of homosexuality. What does your average American teenager do with a game like Cho Aniki Zero? I can only wonder.

Then again, there's definitely nothing "mature" about this game. I'm an adult (most of the time), but I feel dumber for having experienced it.