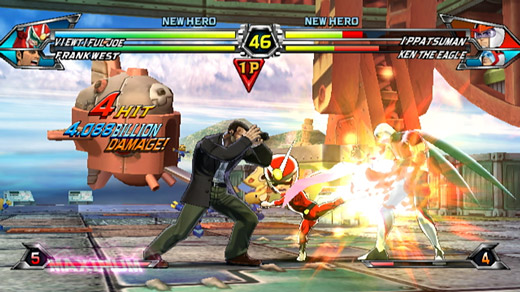 Tatsunoko vs. Capcom is a great game. Too bad it's on the Wii.

I consider myself a big fan of Capcom's Vs. games, a series that pays tribute to 2D fighting fans with fun character offerings and over-the-top moves. They're arguably larger and deeper fighting games than Capcom's mainstay, Street Fighter, and Tatsunoko vs. Capcom is no exception. It's a deceptively simple fighting game whose enjoyable roster possess a wide range of custom-tailored combos and super-moves. Fans of the outstanding Marvel vs. Capcom 2 will feel right at home.

Unfortunately, extended play raises several questions about Capcom's decision to port its arcade game to the Wii back in December of 2008 (and to the US this past month): Why put a major fighting game on a platform whose online system is crippled by nonsensical Friend Codes? Why dumb down the already simplified four-button "Vs." series commands to three buttons, and then force that system onto the Wiimote (or Classic Controller, or Gamecube controller) with confusing results?

Perhaps most disappointing is the question as to why Capcom would cram what is potentially an artistically beautiful game into the confines of the SD-only Wii without also offering gamers a chance to play it in high definition on the Xbox 360 or PS3. It's an obvious step backwards in the graphics department compared to Street Fighter IV; imagine if Capcom had brought Okami to the Nintendo 64 instead of the Playstation 2 and you'll understand my dismay.

Tatsunoko vs. Capcom does many things well, but none of them are related to the Wii. If anything, the fact that the game is on the Wii sours what is otherwise a terrific experience. Reviewers have largely praised the game, calling it a standout fighting game on a system lacking good fighters.

But there's a reason the Wii has few good fighting games: It's not the right console for them. Nintendo certainly didn't design the Wii with fighting games in mind (the Neo Geo it's not), and surely Capcom, the king of fighting games, understood that.

It's also not the kind of family-friendly, general-audience game that sells well on the Wii. It has sold less than 100,000 units in Japan since its 2008 debut and I doubt it will achieve any greater success in the US and Europe. So why on Earth did Capcom take this gamble?

I've been searching online for an answer and have yet to come up with one (other than the vague notion that the arcade version used "Wii-compatible" hardware, whatever that means). If you know the reason, please let me know. It simply seems to me that 3rd party developers have yet to realize just how hard it is to sell a quality hardcore game on the Wii; many are still stuck in bandwagon mode, even if the choice to bring a game to the Wii makes little sense. The Wii is the obvious home to Nintendo properties and a good fit for motion-heavy titles (even if, as I stated my previous blog post, the implementation of such controls is often superficial)… but not much else. Know thy console, developers.

It's a shame that few people will probably play Tatsunoko vs. Capcom. On a more fighter-friendly system, the game could have been stellar.

Super Smash Brothers Brawl sold pretty damn well, I see this game being a good match for those players. Personally I’m glad this is on the Wii, although it is more like “a consolation prize” of sorts, since other consoles got SFIV and SSFIV.

Thank you, Broodwars, for taking the time and energy to write that lengthy response. I appreciate your comments and I think you make some excellent points. In fact, your response gave me pause and made me wonder which I really did mean: “This game shouldn’t have been on the Wii” or “This game shouldn’t have ONLY been on the Wii.” But even after pondering this, I came to the conclusion that it’s a little of both. I should take a moment here to repeat something I’ve said before on my own blog, that for all the problems I have with… Read more »

Reading the article, it seems to me the Subhead would be better written as “Tatsunoko vs. Capcom is a great game. Too bad it’s only on the Wii.” That and some other choice language make it appear that you have a problem with the game even being on the Wii in general, as if the Wii isn’t deserving of such games. For the most part, I don’t understand the complaints of the article. You ask “why put a major fighting game on a platform whose online system is crippled.” Yes, the Friend Code system is a major annoyance on Wii… Read more »

I agree with everything you said here.

When you look at the still shots of the game on the internet or in a magazine the game looks great. At home on a 40+ inch 1080p TV the visuals start to break up.

The zombies in the background of the Dead Rising mall stage looks really pixelated. I am not a huge graphics person, but I hate blurry, jagged graphics in a modern game.