The word "Hollow" applies to more than the title 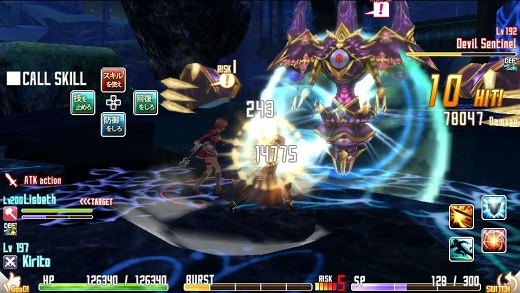 HIGH: Stays true to the anime.

WTF: Why does everyone want to sleep with Kirito?

Anime and video games are often two sides of the same coin. Where there is one, the other is sure to follow. Sword Art Online is just one of many anime features to be converted into a game, which is unsurprising since SAO included plenty of gaming references which contributed to the anime's success. As a fan myself, I thought that Hollow Fragment contained potential to impress—after all, it's a game based on an anime about video games. How could it go wrong?

For starters, the translation in this third-person action title is abysmal at best. I frequently thought I was mis-reading the dialogue, when in fact it was just numerous occurrences of severely broken grammar, jumbled sentences, misplaced or missing words… it's all bad here. Worse, there's no way to switch from Japanese audio to English, so players are forced to read through the sloppy text.

SAO's combat left me feeling sour as well. At first glance it seems to hold up, but the more I put time into it, the more I realized how repetitive it is. As a button-masher with no real depth, I rarely ever had to use any sort of tactics and still breezed through the game, including boss fights. It's not particularly fitting given how intense the anime's action scenes are. Then there's the camera—because there's no way to adjust its angle in combat, I frequently suffered missed hits and couldn't see any of the action occurring offscreen.

Elements of a dating sim also exist within the game. Players can speak to AI allies such as Asuna and Lisbeth in an attempt to raise relationships, but the problem (again) lies in the translation being so horrendous. I just had no idea what the AI characters were trying to communicate. Only two options would ever appear as a response that I could choose, but neither seemed to correlate to the question asked.

As far as multiplayer goes, I couldn't even try it because it's ad hoc (read: local) only. Sadly, I have no nearby Vita friends, and considering that the game (and anime) imitate an MMO, genuine online play seems like it should be a no-brainer.

On the plus side, Hollow Fragment features voice actors from the anime for the in-game characters. While I couldn't understand most of the Japanese, I did recognize the performers. This is definitely a plus for fans of the anime. Maybe the only plus?

I cannot within good conscience recommend Sword Art Online: Hollow Fragment to anyone other than hardcore fans of the series, and even that's stretching it. While the game does a good job of imitating the anime, the horrible translation, stiff camera, repetitive combat and lack of online features seal its fate. This experience? A hollow one. Rating: 3 out of 10


Disclosures: Sword Art Online: Hollow Fragment was obtained via Bandai Namco Games and reviewed on the Vita. Approximately 15 hours and 58 minutes were devoted to the single-player mode, and the game was not completed. No time was spent in multiplayer.

Parents: According to the ESRB, this game contains: blood, partial nudity, sexual themes and violence. I didn't really notice too much blood, if any at all and the partial nudity is kept to a bare minimum. The fantasy violent is nothing to worry about but sexual themes are rampant, even though I think most are unintentional. The translation and wording of some sentence are questionable.

Deaf & Hard of Hearing: Story is told though text dialogue with Japanese voice acting. So even with me turning the sound off completely, I more or less got the gist of the plot. Everything else is of little concern since it's all in Japanese.

So you played 15 hours,i am sure what you played the aincrad levels what are easy,the hollow area is the real game,this game is huge,people playing for 700 hours to get everything speak for himself,the battle system is great,but you need to find the real opponents.killing bosses 30,40 levels above you is the key.ilove the game,but isn’t for casual gamers and is the perfect great japanese games what westerns anime and japanese haters put down without give a good chance.well please don’t review the next sao game ,leave at the more what 40000 vita users in the west enjoy the… Read more »

I would like to say that one, while the combat system does stick to what the anime feels like, it doesn’t change the fact that it’s ridiculously repetitive and a complete drag. If a game can’t hook you within the few couple of hours (ex. 5-20 hours) then what makes you think it’s worth investing 700 hours? I went through portions of both the Hollow area and Aincrad… still unimpressed. This is also coming from a fan of Japanese games, in particular, Disgaea 4 which is extremely grind heavy but entertaining enough to keep my interests. So no, I won’t… Read more »