This fierce is weak 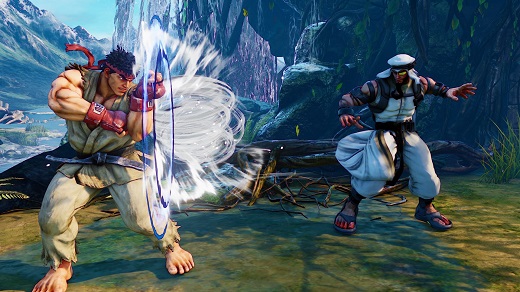 LOW Waiting until June for the complete game.

I first covered Street Fighter V for Gamecritics in a preview last year, and in that piece I said that "SFV feels much like SFIV, so anyone familiar with it will feel right at home".

Now that the game has been released, I'm sad to see that my remark has proven to be untrue, and I'm now forced to eat my words because Street Fighter V has been launched as an incomplete game, and a bit broken to boot. The disappointment I feel towards its current state is magnified because underneath the problems, SFV is actually a fantastic fighter.

Looking at the facts, anyone who purchases the current retail (or digital) edition of Street Fighter V gets 16 unique fighters, an extremely short story mode, online lobbies, a survival mode, and a training mode. In my opinion this isn't enough content to justify the full retail price of $60, except perhaps to hardcore fans.

I'm not sure why the decision makers at Capcom thought it would be a good idea to release SFV with so little content, and I'm surprised to see so many reviews give the game high praise. Maybe things will improve later, but at the time of this review not only was there little content, what content there was had hiccups.

Before getting into the specifics of my complaints, let me address the good things Street Fighter V does, and I'll say outright that SFV is one of the toughest games I've had to review. While I don't like the state it was released in, I can't claim that it's anything other than a great fighter, mechanically.

While the core of the game is what most people with fighting game experience would expect from Capcom's storied franchise, there have been some changes. For instance, Focus Attacks from Street Fighter IV have been replaced by new moves called V-Skills, V-Reversals and V-Triggers.

V-Skills are a range of unique special moves employed by each character. For example, Ken's V-Skill allows him to quickly dash forward and kick, which can be used to catch opponents off guard.

V-Reversals function as a counter for players who are under pressure guarding against attacks.

Finally, the V-Trigger activates a special ability. Looking at Ken again, his version adds fire damage and reduces recovery time between attacks. All three of these additions are great.

I was also impressed with how easy it is for players to pick up a character and be able to stand a fighting chance, so Capcom gets the nod from me for building SFV in a way that makes the fighting system enjoyable for all levels of skill. And in general, my time spent with the game has been so enjoyable that the fighting spirit in me returned after years of being dormant. It feels great to play, pure and simple, and Street Fighter V is essentially a good game, but those issues…

The roster features 16 characters at launch and more DLC characters are on the way, so the roster will grow in the future. These upcoming characters (along with other in-game goodies) can be purchased via 'Zenny' (a.k.a. real money microtransactions) or 'Fight Money'.

Fight Money is earned through gameplay accomplishments such as winning matches or completing various modes, and requires no additional cash expenditure. I can't say how good the system is at the moment, though—the store where things are bought is blacked out until later in March, so the cost of items at the time of review is unknown. Hopefully, the in-game FM economy won't be completely undervalued compared to the cash-based Zenny.

Speaking of servers, I also experienced some online matches where lag was a major problem, and servers would occasionally go offline at unexpected times—dumping me straight back to the main menu even during single player modes.

When the servers are up and stable, SFV offers traditional player versus player fights (casual and ranked) and a survival mode where players must fight through numerous CPU characters to earn as high a score as possible. That's it! Even something as simple as that fighting game staple, the traditional arcade mode, wasn't available.

Initially, a group of friends and I all planned on getting SFV day one until we learned that casual lobbies only include one other spot besides the host. We were quite surprised to see that eight player lobbies won't be available until March (if all goes well) so my friends decided to postpone their purchases and I was left to battle the randoms of the world, for better or worse.

For players who don't relish trying their luck against anonymous opponents, there's not much game to be had.

Most players will be able to finish the included story mode in less than two hours, and I managed to see it all within one. The 16 characters each feature three one-round fights on average against enemies blessed with incompetent AI, which is not much. And after playing things like the recent Mortal Kombat, Injustice and even Guilty Gear Xrd, SFV's paltry offerings are an embarrassment. With fighters starting to include meatier story components for single players, seeing a top franchise make such a weak effort is more than disappointing.

While I enjoy the core gameplay and it's certain that more content will appear to flesh out this bare-bones package, I advise the casual crowd to seriously research this game before purchasing. As of the time of review, Street Fighter V is a technically brilliant fighter held back by a sheer lack of content. Hardcore fight fans have likely already purchased it and begun honing their skills, but for the rest of us this game won't reach its true potential for at least a few more months—and maybe longer. Rating: 6.5 out of 10


Disclosures: Street Fighter V was obtained via publisher and reviewed on the PlayStation 4. Approximately 4 hours was devoted to the single-player mode, and the game was completed. 9 hours devoted to online play.

Parents: According to the ESRB, this game contains mild language, suggestive themes, violence. There's no reason I can think of as to why kids shouldn't be allowed to play this. Violence is a regular occurrence with fighters, but there's nothing overly graphic or shocking here, except perhaps for some of the ladies' outfits.

Deaf & Hard of Hearing: There are subtitles for the story mode, so gamers with hearing loss should be able to follow what's happening. Playing online should be possible as well, though I imagine not being able to hear when attacks are announced might have a minor effect on reflex timing.