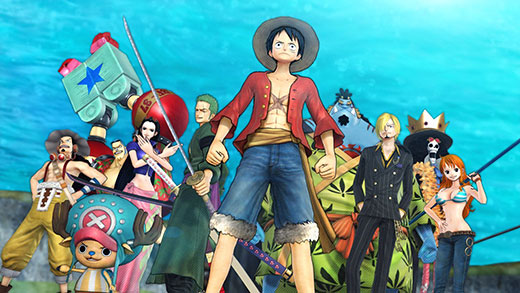 LOW It gets repetitive quick, and the camera is terrible.

WTF Who thought Buggy Balls was a cool name?

As a disclaimer, I've never watched the One Piece anime and only read a tiny bit of the manga. I'm basically a complete beginner when it comes to this series, and yet, it's because of One Piece: Pirate Warriors 3 that I'm wanting to learn more.

As someone who hasn't the faintest idea what's happening in One Piece, playing the game has given me a vague idea as to what main character Monkey D. Luffy's goal is. Apparently, he wants to become a pirate king and find something called the Grand Line, but the game tends to avoid explanations. Is the Grand Line a ship or a location? And why is this guy's body so unbelievably elastic? And what about these devil fruits? The game just sort of drops the name at one point to briefly explain how Luffy can stretch any part of his body. To be fair, this is the third installment in a series based on a property that I'm not familiar with, so I won't ding it too much for being confusing.

Befuddling story aside, the gameplay in PW3 is basically taking a character and smashing through thousands of foes in musou style, similar to the various installments of the long-running Dynasty Warriors series—hence the title.

Each character has their own unique combat style, but they all control roughly the same way. By alternating between light and heavy attacks or stringing them together, players can explore the variety of movesets and combos. Some attacks are best for dealing with crowds, while others are perfect for handling a single foe. Apart from the standard beat-‘em-up content, PW3 adds a twist called Kizuna Rush. While not exactly revolutionary, the Kizuna Rush summons up to four allies to fight alongside the player and unleash crazy combination attacks.

Missions follow the same rinse-and-repeat formula of heading to an objective, beating on countless peons, capturing some territories, fighting a boss or two, and so on. For me, this game was best played in short bursts because anything more than three missions in a row would put me to sleep.

To stave off drowsiness, I dipped into the multiplayer—both local and online multiplayer are offered. I had nobody nearby to play on my couch, so I went online. It was tough to find a partner, but I eventually connected with someone and we took on several missions. Unfortunately, online play mirrors that of the single-player experience, and I didn't stick around for long. Worse, I could only play missions that were already currently unlocked in the campaign, so in order to play online, I'd have to go through the singleplayer story anyway. Playing with someone else does make the game just a bit better, so not being able to go through the story with someone else is a total miss.

One Piece: Pirate Warriors 3 isn't terrible by any means, but Warriors games like this one take the "if it ain't broke, don't fix it" approach. The combat is brainlessly entertaining, but this sort of content only occupies someone for so long, and with no other improvements or expansions to the core play, I can't in good conscience praise this game. That said, I did find it interesting enough to want to find out more about the IP, and I strongly suspect those who are already fans will happily climb aboard this particular pirate ship. Rating: 6 out of 10


Disclosures: One Piece: Pirate Warriors 3 was obtained via publisher and reviewed on the PlayStation 4. Approximately 16 hours were devoted to the single-player mode, and the game was not completed. 2 hours were spent in multiplayer mode.

Parents: According to the ESRB, this game contains mild language, crude humor, suggestive themes, use of tobacco and violence. During my time spent here, I didn't notice 3 out of the 5 topics used to rate this game. The violence goes without saying, but it's harmless since there's never any excessive violence or blood. Every once in while a character may spout "Damn" or "Bastard", but it's mild stuff. I think kids 11 and up would be fine here.

Deaf & Hard of Hearing: There are only Japanese voice actors and this option can't be changed in settings. As such, subtitles always appear during gameplay, so it's totally accessible. There are no audio cues needed for play.