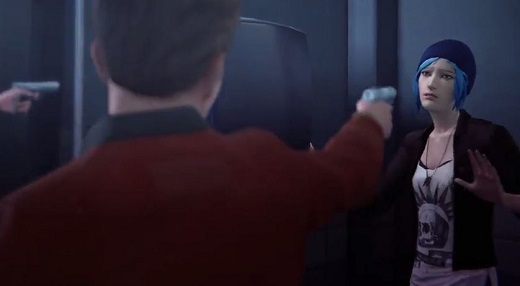 It's been quite a long time since I've been to high school. Leaving all of the social caste nonsense behind gave me hope to expand past such things, and I never thought I'd enjoy revisiting that time. But, thanks to Dontnod's Life Is Strange, I'm back to dealing with classroom drama and loving it.

The game begins with Max Caulfield, a shy, old-soul high school student. What's fascinating about Max is she isn't an epic badass chick, or one of those stereotypical ‘carefree' types. She's very introverted and the kind of person others would pass by, as if she were invisible. Because of this, I found her to be a great choice for the role of protagonist—not every female in games has to bare skin or have some overly-quirky personality, and I hope more developers realize that.

Structurally, Life Is Strange has an episodic formula with a total of five episodes spread out six weeks apart. Chrysalis begins at Max's school, Blackwell Academy.

Like most games in the point-and-click genre, Life Is Strange is simple to get the hang of. Controlling Max comes down to walking around environments until a point of interest appears. From here, players can manually walk up to it, or click it and let Max approach on her own. However, unlike other recent entries in the genre such as Beyond: Two Souls or The Walking Dead, QTEs have no place here. Instead, the gameplay focuses on the rewind feature.

While not as action-oriented as QTEs, the rewind feature enacts the well-known Butterfly Effect, where one small change can have large repercussions somewhere (or somewhen) else.

By rewinding time, Max is able to manipulate events and people around her. At one point, she witnesses an angry jock throwing a football that accidentally hits a girl on the head. If the player chooses to rewind time and warn the girl, the football misses and breaks a window. Of course, the game then announces that "this action will have consequences" and a decision must be made to keep the current action or rewind again to change it once more.

After every major rewind opportunity, Max monologues to herself about whether or not her changes needed to occur, and it's at these moments where I often find myself caught between the two potential outcomes—should I have stepped in to stop a girl from getting bullied, or should I have taken a photo and documented it instead? Even when I rewind time and try out both situations, Max questions whether it was the right call, and having the protagonist second-guess herself is quite effective at causing hesitation within me.

Besides its role in decision-making, the rewind is also necessary for solving puzzles. At one point, Max must move a posse of girls sitting on some stairs so she can get past. I wasn't sure what was required of me at first, until I noticed sprinklers turning on near the girls' position. By causing the sprinklers to go full-blast, the water hits the girls and they stand up, but they don't move out the way. I won't spoil the full solution, but the answer used the rewind power quite nicely. None of the puzzles are too brain-bending, though, but that's all right since the focus of Life Is Strange is definitely the narrative.

The story contains a likeable, colorful cast of characters. Max's best friend, Chloe, appears to be the typical punk chick who smokes ‘herbal remedies' and has a problem with authority, whereas Max's classmate, Victoria, seems to be the superior type who looks down on others. Plenty of opportunities were presented to spend time with these classmates of Max's and more, and I advise players to seek them all out. This is also a good way to catch many nerdy/gaming references placed throughout the episode.

Considering that only the first episode has been released, I can't say where the story is heading. What I can say is that the concept of rewinding and rewriting has much potential. If it delivers genuine variances based on player decisions, there could be many interesting outcomes, but it's too early to tell how much Effect the Butterflies will have. However, even at this early stage Dontnod makes it clear that Telltale Games isn't the only one who can make gripping adventure titles—I just hope that there's more to Life Is Strange than the illusion of choice. Rating: 8 out of 10.


Disclosure: Life Is Strange Episode 1—Chrysalis was obtained via publisher and reviewed on the PS3. Approximately 2 hours and 20 minutes were devoted to the single-player mode and the episode was completed. There are no multiplayer modes.

Parents: According to the ESRB, this game contains: blood, sexual themes, strong language, use of drugs, and violence. I can't speak for the rest of the episodes to come, but episode one had its fair share of warning lights. Strong language for sure with the F-bomb being thrown around. I didn't notice any blood, but there's a small moment involving sexting. Use of drugs and violence is also present. I would have my doubts about letting a child under the age of 14 play this.

Deaf & Hard of Hearing: Subtitles are presented for dialogue throughout the episode. Unfortunately, there are audio cues that go along with gameplay, which could make certain parts of the game a bit more difficult.

It’s an interesting game for sure, and it is worth noting that there is a Demo available that covers a reasonable chunk of the first episode so you can see whether it’s your thing.