A musical journey through multiple worlds 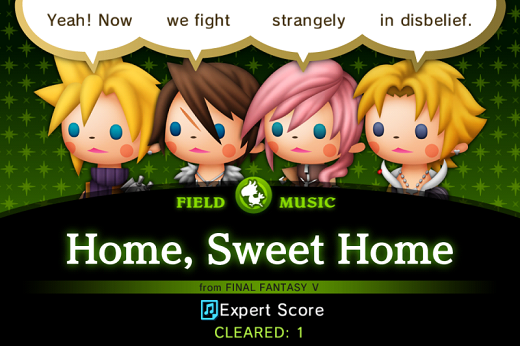 High: Tapping and sliding along to favorite Final Fantasy songs

Low: The story is as weak as wet tissue paper

WTF: Why are the character models so creepy?

Ever play a game and the music hits just the right spots?

I've come across a handful of titles with amazing soundtracks, and the audio is just as much a part of a good video game experience as the gameplay and graphics—and if you ask me, the Final Fantasy franchise has some of the best music in video game history.

Theatrhythm Final Fantasy: Curtain Call takes the massive amount of tracks from across all the FF-related titles and combines them in one place. As the follow-up to 2012's original, players can again explore a plethora of tracks and experience why the real-life Distant Worlds concerts are huge events.

Soundtracks from legendary titles such as Final Fantasy VII and Final Fantasy X are present. Even some of the more obscure games like Mystic Quest and Final Fantasy Crystal Chronicles are represented here. Between all the different entries, a total of 221 songs can be selected for the player's enjoyment—excluding DLC, of course.

Although Curtain Call is primarily a rhythm game about tapping the screen, it does feature a story, though its elements are weak to say the least. After watching the intro cut-scene, I've not danced my way across another moment of story progression moment since.

From the main menu, players can access standard music stages, and these are played to unlock quest medleys or versus mode. In order to succeed at them, players must tap the screen in time with the music, holding and following certain music lines or sliding in a direction shown for the appropriate notes. Chain combos are formed when notes are hits consecutively, resulting in a higher score and ranking.

The game supports both the d-pad and stylus during play. Making use of the stylus felt more natural to me than relying on pressing buttons, and more than once, I caught myself thinking about being a maestro at one of the Distant Worlds concerts. 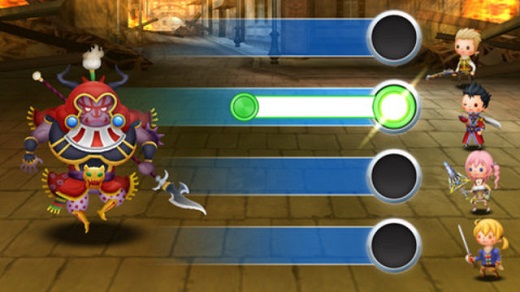 Performing quests is a simple task. Choose a mission, follow the routes while playing randomly selected songs, and then defeat the boss at the end—it may not be complex but it's a decent distraction. Finishing various quests or obtaining the in-game currency unlocks new characters. With over 50 to choose from (excluding DLC), teams can be mixed often.

The main reason to switch up the teams is to always have a balanced party. Some members function more efficiently than others thanks to their stats. An example would be how Tidus from Final Fantasy X has higher stamina than Cloud from Final Fantasy VII, and so forth. Teams should be built according to the needs of the stage about to be played.

At a certain point in each stage, a Feature Zone pops up. These zones allow for a special event to occur, but are determined by whether or not a note is missed within the zone. For example, if all notes are performed with a rating above "Bad", iconic summon monsters appear to lend a helping hand. A poor showing results in a measly chocobo showing up. By achieving strong summons, players can eliminate monsters quickly. When monsters are defeated, they drop items that can be useful to the journey ahead.

I definitely enjoyed playing Curtain Call because of its ability to put me in a rhythmic trance, but at the same time, it's something I'd play in bursts, rather than for hours at a time. The longest I spent in one sitting was probably about 30 minutes. After playing through a bunch of songs at once, the allure starts to vanish because there isn't enough variety involved. The stages and music may be different, but the game plays exactly the same no matter what mode is chosen. That said, I don't think Curtain Call is a bad game, it's just more suited for short bursts—I consider this the curse of rhythm titles.

Players who wish to experience the more competitive side of Curtain Call need only look to the versus mode. I've managed to squeeze in about 15 matches, and each one was absolutely exhilarating. Playing against the AI is one thing, but against another living, breathing person takes this rhythm game to a whole new level.

During this mode, players must maintain their HP while trying to outscore the other. To make these matches interesting, an EX burst gauge fills up as players successfully hit notes. Once filled, one out of nine different skills can occur, putting the opposite player at a huge disadvantage. Online and local play is available to challenge players both near and far.

With gameplay limited to simple taps and swipes, I realize that only a niche group of people would enjoy the time spent here, and honestly, I don't feel as though Curtain Call is a complete game—I prefer to think of it as an interactive music player. However, Square Enix bringing its classic music to the ears of many can only be seen as a good thing. Rating: 7 out of 10


Disclosures: Theatrhythm Final Fantasy: Curtain Call was obtained via Square Enix and reviewed on the Nintendo 3DS. Approximately 10 hours were devoted to the single-player mode, and the game was not completed. 3 hours was spent in multiplayer modes.

Parents: According to the ESRB, this game contains blood, fantasy violence, mild language and mild suggestive themes. Not to undermine the ESRB, but I feel like any age group could play this. I never witnessed any blood, the violence is at a bare minimum; there's nothing here to harm a young child's mind.

Deaf & Hard of Hearing: The ultimate way to experience the game in my opinion is with the use of headphones. The 3DS isn't loud to begin with, so hard of hearing gamers should use them. As for those suffering from complete audio loss, this should be a skipped adventure. The whole focus is based around music. Even if these gamers can still time the inputs correctly, not hearing the music is a huge chunk of the experience taken away.