This review was possible thanks to the power of sardines! 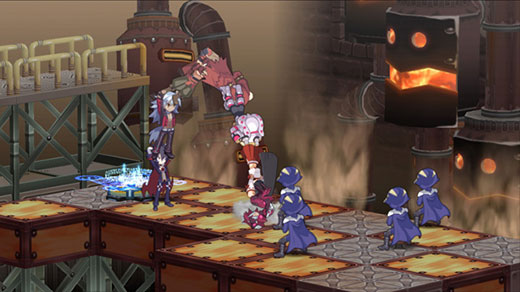 WTF What is with Valvatorez and those sardines?

When it comes to video games, there are few genres I'm not familiar with. However, I haven't played many SRPGs (strategy role playing games) and because of this, I almost turned down the opportunity to review Disgaea 4: A Promise Revisited

. That said, I've always had a curiosity about the series (mostly due to the stylish visuals) and decided it could be a good chance to branch out into unknown territory.

After spending quite a bit of time and struggling with its unforgiving nature, I came to an unsurprising conclusion: Disgaea 4 seems to have been developed with the hardcore fans in mind. It thrives on its complex battle scheme, making it quite difficult for newcomers like me to coast on through. Even the tutorial was mindboggling because so much information came at once, and there was a lot to digest. If not for tips I received from friends who've been playing Disgaea since the original, this review would have been difficult to write!

Luckily, I persevered and discovered exactly why fans stay loyal to the series. It happened in one of those infamous ‘Aha!' moments, and that's when I knew the rough patch was over… for that moment anyway.

As far as I can tell, Disgaea 4's story has nothing to do with previous titles, making it a standalone game. Things start out with ex-tyrant vampire Valvatorez and his crafty werewolf servant Fenrich in Hades. Why are these two imprisoned in Hades? Why did Valvatorez promise to stop drinking human blood? I had several other questions, and stage-setting issues like these should be brought up and touched on as early as possible, especially for newcomers who could get turned off by the lack of information. Luckily, the story is fairly nonsensical, and if nothing else, the dialogue is great.

Play-wise, Disgaea 4 is a turn-based strategy title with a grid-style map. During the player's turn, Valvatorez and his allies can perform a number of actions such as a standard attack (which can be enhanced if additional allies are standing next to the attacker) or special skills. These skills are performed through various animations ranging from fairly normal (summoning a swarm of bats) to wildly unexpected (transforming the area into a baseball stadium). Players can also stack party members on top of each other, a move known as a ‘tower' formation. Creating a tower unlocks the ability to reach previously unreachable areas and perform unique skills.

Throughout the story, new allies eventually join the party but creating a new member is also possible. Because of this, players can choose between two types of units; human or monster. The difference between both introduces even more strategy on the battlefield.

Humans can lift/throw objects and other characters such as allies or enemies. Monster units can't lift or throw, but they make up for this with access to the Magichange ability. By combining a human and monster unit using Magichange, a monster can turn into a weapon wielded by a human unit. Each monster unit represents a certain weapon (e.g. Catsabers are guns) so there are a number of combinations to be utilized here.

In addition to Magichange, Fusion allows two monsters units to be joined, creating a bigger version of said monsters. Fused units gain an increase in stats, can attack in a wider range and can absorb Evilities of fused characters. Of course, there are disadvantages to fusing as well. Movements are limited because of the additional amount of space needed to move and fused units become more vulnerable to enemy attacks. These disadvantages help to keep fusion from becoming too overpowered. If the fused unit loses all HP, both members expire, so it's a good idea to think ahead before fusing causally.

Disgaea 4 is chock full of content, most of which I haven't discovered as I write this review.  For example, take the Cam-pain HQ feature, a completely different section apart from the story mode.

Represented as a grid-based map, Valvaltorez's HQ allows players to perform a wide variety of actions. Keeping with Disgaea's political theme, players can appoint party members to a Cabinet, attend senate hearings to increase the odds in their favor, and can even discipline captured enemies! There's a ton to explore here, and I barely scratched the surface. This is due in part to the lack of information available. With barely any tutorials on what to do, players can easily find themselves lost on what the purpose of it all is. A more overt guiding hand would have done wonders.

Since A Promise Revisited is the Vita port of Disgaea 4, all the DLC previously on A Promise Unforgotten is included. Some mechanics have been tweaked, and new characters are included. There's also a new scenario where Valvatorez and Artina's past is explained. In short, this is the ultimate edition to have.

I'm really glad I decided to take on Disgaea 4: A Promise Revisited

despite the steep, steep learning curve and the "fend for yourself" approach. I'm guessing that its audience will likely be fervent series fans and very few newcomers (like me!) but it has a lot to offer to any fan of SRPGs. Countless hours can be spent leveling up characters and enjoying the massive post-game, guaranteeing high replay value for all comers. That said, for people like me, just experiencing the end of the game is probably enough—I'll leave the hundred-hour playthroughs to someone else. Rating: 8 out of 10


Disclosures: Disgaea 4: A Promise Revisited was obtained via publisher and reviewed on the Vita. Approximately 44 hours were devoted to the single-player mode, and the game was not completed. No time was spent in multiplayer modes.

Parents: According to the ESRB, this game contains animated blood, drug reference, fantasy violence, language and suggestive themes. Personally? I wouldn't let a kid under the age of 16 play this game. Cursing does happen often and there's some pretty crude sentences tossed around. Not a kid-friendly game.

Deaf & Hard of Hearing: Story is told through text dialogue with voice acting. I did notice, however, that the game's music often covers what characters are saying at times. Lowering the BGM volume should solve the issue.