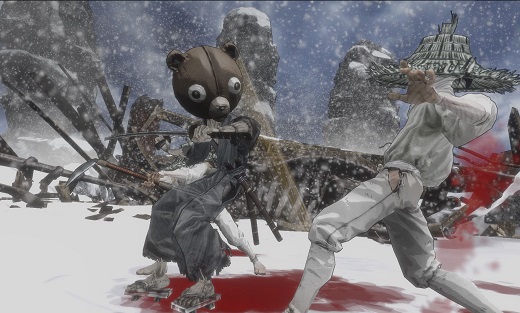 WTF Why was this even made?

I'm going to come right out and say it: Afro Samurai 2: Revenge of Kuma Vol 1. is one of the worst games of 2015, and possibly one of the worst of all time. This game is so horrendously terrible, it begs the question as to why it even exists in the first place. As a fan of the anime, movie, and 2009 title developed by Bandai Namco, I feel as if I've been slapped in the face by this monstrosity. I initially questioned why the game had a stealthy launch with no fanfare, but now that I've gone hands-on with it, the answer is clear.

Before talking about the rest of the game, let me state that Afro Samurai 2 gets the hip-hop/feudal Japan vibe right, and it's reinforced by music from RZA of the Wu-Tang Clan coming in full blast during combat and setpiece moments. Unfortunately, this is the only decent part of the game. Everything else is a disgrace to the Afro Samurai lineage.

Let's start with the story. It's so poorly done and confusing, I had a hard time just following what was going on. A lot of the problem is the way flashbacks weave in and out of the present—one moment I'm fighting samurai as adult Jinno (also known as Kuma) and the next thing I know, a cut-scene plays with a child version of Jinno pinned down by the very same samurai I was just dueling. I'm pretty sure question marks were literally floating around my head. Audio glitches with dialogue bleeding into the wrong scenes didn't help, and the cheesy chatter runs on way too long in any case.

The combat system is a bogus descendant of the original Afro Samurai. In the previous installment, different moves like kicks, light and heavy attacks each meant different functionality. This time, only a single button is needed to finish the game despite the fact that Jinno/Kuma has three "different" styles to choose from. There are slight changes to the core combat in these styles, but absolutely nothing that warrants use from the player. The only helpful style is the first, because of how quickly Kuma can dispatch foes—a finishing move instantly kills enemies after building a combo, and a rage move obliterates them instantly regardless of combos. These helped get me through the game swiftly, and since I wanted to be done with it ASAP, this was a good thing.

Technically, the game is full of glitches apart from the audio issues I already mentioned—things like enemies dying for no apparent reason, the Arkham-style countering during combat being totally unreliable, and the framerate dropping into the single digits for long stretches at a time. It was also incredibly annoying that it's hard to tell when Kuma is about to die. The onscreen information (the condition of Kuma's helmet) just isn't clear enough. Thank god the whole thing clocks in at around two hours or so… I couldn't take much more.

I could go on and on, but there's no question that Afro Samurai 2 sports questionable design, is broken in many ways, and is generally unworthy of anyone's time or money. I wouldn't even recommend this to the hardest of hardcore fans of the series. Why the developers and publishers let this game hit the market, I'll never know. Rating: 1 out of 10


Disclosures: Afro Samurai 2: Revenge of Kuma Vol 1.was obtained via publisher and reviewed on the PlayStation 4. Approximately 2 hours were devoted to the single-player mode, and the game was completed.There are no multiplayer modes.

Parents: According to the ESRB, this game contains: intense violence, blood and gore, partial nudity, strong language. If for some particular reason, a person decides to buy this game, it's safe to say the game is not recommend for little ones. There are gruesome images of dead children, the language is indeed strong, and the game is very bloody. The mature rating fits perfectly here.

Deaf & Hard of Hearing: There is no option for subtitles in Afro Samurai 2, so gamers suffering from hearing loss will not be able to follow along here. While the story is confusing as-is, having no subtitles at all doesn't help.