Old-school shooting for a new generation 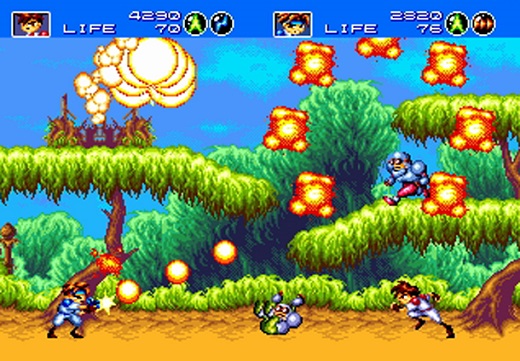 WTF Why are most of the characters named after colors?

As a blast from the past that holds no qualms with abusing gamers' egos, 3D Gunstar Heroes is a fine example of how a diet of modern games can soften levels of raw skill. This old-school shooter had my hands in pain after mere minutes (okay, it could have been the 3DS buttons) but oddly enough, the pain was worth it.

Seeing how I'd never played the original Gunstar Heroes on the Sega Genesis, I wasn't ready for the carnage about to befall me. As a straight up run-and-gun title, players are required to go from one end of a level to another, blasting foes and acquiring upgrades along the way. Switching between weapons, combining them, and sliding away from danger are mainstays here. Gunstar Heroes also offers melee attacks for when the action comes close, and that's all there is to it—there aren't any tricky puzzles to solve or death-defying platforming sections to overcome. Skill is a crucial part of the game, however, and Gunstar Heroes is a tough nut to crack.

From what I can gather, what seems to have made Gunstar Heroes such a legendary title apart from the skill requirement is that it broke away from the conventions of run-and-gun titles of its time. For example, one-hit deaths were quite common then, but Gunstar applied a health system so that cheap deaths weren't as frequent. The game also has some notably smooth sprites, especially when it comes to the bosses. I'm guessing that for a title that came out in 1993, Gunstar Heroes had both the visuals and the gameplay tweaks needed to impress.

I managed to finish Gunstar Heroes after five or six hours by blasting through the game with the original settings. It resulted in a lot of deaths. In the first level I must have died at least ten times before defeating the boss. Needless to say, anyone who gets frustrated easily will find this game to be painstakingly hard to complete without dipping into some of the modern conveniences.

The concessions include things like Mega Life mode, which doubles the player's health. Gunslinger mode allows players to swap weapons on the fly rather than having to find them in-game. This tweak in particular makes the game much easier thanks to the homing weapon—combine it with the laser and a player would have to go out of their way to lose. The new modes are a double-edged sword, though. While extra lives and easy weapons make the game far more palatable to the modern player, they also drastically shorten the playtime Gunstar Heroes offers to those who don't want to tough it out.

The other new additions to this classic are graphical. First is the eponymous 3D mode which displays the game in (wait for it) 3D. That worked well enough, but what I enjoyed more was the option to change the visuals. ‘Normal' is how Gunstar Heroes would look if it had been created these days. ‘Classic' is what the game looked like back on the Genesis, with the screen warped to look stretched out and almost globular.

The new features in 3D Gunstar Heroes are good, but something noticeably lacking from this re-release were any options for online multiplayer. Local multi is present, but as someone who doesn't have any nearby 3DS friends, it was impossible to find someone to tackle it with. Without an online co-op experience available, I don't see myself coming back to it anytime soon.

While it's widely considered one of the best Genesis titles ever, I'd say the appeal is limited to those who have a sense of nostalgia for it. I'm glad I tried it, and with a bargain price it's worth a shot to those who want to educate themselves on this piece of video game history, but I'm guessing it won't hold much appeal to new-school gamers unless they've got a local buddy to play with. Rating: 7 out of 10


Disclosures: 3D Gunstar Heroes was obtained via publisher and reviewed on the Nintendo 3DS Approximately 6 hours were devoted to the single-player mode, and the game was completed. No time was spent in multiplayer mode due to a lack of local 3DS partners.

Parents: According to the ESRB, this game contains fantasy violence. Unless parents like their children to play nothing but Barney games, I see no problem with Gunstar Heroes being played by little ones.

Deaf & Hard of Hearing: There are no voice samples and barely any dialogue to read at all. Gunstar Heroes can be played on mute, and no hindrance would be had. It's totally accessible.