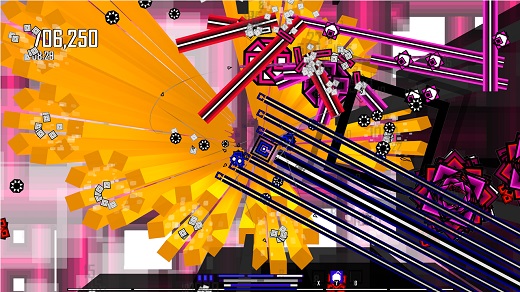 HIGH The music is brilliant!

WTF Can anybody speak that name without twisting their tongue?

In the shadow of a black hole I hide, waiting until everything before my eyes has been sucked beyond the event horizon and converged at a single point as compressed matter. As I drift further through a landscape of black and white, more shapes approach. Abstract, bizarre, familiar.

Another day, another encounter. Swiftly I dodge and veer through the field of clusters and mines, a field of incoming cubes and flares. Suddenly the homing missiles are there. Everywhere. They swarm me, and then everything turns dark. I am shattered and broken, but it doesn't matter. Purpose drives me, and so I keep on going in. I am a cosmonaut trapped in Zenzizenzic; the fourth dimension of bullet hell.

Zenzizenzic is a shoot'em'up (shmup) that throws more than a few targets at the player—it fills the entire screen with enemies and projectiles in all kinds of patterns. Survival in this inferno is its own kind of discipline.

Made by Dutch self-taught programmer Ruud Koorevaar, Zenzizenzic's shmup aesthetics are as eccentric as its name. Born from a lack of graphic skills, Koorevaar kept things simple and square. Literally. There are squares everywhere, and everything is composed of these four-sided geometric forms.

At first glance this makes everything look even more chaotic and confusing than shmups already do. Is this a bullet or an enemy? Oh, well… it killed me anyway. But once accustomed to this simplistic visual language, it actually becomes a strength. Through the reduction of complexity in shape comes clarity, especially when combined with an effective system of color-coding, like the one seen here.

On the Touhou scale of effed-up difficulty, Zenzizenzic probably scores somewhere in the middle. While harder difficulties are available, this only affects the spawnrate of powerups and players receive less points for kills, which in turn provides them with fewer special weapons and extra lives. So, while cranking things up encourages more tactical play, the levels and spread patterns remain the same. Diehard genre vets with a knack for memorization my feel a bit under-challenged.

Whether one has a taste for electronic music or not, the soundtrack is supreme and quite catchy. In fact, it's the secret star of the game. The simple aesthetics in combination with the music and color manages to leverage a distinct and moods for every level—the track 'Help' from level 50 comes with an almost melancholic mood thanks to whistles and reverb, playing over a scene where the only dot of color is the player. On the other hand, 'Purpose' from level 3 is upbeat and cheerful, with a slight undertone of yearning that reminds me of older Daft Punk tunes.

Zenzizenzic is a neat take on bullet hell, sans the Anime kitsch that it's usually wrapped in. For a debut project it shows professional execution and polish, and the catchy soundtrack should sweep players off their feet. With a price around ten bucks, it's a must-see for fans of the genre. Rating: 8.5 out of 10


Disclosures: This game was obtained via publisher and reviewed on the PC. Approximately 12 hours of play were devoted to the single-player mode, and the game was not completed. No time was spent in multiplayer modes.

Parents: This game is not yet rated by the ESRB or any equivalent agency. It's about geometric blocks shooting at geometric blocks and not any more violent than Asteroids was back in its day. It's fine for all ages.

Deaf & Hard of Hearing Gamers: Sound is not required to advance through the game.