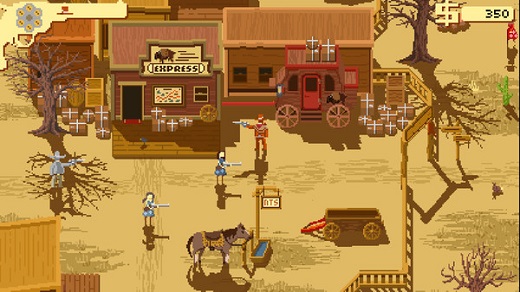 The GOOD: It's inspired by some of the finest Spaghetti Western material

The BAD: Playing the sister makes her a stand-in for the protagonist instead of following her own storyline.

And the WTF: "Making hats". Does it mean what I think it means? I think it does.

It could have been such a nice day, spent surrounded by the open prairie and the freedom of the Wild West.

While away chasing after a runaway buffalo, my family is brutally murdered and my house burned to the ground.

So begins my quest for revenge. So begins Westerado: Double Barreled.

Developed by the Dutch indie studio Ostrich Banditos, it contains the ingredients for a good spaghetti Western, complete with crime, retaliation, shootouts and sunsets—all of which are presented in a sophisticated pixel-art style from a top-down point of view.

Initially, all the player has is a gun, a will for revenge, and a clue as to what type of hat the killer wore during the raid. Step by step, the player gathers more hints about the scoundrel's appearance by helping out other characters. Of course, providing this help often boils down to gunfights.

Just like the inspiration on which Westerado is built, both drawing and firing a six-shooter are celebrated with special care. Each action has its own respective button, turning the procedure of firing a shot into a ritual and tribute. However, it takes only one missed bullet to turn a reverently-designed gunfight into a frantic shootout with dodging, hasty reloading, and firing saving ‘hatshots'.

In Westerado, players won't see life-points going down when damage is taken, but the information is instead shown via hats. Cowboy hats, bowlers, ten-gallon hats—any headgear that was common in those days. Taking a bullet knocks the character's hat right off of his scalp. Once all spare hats are gone, the next hit is deadly. Even if it's just a cosmetic design choice, I found this quirk to be emblematic of the wit and humor that the developers maintain during the adventure.

Another feature found in Westerado is the ability to shoot pretty much any character in the game. During conversations, people can be spoken to, threatened with the gun to provoke a change of heart, or gunned down in the street without a warning. The choice is there.

Of course, so much freedom has its price. If random innocents (or even worse, a quest-giver) is ended, the adventure might take an undesired turn. Depending on which path a player chooses, one of the multiple endings might make an appearance sooner rather than later.

While the main character's hunt for justice is the main focus of Westerado, no good adventure is without a number of sidequests—buy a new home, make a Southern belle swoon, meddle in the affairs between the natives and the cavalry, and more—there's a lot of stuff to distract from the business of vengeance.

The gameplay is solid, the presentation shows a love for detail, and the music is excellent. In fact, the only place where the developers wasted potential is the replay value. Multiple endings are nice, but the game misses a trick by not expanding on the storyline when players choose different protagonists.

For example, if a certain questline is followed, the hero's sister will become a sidekick, with her own sub-plot going on. Once the main story is done, a new game can be started with her as the star. But, instead of following her own specific tale, she's just a sprite-swap for the hero. I'd have enjoyed seeing her side of the story rather than simply repeating the Hero's missions with a different character.

Putting that one mis-step aside, Westerado: Double Barreled is a satisfying and well-rounded title that will be a surprising gem to anyone who enjoys a good Western-themed romp. Rating: 8 out of 10


Disclosures: This game was obtained via publisher and reviewed on the PC. Approximately 6 hours of play were devoted to the single-player mode, and the game was completed once. 1 hour of play was spent in local Co-op modes.

Parents: The game is not yet rated by the ESRB or any equivalent agency. As a game set in an Old West-setting, it contains use of firearms for resolving conflicts and animated blood, alcohol references and mature humor.

Deaf & Hard of Hearing: Music and sound cues are atmospheric only. All dialogue is presented in text form and sound is not necessary for progressing through the game. It's accessible.