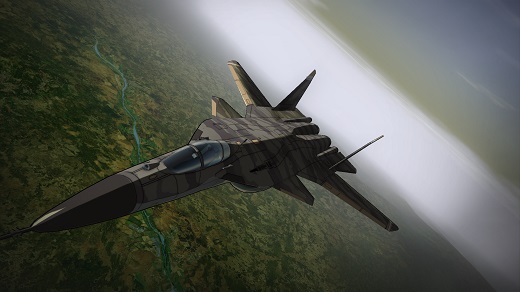 HIGH All the combat jets anyone could ever want, all in one game.

LOW The rest of the content has a long way to go.

WTF Some of the experimental aircraft designs from the past… Wow!

Last weekend I finally had a reason to dust off my old Saitek Cyborg Evo flight stick and give it some action again, and it was all thanks to Vector Thrust.

Developed by a relatively unknown studio in Portugal, TimeSymmetry, the game puts players into the virtual cockpits of more than 250 aircraft, or at least it promises to, and couches them all in a fast-paced action-arcade flight simulator.

It entered early access in February 2015, and already boasts a lot of things to try out, albeit being still very rough around the edges. At the time this review was written, the single-player game modes were the bulk of what was playable. The multiplayer mode was available as well, but it proved too unstable for extensive testing, so it will be largely exempted in this review.

From what I gather, the multi is something of a skirmish mode which allows the player to set up a custom sortie against the AI with the ability to choose everything including maps, planes, win conditions and more. Quick Match is another mode that does basically the same, but it throws pilots into randomly generated encounters, which is nice for a quick fix of air-to-air combat without having to bother with the setup.

However, the backbone of the game (at the point I spent time with it) was the Challenge mode. Here players unlock all the nice toys for the other game modes, done by completing aircraft-specific challenges before they can be added to the roster, including all sorts of tasks ranging from stunt flying to short combat action against the clock. People with a collector's mentality will gush over the sheer amount of unlockable planes, and the developers are taking suggestions on what to add next.

As a side note, it's worth mentioning that completing these challenges not only awards new aircraft, but also points that can be spent on skipping challenges that are too hard (or too buggy—more on this later.)

Last but not least, there's also a Campaign mode that currently has two playable mission sets. Here, only selected crafts are available, and they have to be unlocked with points earned within the campaign. While all missions were playable, they seemed to be works-in-progress with regard to presentation—there were some missing voiceovers, some missing mission descriptions, and so on.

So, getting back to my Cyborg Evo, a thing that's always important for flight sims is the input, and Vector Thrust is no exception here—a gamepad or flight stick is recommended! While the game is playable with mouse and keyboard, most flight fans will find themselves wanting the sort of control that that only analog can provide. It's not a necessity, but getting behind a distracted enemy and letting the minigun roar only feels good to me when there's a trigger under my finger. Pressing down on a key just doesn't deliver the same thrill.

Technically, Vector Thrust sports a distinct cell-shaded look. Whilst this gives a more simplistic, functional appearance than other flight simulators, it never comes across as cartoony or silly. As for the audio, most of it seems fairly solid. Sound effects feel authentic and buffed, and there's something truly satisfying in the buzz of the GAU-8. The soundtrack may be a bit too reminiscent of Top Gun, but I'm not going hold against the developers.

What I've described so far might sound like an attractive package to aircraft nuts, but let me restate that at the time of play, the game was still in early access. While there was quite a bit of content already, there was still lots of polishing to be done.

As mentioned above, some mission descriptions were MIA, some of the challenges were bugged, and I had the occasional crash. The lack of real tutorials or explanations on how to use weapon systems was a bit more off-putting. Some instruction on how to deploy flares and other countermeasures would have saved me quite a few deaths. I would expect these issues to be resolved for final release, but they should be kept in mind.

At the time I saw it, I was already thinking that military aircraft enthusiasts or Ace Combat vets would certainly have a good time with Vector Thrust if they could look past some minor issues and missing polish—the myriad of planes to master provides immense replay value. TimeSymmetry still had a big list of features to implement, but they displayed close communication with players and their feedback, and I'd expect the final release to be one to watch for. Retail launch is currently scheduled for the end of June. Rating: 7 out of 10.


Disclosures: This game was obtained via publisher and reviewed on the PC. Approximately 20 hours of play were devoted to the single-player mode, and the game was not completed. Less than 1 hour of play was spent in multiplayer modes due to its unfinished state.

Parents: This game is not rated as of yet by the ESRB or equivalent rating agencies. Explosions of aircrafts are the most, and only, visually explicit content—so an E10+ rating can be anticipated at the most.