A train ride with emotional baggage. 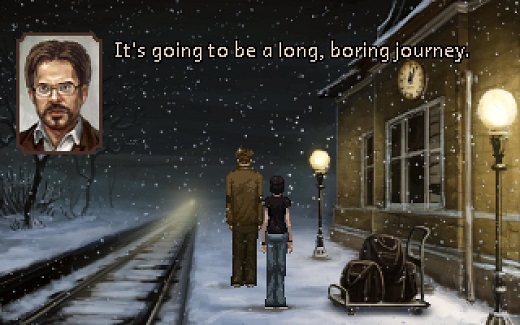 LOW: A snotty Millennial as a main character.

A girl from the city, living all alone and by herself. She boards a train in the middle of the night. Destination? Unknown. With her? A man she just met. No, this isn't the premise of an 80's rock song, it's the premise of The Charnel House Trilogy.

Developed by indie game studio Owl Cave and published by Mastertronic, The Charnel House Trilogy is an old-schoolish point and click adventure with a distinct mystery atmosphere and psychological horror elements.

For the visuals, the studio decided on ubiquitous-with-indies pixel-art. Despite its overuse lately, it's a choice that shouldn't deter anyone. There's a certain love for detail present in the design that pays tribute to this classic style.

The game's story is split into three chapters, but interestingly, the middle chapter was first developed as standalone game.

To avoid spoilers, only so much shall be told: The player assumes the role of Alex Davenport, a young woman trying to reconcile the events of the past months before she embarks on a journey via train in the middle of the night. This trip and the strange passengers accompanying her comprise the latter two chapters.

Whether everyone playing the game will bond with Alex isn't guaranteed, but the cast of the game feels well-developed and engaging. Charnel House takes its time to unravel all the little details and connections that make the player understand each person's motivations, and it feels just like a good mystery should.

With regard to gameplay, a heads-up should be given. Charnel House doesn't employ the most mind-bending puzzles. The focus is on story and narrative, so in general the solutions are usually at hand. Those in search of task-oriented challenge may have to look elsewhere.

Alas, good things come in small packages, and this also holds true here. With less than two hours for a playthrough, I was left wanting more. However, I mean this as a good thing, thanks to my enjoyment of the writing and intriguing characters. That said, while the adventure receives a sorta-wrap-up, the players are left with a teaser.

Ending the way it does adds a bit of sour dissatisfaction to the otherwise compelling experience, but those who enjoy being kept in the dark about certain things may count it as a bit of a plus, actually.

While the ending is debatable, what deserves praise all around are the sound design, music and voice-overs. Charnel House comes with a soundtrack composed for the project, with no generic stock music. Every track feels tailored to its respective situation, successfully delivering the atmosphere as needed. Also noteworthy is the rock-solid voice acting, with special credit going to Jim Sterling, who seemed to portray his role with an almost unsettling ease.

While the game employs well-established and well-worn tropes from the adventure genre, it successfully creates an eerie, compelling atmosphere, and the writing conveys a strong story. The Charnel House Trilogy is a short, but worthwhile trip. Rating: 8 out of 10.


Disclosures: This game was obtained via publisher and reviewed on the PC. Approximately 1.5 hours of play were devoted to the single-player mode, and the game was completed. There are no multiplayer modes.

Parents: This game is unrated by the ESRB, or any equivalent agency as of yet. Since it is clearly advertised as a game with horror and mystery elements, parental guidance is be advised for younger players. The game deals with death, anxiety and similar themes and features emotionally disturbing scenes.

Deaf & Hard of Hearing: All necessary dialogues are subtitled, and important sound cues are underlined by comments from the characters or are otherwise indicated.

I admit I’m hesitant to try this out. I played Sepulchre back in 2013 and found it to be an abysmal story, so unless they’ve greatly changed that chapter so it actually makes sense and delivers on the horror, or unless the two chapters that bookend it are much better told, I think I’ll pass.