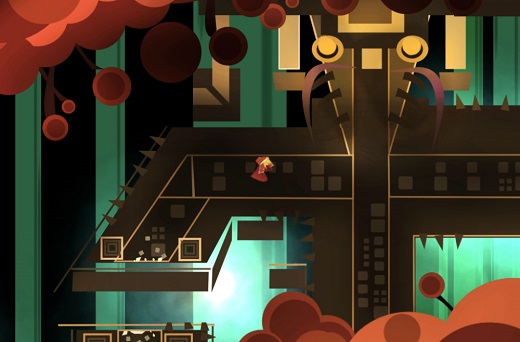 HIGH The visuals carry the mood quite nicely.

LOW It's short and slow.

The world is in disarray. Polluted and weakened, the animal gods have forsaken their duties. A lonesome hunter, "Thistle" by name, is roaming their sanctuary, striving to restore the balance of nature.

As an action-adventure with dungeon segments and an open world to explore, it has the potential for a Zelda-like experience. Unfortunately, despite the rich atmosphere, it desperately lacks refinement and depth in its gameplay. Animal Gods starts off with promise, but rather quickly reveals its shortcomings.

There are only three dungeons plus a final segment, which immediately suggests a very short length. Each of these levels can be tackled in any order, and is dedicated to a different mechanic: sword, bow and a teleport cape.

Focusing the levels on one item at a time would make sense in a larger adventure, since it provides the player with ample opportunity to get accustomed with the abilities. Unfortunately, these powers are taken away from the player soon after they're acquired and the game is just four levels. It's almost as if the budget ran out during production. With this brevity, there's simply no need for such elaborate training, and nothing follows that warrants the preparation.

Looking at what's actually here, the only challenging section is the teleport cape area and its platforming puzzles. The other two dungeons are rather straightforward. In the endgame segment the player gets to use all the abilities together, but there's not much freedom to experiment with them, and there's not much content there in general.

The graphics in Animal Gods are surprisingly cute and soulful. Instead of going with the pixel art style popular in the current indie scene, the developer chose something more akin to vector-style art. The visuals flow and melt between clear shapes and atmospheric color palettes, and it's a decision that benefits the mood it's trying to evoke.

Animal Gods sports a calm, relaxed soundtrack. The overworld is filled with lush ambient sounds, while the dungeons have their own unique feeling. Together, the audio and visual aesthetics generate what is supposed to be a "zen-like journey" experience, as the promotional text advertises. The overworld is genuinely peaceful, I'll give it that.

Cute but ultimately forgettable, Animal Gods is a slow, short ride that some will enjoy, but it's not much more than a pleasing time-killer that's over before you know it.  Rating: 6.5 out of 10


Disclosures: This game was obtained via publisher and reviewed on the PC. Approximately 2 hours of play were devoted to the single-player mode, and the game was completed. There are no multiplayer modes.

Parents: This game is not rated yet by the ESRB or any equivalent organization. This game contains fantasy violence and can be considered for a E10+ rating.

Deaf & Hard of Hearing: No issues, and subtitles are present.