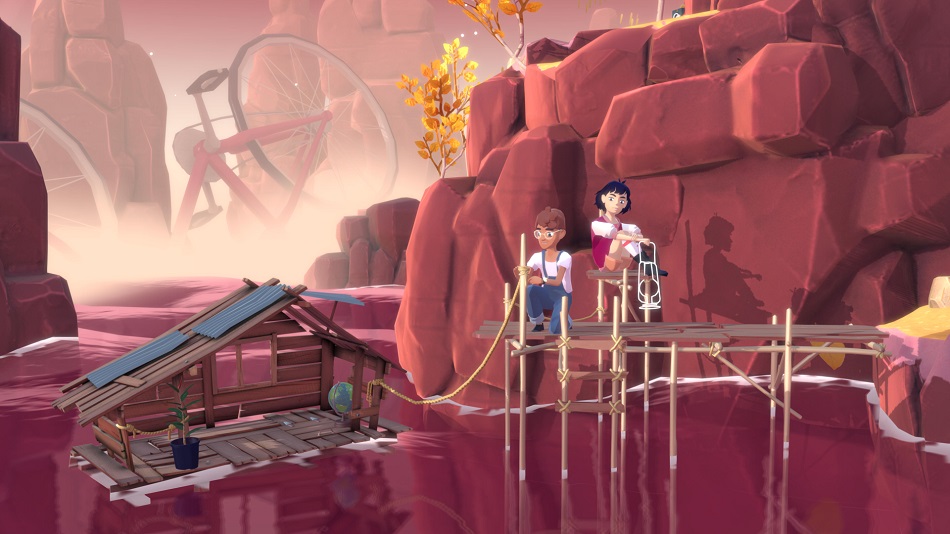 WTF Being somehow nostalgic for things I didn’t experience.

Pop-up dioramas fill an ocean brimming with memories within the confines of a treehouse as a small boat barely big enough for two slowly sails back and forth through it, manipulating time in an attempt to hold on.

The Gardens Between follows that boat and its young sailors, Arina and her neighbor Frendt. Through a series of time puzzles, players get to see a beautiful friendship flourish between a shy boy and adventurous girl as they make their way through islands littered with mementos of their time together.

Players have just the right amount of control over Arina and Frendt, as there are only two inputs to manage — the trigger and joystick to move time forward and back, and a button to interact with the environment. On each island there’s no choosing what direction the duo travels in, they simply move ahead on a preset route. 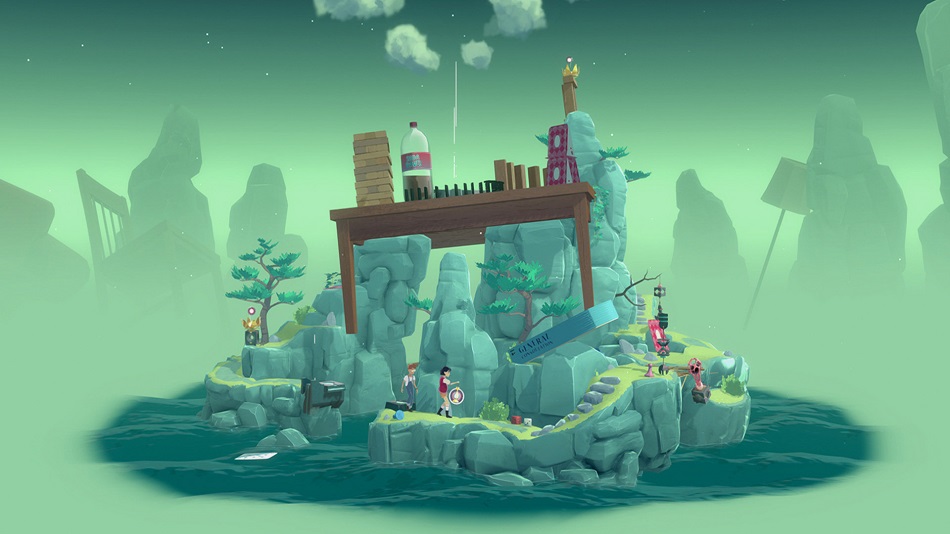 Arina leads the way with an empty lantern that she must catch light in while Frendt manipulates specific parts of the environment using devices on each island. The goal of each level is straightforward — simply bring the light to the peak of each area, but opening up a path of travel by manipulating time and items is the crux of each puzzle.

The difficulty curve between islands is superb. Beginning with the day Arina moved in next door to Frendt, players are taught the mechanics as they see the playmates navigate the diorama islands backward and forward, watching some pieces fall and others rise. A few levels dip into M.C. Escher-like perspective puzzles, but the challenge doesn’t lie in figuring out each new use for time manipulation, but in tweaking that same core mechanic in just the right way to allow passage. My initial expectation was that each island would be about finding a moving block that would deliver the lantern to the end of every stage while avoiding hazards, but there’s so much more.

There are clouded areas that dissolve when the lantern is lit — sometimes players will need to walk on these clouds without a light and other times the clouds will act as walls they need to pass through, so the solution isn’t always moving time but stopping it as well. In another part there are frayed wires strung throughout, and a leaky pipe above them. Players need to freeze time as a water drop passes through the wires to conduct enough electricity to turn on bulbs and clear a path. 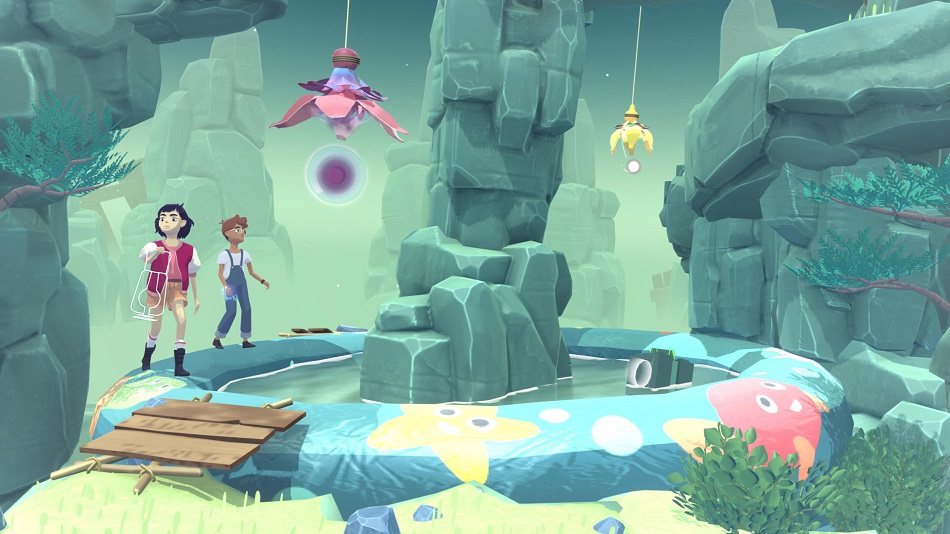 In other levels, players can expect to track down codes that the duo must input by jumping on a giant keypad in a specific order by jumping back and forth. Later, Frendt will isolate how time affects specific objects like a giant collapsing fossil whose bones open up different paths depending on when they’re released. The game only has one central mechanic, but the devs came up with many clever iterations on it.

The puzzles come in clusters of two or three and after a set of them, there’s a short .gif-like image that ties the items in each puzzle together. The aforementioned fossil and keypad, for example, form a memory of Arina and Frendt’s shenanigans during their trip to a museum. Little touches like these make The Gardens Between so wonderful. These memories weren’t mine, but they still felt important, like there was something for me to learn from them.

Despite there being no dialogue or text whatsoever, it was always abundantly clear how these two characters felt. Arina would get impatient with Frendt’s curiosity as she wanted to move forward, and when the two were separated, they would wave at each other just before meeting up. Reminders of the simplicity of childhood are baked in — things like the shy looks between new classmates or the overwhelming sadness of losing a favorite piece of clothing. These small displays of character made their friendship feel that much more real.

No good thing can last forever though, and as pretty and pleasant as the islands are, I couldn’t stay. After finishing a section, I often made Arina and Frendt run back and forth just to look at the details and to enjoy the complete, endearing picture, but that’s not how progress is made. I had to make them move on. Reminiscing on and remembering the past is sweet and often important, but we can’t spend too much time on it — The Gardens Between serves as a gentle reminder to anyone who may have forgotten that. Rating: 9 out of 10

Disclosures: This game is developed and published by The Voxel Agents and published by The Voxel Agents. It is currently available on PC, Mac, Switch, and PS4 This copy of the game was obtained via publisher and reviewed on the PC. Approximately 2 hours of play were devoted to the single-player mode, and the game was completed.  There are no multiplayer modes.

Parents: According to the ESRB, this game is rated E and has no descriptors. The Gardens Between is all about the joys of childhood and friendship, and nothing comes to mind as a potential reason to keep anyone of any age away from it.

Deaf & Hard of Hearing Gamers: There is no dialogue, nor subtitles or text of any kind here. One puzzle requires the tuning of a radio to different channels to make certain blocks move, but even this has clear, color-coded visual indicators to convey necessary info to players. It’s fully accessible. 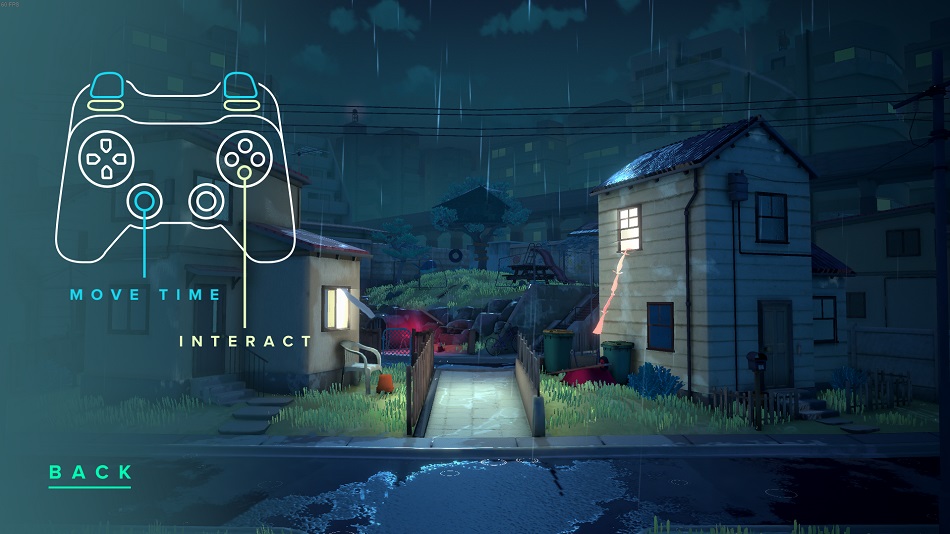 His PC and Switch are currently tied for the spot of his favorite platform, and he loves the dumpster fire that is Kingdom Hearts.
Latest posts by Kyle Bender (see all)
Tags: Kyle Bender Narrative PC Puzzle review The Gardens Between The Voxel Agents
Subscribe
1 Comment
Newest
Oldest
Inline Feedbacks
View all comments