Easy, Breezy, And Way Too Long 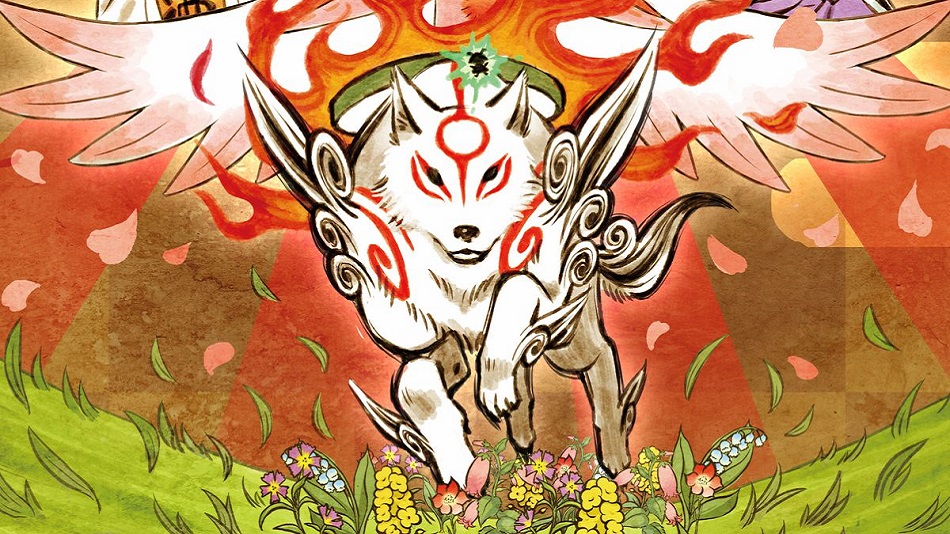 HIGH Had a ruff time getting over all the dog puns.

LOW Everything after the 15-hour mark.

WTF Why is Issun such a pervert?

Okami was an elusive title for me as a young, wide-eyed adventure gamer. I missed its original 2006 release along with every subsequent re-release and remaster, and only wanted to play it more with every iteration because being gasped at and nagged every time I said I hadn’t set the bar pretty high. Twelve years later, it’s safe to say it lived up to the hype … at first.

Set in a faux-Japan called Nippon, Okami is a third-person (third-canine?) adventure that follows Amaterasu, a goddess in wolf form who must take down evils throughout the land.

Chopping down a limited variety of demons and bandits in realtime combat between puzzles could’ve been a bore, but its focus is on the “Celestial Brush” — a weapon of the gods that players can use to briefly stop time, alter the environment or attack enemies. There are 13 brush techniques (with a few secret ones) such as slashing enemies, creating bombs and controlling the wind, and they’re all smooth to use. There are three different ways to use the brush on the Switch — The touch screen, a joystick, or motion controls, making this version of Okami the most accessible by far. 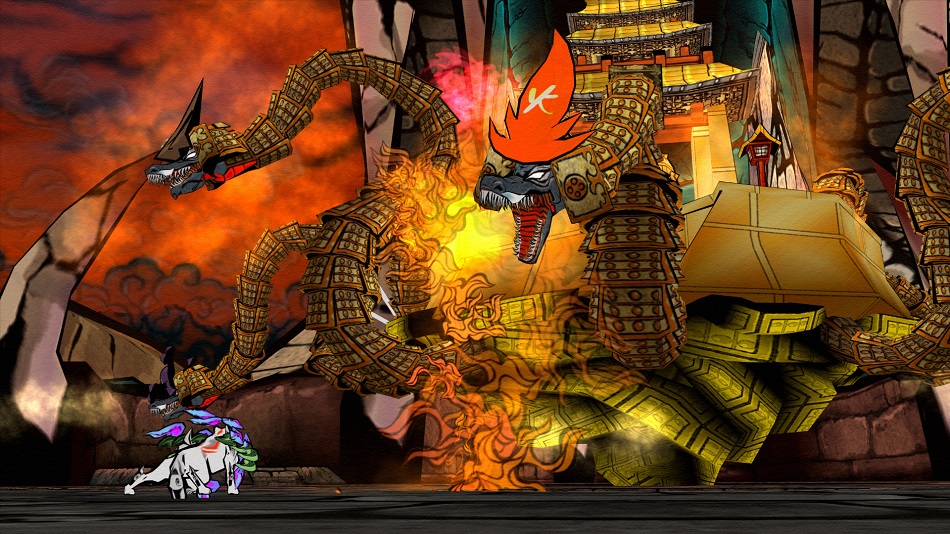 Unfortunately, in Okami’s real-time combat Amaterasu has access to swords, shields, and whip-like rosaries along with a jump and a dodge, all of which work a little too well. Certain enemies require a specific brush technique to disarm or damage them, but I found the most efficient way to deal damage was with physical weapons, which was happens to be the least engaging approach.

Drawing vines, lily pads, and trails of fire is distinct and engaging, but by the time I finished the first significant chunk of the adventure about 12 hours in, I already had 10 of the 13 necessary techniques. At that point, the wonder I felt was replaced by a sinking feeling that I wouldn’t be done drawing circles and lines for a while. There are a few interesting brush gimmicks that pop up in the last 20 hours of the game that give it a little life, but they’re only minor alterations. At the end of it all, it was a lot of fighting the same enemies in the same arenas and drawing the same patterns over and over.

Combat and brush usage aside, just seeing the world of Nippon remains breathtaking throughout. One of the most highly regarded parts of Okami is its aesthetic — a heavily cel-shaded style that has aged beautifully. Even though I had drawn a bomb over a cracked wall a million times, the path to get to said wall was always at least a pleasure to look at. 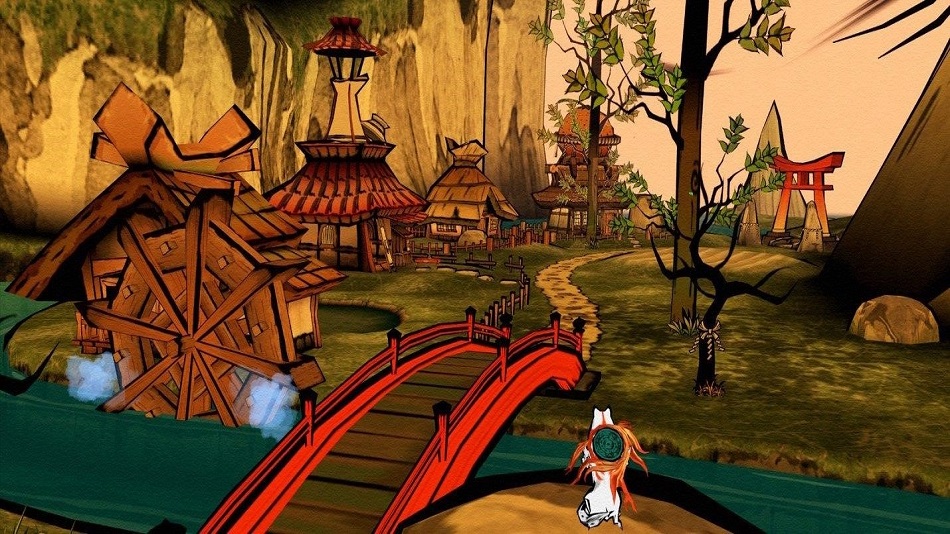 Okami is a lengthy game, and while almost everything about it is drawn out, this isn’t always to its detriment, like when Amaterasu gains praise points (experience) by feeding the wildlife. Each time she feeds a squirrel, deer, or boar, there’s a cutscene that is downright blissful — the camera circles Amaterasu and her loyal subject in a field of flowers for almost two minutes while a gentle melody plays in the background, and it may seem like a waste of time, but I let it play out every time because for me, it served as a great way to break up the repetitive combat.

During Amaterasu’s travels, players encounter an endless stream of unique, mostly lovable characters like Mr. Orange, the drinking, dancing leader of Kamiki Village, or my personal favorite, Big Daddy Jamba — a stoic, concerned bird who’s lost his daughter. Dialogue and cutscenes have a certain charm to them, but that charm can be occasionally stripped away by a small technical inconsistency. Sometimes dialogue can be sped up by clicking A or B, while other times it was mandatory to watch the text scroll slow to an absolute crawl. Thankfully, almost everyone has something worthwhile to say. Almost.

Throughout her journey, Amaterasu is accompanied by Issun, a bug-sized companion who is the blight of the narrative. He’s basically a more annoying and gross version of Navi from Zelda that spends all of his time providing needless hand-holding advice while ogling and judging every female character the duo encounters. Otherwise, the writing is witty and even squeaked out some laughs from me with ridiculous canine puns, but Issun’s dialogue was just something I couldn’t get over. At least it now serves as proof that some things have gotten better since 2006.

I can’t say that Okami will make it into my all-time favorites, but it’s memorable nonetheless. Exploring Nippon and meeting all of its goofy, painted inhabitants makes up for the repetition of combat, but it’s a shame that it didn’t quit while it was ahead — the excessive length and repetitive combat only served to dampen the things it got right. Rating: 7 out of 10

Disclosures: This game is developed by Capcom and published by Capcom. It is currently available on Switch, PS4, XBO, and PC. This copy of the game was obtained via publisher and reviewed on the Switch. Approximately 32 hours of play were devoted to the single-player mode, and the game was completed. There are no multiplayer modes.

Parents: According to the ESRB, this game is rated T and contains Blood and Gore, Crude Humor, Fantasy Violence, Partial Nudity, Suggestive Themes, Use of Alcohol and Tobacco. The biggest red flag here would be Issun’s dialogue as it demeans women and is a pretty clear embodiment of the male gaze. Outside of that, the heavily stylized visuals dampen the violence. Sake plays a vital role in defeating one villain and also doubles as a powerup for Amaterasu, and it’s most often acknowledged as a joke by NPCs.

Deaf & Hard of Hearing Gamers: Playing about half the game without sound, there were no issues with combat or problem solving tied directly to audio cues. Everything is well-represented on-screen . 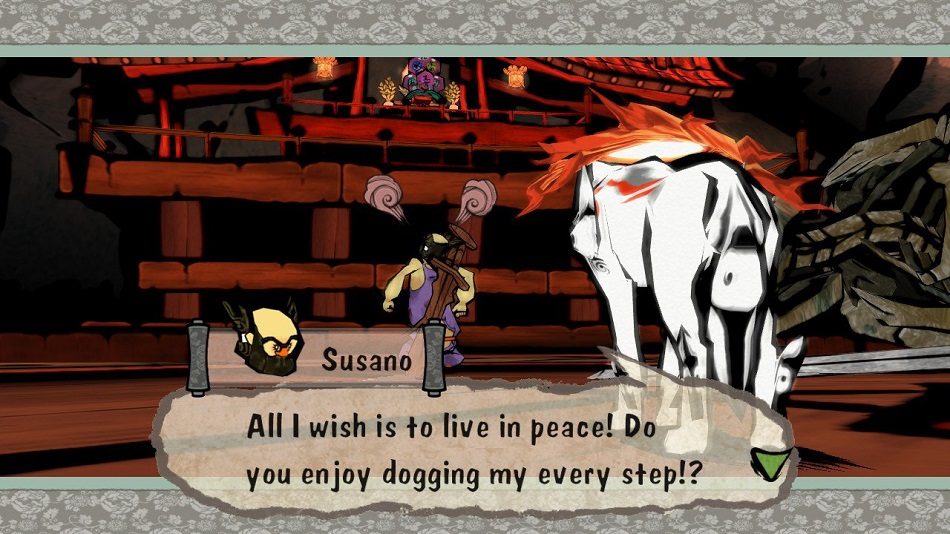 Remappable Controls: There is no control diagram. Camera control can be inverted on the X or Y axes. The paint brush can be used in three different configurations: Touchscreen, joystick, or Joy-Con motion controls. Otherwise the controls are not remappable