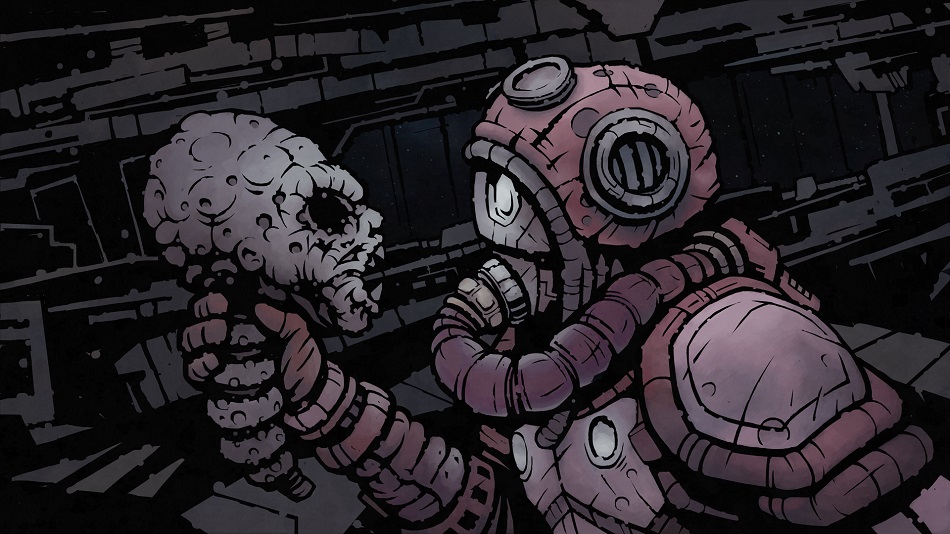 WTF Accidentally selecting the wrong enemy if they sway a single pixel into my cursor.

Let’s get one thing out of the way right off the bat — Deep Sky Derelicts is not Darkest Dungeon. The comparisons have been frequent and are easy to make given its turn-based combat and gritty comic-book aesthetic, but the similarities end there.

Developed by Finnish studio Snowhound Games, DSD is a roguelike deck-building dungeon crawler that sees players in command of three scavengers trying to rise above being “stateless” non-citizens in whatever sector of space they reside. Each party member begins as a class like a medic, bruiser, or technician with four item slots for specific types of weapons and tools, and a specialization upgrade available after a few level-ups.

The loot used to build characters is vital, as pieces of equipment and their mods provide players with cards to use in combat. Cards range from regular and AOE attacks to buffs for allies and debuffs for enemies — effects like altering the attack order and preventing a unit from using their cards. The early stages are gentle and easy to grasp, but Deep Sky Derelicts lacks a thorough tutorial explaining more advanced techniques. The only conclusion is that players are meant to learn the intricacies of combat as they fail, and fail they will. 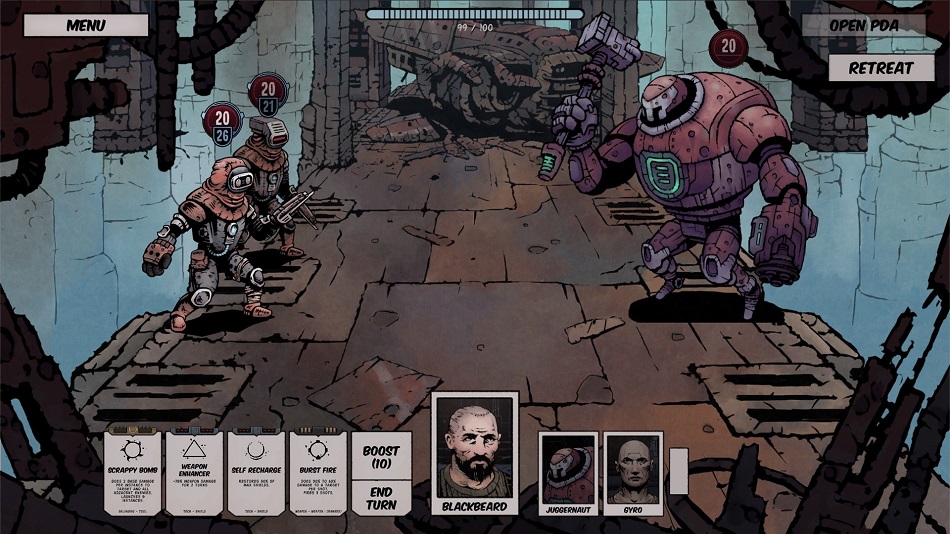 The conceit of the game is that players are scavenging abandoned spacecraft, but navigating these ships brings out Deep Sky Derelicts’ greatest downfall — the user interface.

Each ship is laid out in line with a grid, and to move from tile to tile, players must open up a menu and click on the next tile they want to travel to. When a searchable corpse, NPC, or enemies appear in a room, players are taken out of the menu to interact with them through dialogue, combat, or some choices that resemble a random encounter like trying to disable hazards or negotiating with a crazy passerby.

These interactions and the text supporting them add to the feeling of exploring an abandoned space vessel, my personal favorite being a run in with a man who wanted transfer his consciousness to a computer terminal to completely remove himself from humanity. But, the immersion that came with encounters like these was short-lived as I would inevitably need to re-enter a menu to get to the map and continue my journey. As the storytelling butted heads with the interface and mechanics, I was torn between seeing DSD as a straightforward game or as an immersive experience.

It wasn’t until I had completed a few derelicts that I realized what was bothering me so much about the UI and the presentation as a whole — it’s static and generally unpolished. For instance, the cards have descriptions, but the items are just images — a lot of which have identical thumbnails — until players mouse over them to see the description. Every time I was excited after picking up a new weapon, I had to mouse over my entire inventory just to find the one I wanted. 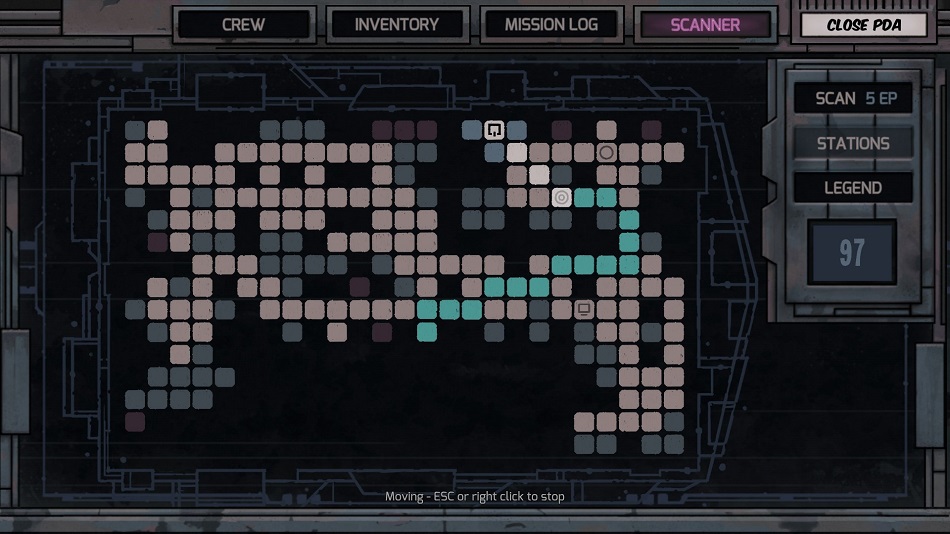 Also, players can sort their inventory by category (weapons, tools, shields, loot, and mods) but with the amount of loot and equipment that will be accumulated, this isn’t enough. When a player has a specific build in mind, there’s no reason they shouldn’t be able to filter by item level, base damage, or a specific stat boost, but the options aren’t there.

The other big missing component of DSD is movement. Animation in combat is scarce as scavengers and enemies sway back and forth between attacks shown through near-still images. A lot is left to players’ imagination as moving through the ship has no real look to it besides a blip on a map scooting around. Combined with the unnecessary amount of time spent in menus, this inert presentation made my drive to play wane quickly.

The saddest part about this situation is that the card combat is great! There are some serious balancing acts and tradeoffs in DSD that make the mechanics of building a team engaging — should I use mod A to get three more attack cards in my deck, or mod B to strengthen the attacks I already have? Do I want to abandon my medic to pick up another bruiser? Is a perk that gives me a 50% chance to draw an extra card if I have no explosives in my hand worth having fewer overall cards to draw from? There are choices at every turn as loot drops and ability points plentiful with another one waiting just around every corner, enticing players to go just a little further. 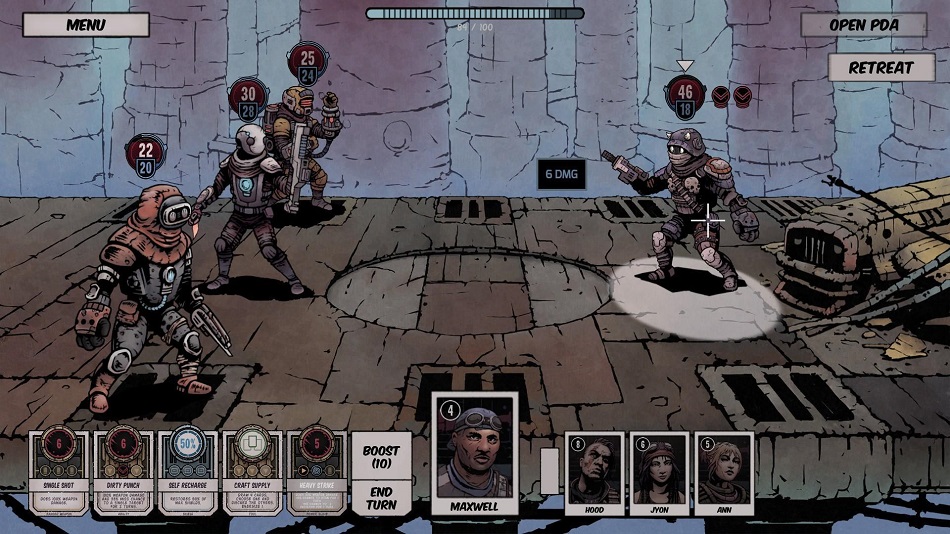 It’s a real shame to see such great card/strategy combat bogged down by its interface, but perhaps there will be updates rectifying some of these issues. From what I’ve read of Deep Sky Derelicts’ early access development updates, the team behind the game seems responsive to feedback. So, here’s to hoping that the rock-solid combat and deckbuilding are supported by UI and quality-of-life changes in the future. Until then, DSD will likely drift around in the endless void that is my Steam library. Rating: 6 out of 10

Disclosures: This game is developed by Snowhound Games and published by 1C Company. It is currently available on PC and Mac. This copy of the game was obtained via publisher and reviewed on the PC. Approximately 10 hours of play were devoted to the single-player mode, and the game was not completed. There are no multiplayer modes.

Parents: There is currently no ESRB rating, but it’s rated PEGI 12 for Mild Violence, Mild Violence In An Arcade Setting and Use Of Offensive Language. There are some pretty grisly stills of enemies’ heads or whole bodies sort of imploding after an attack, but there isn’t a whole lot of movement involved, so it’s not as intense as it could be.

Deaf & Hard of Hearing Gamers: After playing with sound off for a majority of my time here, there were no issues with how information is conveyed to players. No audio cues are necessary for play. All dialogue is subtitled, but the text cannot be resized. This game is fully accessible. 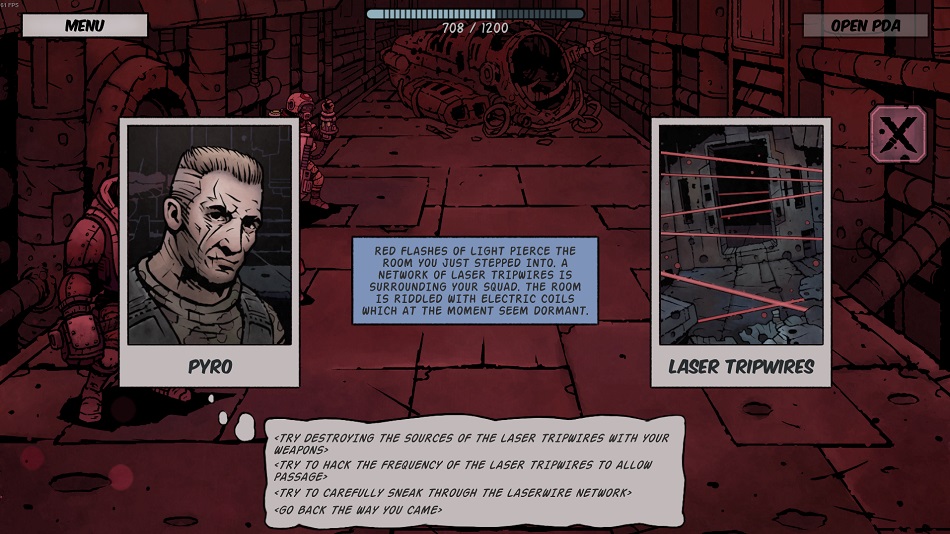 Remappable Controls: No, this game’s controls are not remappable. Almost everything is done with just the mouse here. Scrolling on the map handles better using WASD, but shimmying the mouse to the edge of the screen or clicking and dragging with a wheel click are viable alternatives.