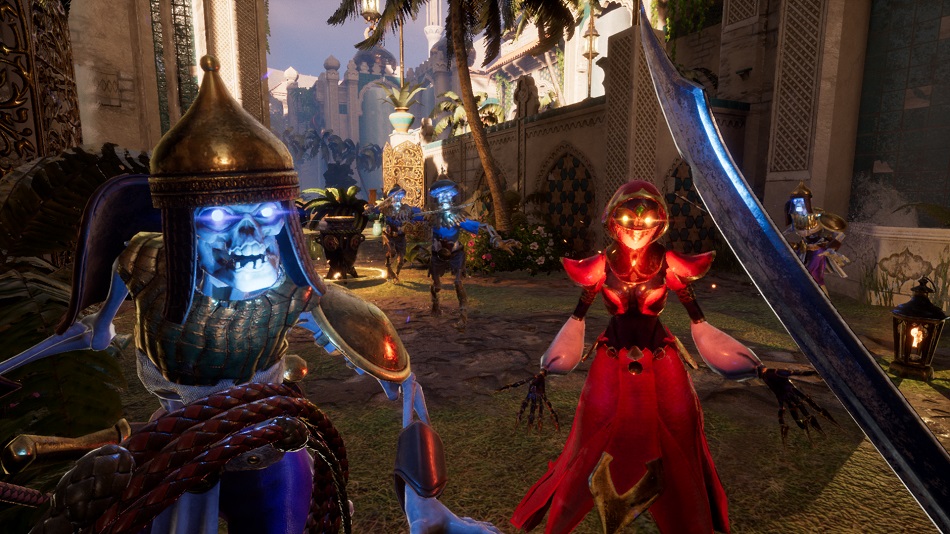 LOW The hitboxes are beyond inconsistent.

WTF Poison makes everything (even bosses!) go down in one hit.

There’s a worthwhile takeaway in every game, even if it’s generally poor. It can be a deep introspective realization or a touching moment in the story, but there’s always something there. With City of Brass, what I found was a reminder of how important it is that games be fair.

Set in a procedurally generated Arabian Nights-like setting, City of Brass is a roguelike with skellies, swords and loot. Players can slice up enemies and pocket an obscene amount of gold to spend on new weapons or power-ups like increased movement speed, throw range, and more. Every three levels there’s a boss to take down, and after four bosses, it’s time to start over from the beginning without any earned weapons or power-ups.

Unlike most roguelikes, City of Brass employs a first-person perspective — this is one of its most notable features, as well as one of its most problematic because its small onscreen reticle doesn’t cue properly to what’s directly in the player’s line of sight, leading to countless missed hits. For any game that prioritizes challenge, fairness needs to hold equal weight. Difficulty is no good if the player isn’t to blame for their own failures, and this is a perfect example of how City of Brass exemplifies this.

Equipped with a whip in the left hand and sword in the right, players can try to dispatch well-realized skeletons, wizards and other humanoids by slashing and tripping them, yanking them into one of the city’s endless traps, or simply throwing nearby pots. The emphasis there is on “try” though because City of Brass often feels like a game of chance more than one of skill. 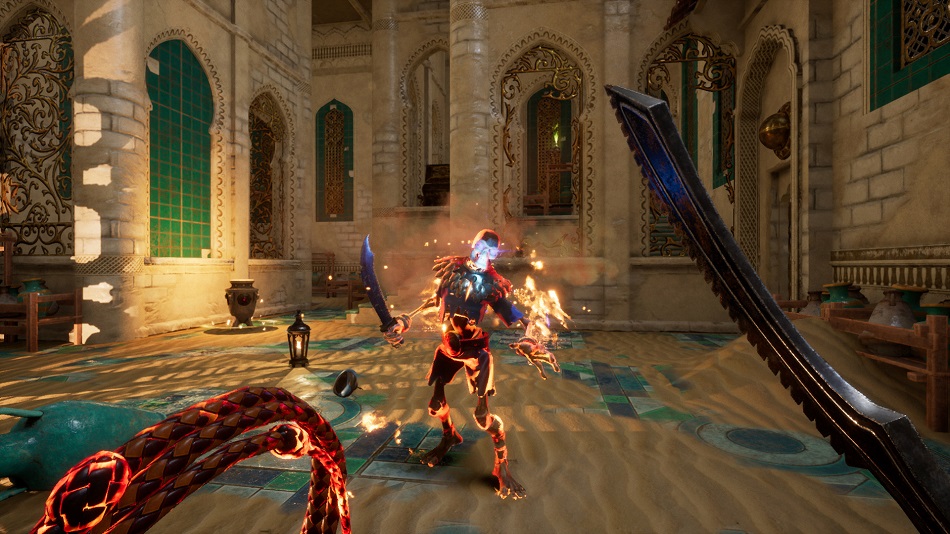 As another example of unfairness, each time I went to sweep an enemy’s leg or reflect a projectile with the whip, it was like flipping a coin. No matter the circumstances, I could never trust the hitbox of my whip to consistently land on anything, which becomes a massive problem in the back half of the game’s twelve levels when it’s vital for ripping shields away from enemies.This issue is only amplified by an invasive (even when toned down) aim assist that drags the reticle all over, and overabundance of traps throughout the city. Spiked floors, swinging blades and trapdoors are just a few of the pervasive inconveniences that slow down fights. As if clunky, poorly weighted movement and combat wasn’t bad enough, I had to split my attention between the architecture and enemies at all times to make sure I didn’t fall victim to a cheap hit from traps or an enemy behind me.Unwarranted chips off my health from unseen traps or misjudged hitboxes were irritating on their own, but they were made even more frequent by recurring frame drops. City of Brass is visually impressive with clean enemy textures and flashy particle effects, but on PS4 the framerate drops severely whenever there’s too much treasure or too many enemies onscreen. A drop in frames almost certainly means death as enemy movements become too sporadic to track.As a possible way of counteracting these shortcomings, Uppercut Games included the “Blessings and Burdens” system. This allows players to personalize the difficulty of their experience by decreasing the number of traps and enemies or increasing player damage and health. Real masochists may opt for the burdens that increase things like enemy health and trap frequency. In my experience, though, the blessings and burdens system only served as a means of (almost) ensuring fairness. With no adjustments, City of Brass is an uphill battle.

After equipping a few blessings, the playing field becomes a bit more level, but having the option to turn City of Brass into a slightly less frustrating experience isn’t enough to redeem it. A lot of roguelikes could stand to learn something about difficulty from the concept of the blessings and burdens system, but as for me, all I managed to dig out of the game’s mountains of gold and sand was that artificial fairness and difficulty can’t hold a candle to genuine polish and balance. Rating: 6 out of 10

Disclosures: This game is developed and published by Uppercut Games. It is currently available on PC, XBO and PS4. This copy of the game was obtained via publisher and reviewed on the PS4. Approximately 16 hours of play were devoted to the single-player mode, and the game was completed. There are no multiplayer modes.

Parents: According to the ESRB, this game is rated E10+ and contains Fantasy Violence. Some of the enemies are a little spooky, but nothing too harrowing. There’s no blood or anything unsettling, just particle effects and ragdolling.

Deaf & Hard of Hearing Gamers: There are some major issues with enemies spawning, starting attacks, or waking up out of the player’s line of sight. There are no visual indicators for any of these things, and they can lead to frustrating and unfair deaths. Also, there is no dialogue in the game, so there are no subtitles. 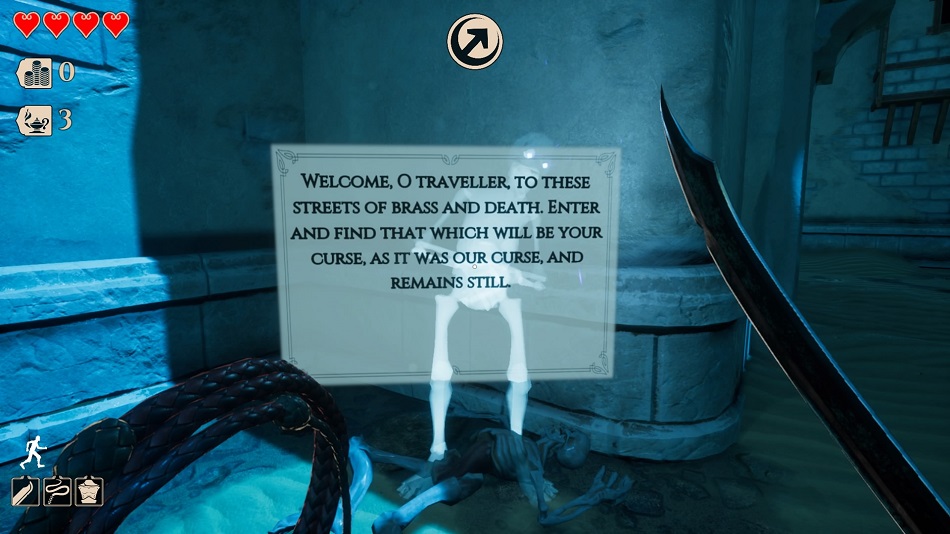 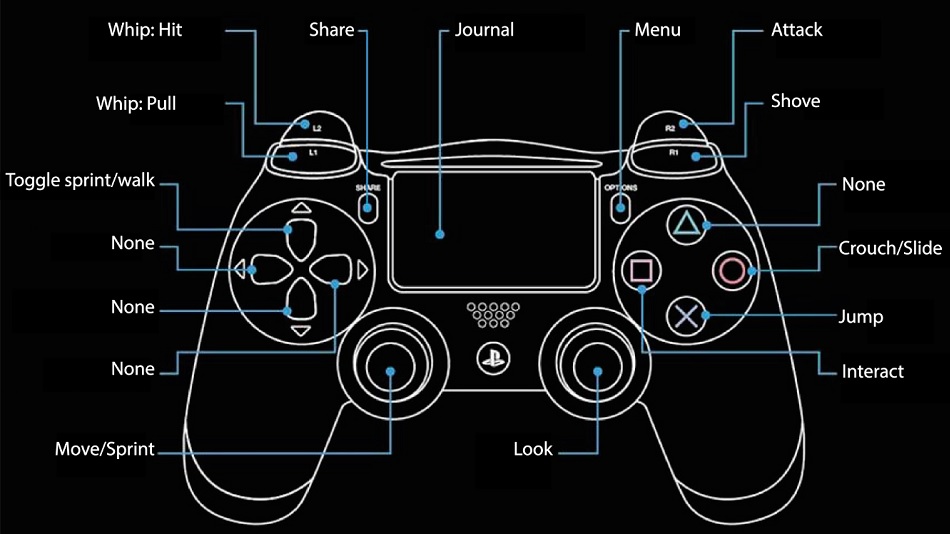 His PC and Switch are currently tied for the spot of his favorite platform, and he loves the dumpster fire that is Kingdom Hearts.
Latest posts by Kyle Bender (see all)
Tags: Arabian Nights City of Brass First-Person Kyle Bender review Roguelike Uppercut Games
Subscribe
1 Comment
Newest
Oldest
Inline Feedbacks
View all comments

So, what you’re saying is – stick with Ziggurat for now.

Seriously, if anyone is looking for a good roguelike in first person perspective – go play Ziggurat