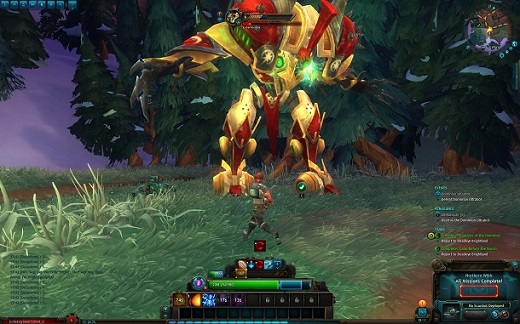 HIGH Finally, an MMO that demands my full attention and punishes me for slacking off

WTF Yet another highly advanced civilization leaves all their stuff lying around and then vanishes.

Raiding in World of Warcraft was a stationary experience; most raids didn't require too much movement from me beyond dodging a gout of acid here, or clustering near my fellow raiders for a shared buff there. When I tried out Rift, I hung back during instances, keeping one eye on my party's health bars and the other eye on my second monitor and Youtube. In Final Fantasy XIV: A Realm Reborn, I became adept at ignoring all the flashy spells going around me, keeping my attention focused only on the health bars going up and down between matches of Hearthstone.

WildStar slaughtered me the moment I looked away for longer than five seconds.

A sci-fi Western MMO, WildStar's story is standard futuristic fare with a bit of a frontier bent: an ancient civilization vanishes without warning, leaving behind a planet full of advanced technology. Two factions—the conquering Dominion and the rebellious Exiles—show up and start warring over the planet.

Of course it's up to the player to choose a faction and quest through the large, detailed, and colorful zones in search of loot and levels. To this end, the player picks one of six classes (three tanks, three healers, all DPS, with the ability to freely swap between roles) and a path that acts as sort of subclass. After deciding, a new player will wake up from cryogenic sleep on their faction's orbiting space ship and begin their journey to max level and all the loot.

Quite unlike other MMOs, movement is the defining attribute of WildStar, and players that don't learn to adapt will find themselves facing a steep uphill battle if they ever hope to do multiplayer PvP or raids. The driving mechanics behind this mobility, and the system that sets WildStar apart from its fellow MMOs, are combat telegraphs.

When certain spells are cast or abilities used, a large, highly visible field-of-effect appears to shows the range of the ability, where it will strike and if it affects multiple targets, and in some cases, it even shows the charge-up time or duration of the ability. Telegraphs are color-coded: blue for the player's own abilities, green for friendly beneficial powers (such as healing or buffs), and red for enemy debuffs or damage.

Learning to recognize these telegraphs and moving immediately to either enter the good ones or dodge the bad ones requires constant vigilance, as telegraphs are themselves mobile, often swinging to target certain players. In fact, boss fights can spew out red telegraphs in patterns of such complexity and density that the combat areas resemble bullet-hell shmups, and the player's the fragile ‘ship,' desperately sprinting towards the few clear spots of relative safety.

With such a heavy reliance on telegraphs, it's good that WildStar offers multiple options for adjusting the opacity of all types of telegraphs, and also includes options for color-blind players. In addition, WildStar's robust UI API and partnership with Curse mean there are a multitude of add-ons that allow a player to customize almost every aspect of their HUDs. As an example of how flexible it is, there's been a case of a legally blind player easily jumping in thanks in part to this focus on visibility.

The obvious effort and design put into the visibility, telegraphs and dynamic movement makes WildStar stand out from its peers, but it also presents a barrier of entry for players without action-game skills or reflexes, and it's a barrier that the developers acknowledge. As a result, even low-level dungeons require a degree of coordination amongst the party to avoid countless wipes. As such, I strongly encourage new players to find a guild to join. Thankfully, the WildStar community has been a positive force overall, and guild leaders I've met with have always been friendly towards myself and other newcomers.

Beyond the combat system, WildStar has all the trappings of a standard MMO. There are in-game auction houses, crafting skills that include cooking, armor-making, and weapon-making, customizable player homes, guilds, and the like. There's also endgame raiding for those dedicated enough to attempt the difficult attunement quests, ranked and unranked Arenas for those itching for competitive play, and achievements galore for the completionists.

As a package, WildStar is a difficult MMO filled with vibrant colors, guns and explosions, and by all counts it has succeeded in making itself memorable. The engaging combat engine is simple to understand, while allowing for an impressive array of depth. Zones are large and lushly detailed, and the writing does an excellent job of keeping both factions on the gray spectrum of morality. It's also good to see that the developers are very active, constantly working on patches to address balance issues and generating new content to extend the already-robust gameplay.

It may seem crazy to ask players to pay a subscription fee in the growing field of free-to-play MMOs, but if you ask me, WildStar is worth the price of entry. Rating: 9 out of 10


Disclosures: This game was obtained via publisher and reviewed on the PC. Approximately 80 hours of play were devoted to a mixture of single player questing and PvE dungeons.

Parents: According to the ESRB, this game contains: crude humor, fantasy violence, mild blood, mild language, mild suggestive themes, and use of alcohol. Despite the cartoonish character design, bodies explode into the chunky bits, curvaceous women abound, and the storylines involve lots of slaughtering of various races. Language is relatively mild, and in line with prime time drama television.

Deaf & Hard of Hearing: WildStar is completely accessible, with subtitles for dialog, mini-maps and on-screen arrows that show quest objectives and enemies, and very visible telegraphs that show most incoming attacks. Add-ons also exist that further increase accessibility for all types of players.