Engage All the Learning 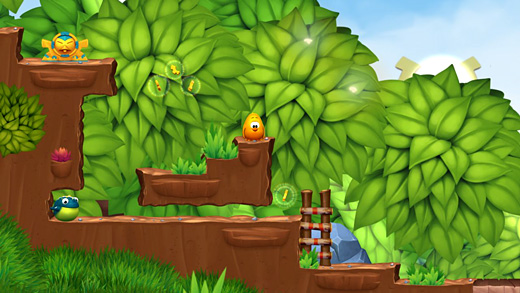 HIGH Pulling off a complex series of environment manipulations without a hitch the first time.

LOW Knowing just enough of a puzzle solution's to solve it wrong. For hours.

I want to hate Toki Tori 2.

I want to rage at it, because it continuously stymied me with puzzles that required creative, out-of-the box solutions.

I want to wring the neck of the protagonist—the plucky, always cheerful chicken/duck/bird Toki Tori.

I want to condemn the game's unrepentant lack of hand-holding, and its constant expectation that I will solve its mysteries on my own without giving me even the slightest hint that I'm solving its puzzles correctly.

…But I can't do any of those things, because Toki Tori 2 really does give me everything I need to solve its puzzles before sitting back and waiting for me to use my brain instead of ranting about how stuck I was.

And when I did, everything fell into place.

Toki Tori 2 is a puzzle game, with adorable graphics and upbeat music. It's easy to think that it's a game meant for children, with its cartoony graphics and simplistic playstyle, which makes it all the more fiendish when the difficulty begins to ramp up.

Toki Tori (the birdlike character itself) is only capable of moving, stomping, and whistling to affect the environment and other animals, and these simplistic manipulations form the basis for a difficult puzzle game that doesn't hold back when it comes to making the player think, and think hard.

Every creature encountered can be influenced in some way: stomping can cause a hermit crab to move away, making the platform it calls home cover a gap so Toki Tori can cross to the other side. Whistling can make luminescent moths approach, and illuminate previously hidden paths in a pitch-black cave. Some animals can interact with others, such as frogs swallowing bugs and belching bubbles that carry Toki Tori to new areas. 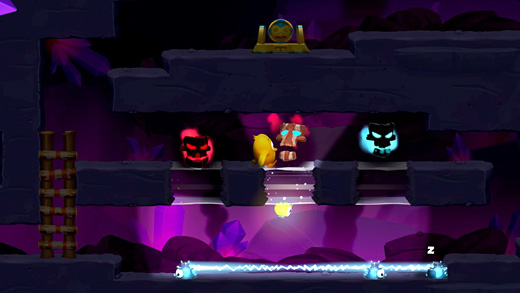 There are only a small selection of ways the player can interact with the world of Toki Tori 2, but the game twists all the possibilities into befuddling puzzles that often left me knowing where I was supposed to go, but not knowing how.

As one might have guessed by now, my biggest issue with Toki Tori 2 is its lack of explaining anything. Outside of the title cards, there is no text in Toki Tori 2. No dialogue. There's barely even a story, and it seems to be one of "Yellow bird sets out to save homeland from black gunk." What this has to do with collecting the golden doodads scattered across each stage is unclear, and collecting bits doesn't seem to actually influence the game in any way that I could discover.

Levels are not named, which made it difficult to seek aide whenever I became overwhelmingly stuck. How do I tell someone that I'm stuck at "the one place with the three box crabs and the river of lava?" But, the most detrimental example of vagueness is when the player is finally given an explicit task to accomplish beyond traveling from Point A to B.

Just one seemingly simple task ("Find pipe. Get frog to enter it.") stymied me for hours. I found the pipe and frog easily, but nothing I did could make it open. Finally, thinking I would find some switch elsewhere, I left the stage and went on to complete almost 85% of the of available stages.

As of this writing, I still haven't solved that puzzle, but at least I finally learned the solution (the pipe opens automatically when the frog gets close enough). How much time could I have saved if that one little point had been clearer?

Checkpoints are frequent, which is good as it's easy to kill Toki Tori or wind up stuck in an inescapable situation. Resetting back to the previous checkpoint is as simple as whistling a series of notes in a tune. However, touching the checkpoint saves the state of the world at that moment, so it's also easy to die just as Toki Tori reaches a checkpoint and enters an endless loop of death until the whole game is restarted.

One can also get permanently stuck in a location, unable to backtrack to an earlier checkpoint, whereupon the only recourse is to fast-travel to the nearest waypoint. Fast-traveling is fairly simple, but it has the side-effect of making the player solve all previously-completed puzzles again in order to reach the area they just left.

Less of a platformer and more of a straight puzzler, Toki Tori 2 is right up the alley of those that love games requiring unconventional thinking. Its easy controls and basic gameplay ensure that anyone can pick it up and try it, while its difficulty curve, frequent sticking points and general lack of explanation means that only the most determined will finish it.  Rating: 6.5 out of 10.


Disclosures: This game was obtained via publisher and reviewed on the Wii U. Approximately 16 hours of play were devoted to the game, and the game was not completed. There are no multi-player modes.

Parents: The ESRB has rated this game for everyone, and it should be accessible to all ages.

Deaf & Hard of Hearing: The game is very accessible; there is no dialog, spoken or written, and songs taught to Toki Tori are represented visually as well as audibly. There should be no barriers here.