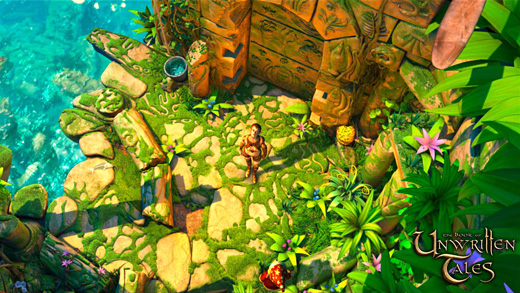 LOW Getting a fetch quest from magical, talking, invisible termites.

WTF How can zombies, ghosts, and ghouls exist in a world where death is explicitly stated to never occur?

An ancient artifact is discovered by an elderly archeologist. The archeologist is promptly captured by an Evil Empire so they can learn about it and take over the world. Said archeologist meets a Random Elf and charges her with retrieving his journal so that the leader of the Noble Alliance can get the artifact first. Elf comments on the fact that she is about to go on what will possibly be a Long Adventure in an unusual display of genre savviness.

And so The Book of Unwritten Tales begins…

This title is essentially a standard point-and-click adventure game. Roped into the narrative are three protagonists: Ivo (the elven princess), Wilbur (a gnomish mage-wannabe) and Captain Nate (a human pirate-rogue that complains about money almost every step of the way.) Whether the trio are working together or independently, the player guides them all into solving a handful of puzzles, with the bulk of the game consisting of fetching items for a dozen or so unremarkable non-player characters (NPCs).

The most memorable thing about The Book of Unwritten Tales is the environmental work. Each locale is large and lavish, filled with details and eye candy that I admired as I progressed through each area.

It’s nice that I found the setting enjoyable because the cast (main and supporting) seems to be culled straight from World of Warcraft—the first half of the game features human and gnome mages, and a dwarven stronghold that looks right out of Dun Morogh. The second half is practically The Barrens—a savannah that's home to a (mino)tauren shaman, orc warriors, undead scientists, and a two-headed ogre that's a battlemage, of course. And also a paladin.

Predictably, all of these people have fetchquests to give, and none of them will help the player until their items have been fetched.

I actually found it amazing the lengths the game would go to give me a fetch quest in lieu of a traditional puzzle, to the point where the game lampshades its own design via one character announcing that he's about to embark upon a series of pointless, tedious tasks.

Does he then go on to subvert these expectations in a unique and humorous way? No, he goes through the entire rigmarole anyway, and stretches the last third of the game into three hours of mind-numbing filler that does almost nothing to further the narrative.

Oh, and don't let me forget to mention: my reward for slogging through these quests? Another series of fetch quests!

Compare that to the game's earlier attempt at getting me to open a basement vault, a task involving light, mirrors, a pot of coffee, a monkey, and I'm pretty sure that was the Ark of the Covenant.

The difference in these tasks is striking. Certain sections manage to evoke feelings of SCUMM titles of old, and thus actually felt more like a proper adventure game. In the parts where these more intricate puzzles are absent, the game churns out fetch quest after fetch quest, with constant backtracking and tiny, unsubtle jabs at MMOs and World of Warcraft in particular.

The Book of Unwritten Tales isn’t bad—it just feels like the developers weren't sure if they would rather homage LucasArts or ridicule Blizzard, so they tried to do both. Sadly, they succeeded only in making both aspects tepid and bland. That said, I would honestly recommend it to people who love adventure titles because beneath the fetch-questing is a solid game with quirky characters, decent puzzles, and some amusing self-aware humor. Rating: 5.0 out of 10.


Disclosures: This game was obtained via publisher and reviewed on Steam. Approximately nine hours of play were devoted to the game, and the game was completed.

Parents: According to the ESRB, this game contains drug reference, fantasy violence, and mild language. While teens should be okay with the title, children should be supervised for a few of the raunchier bits.

Deaf & Hard of Hearing: Subtitles are available and there are no sound-based puzzles. The game is completely accessible.