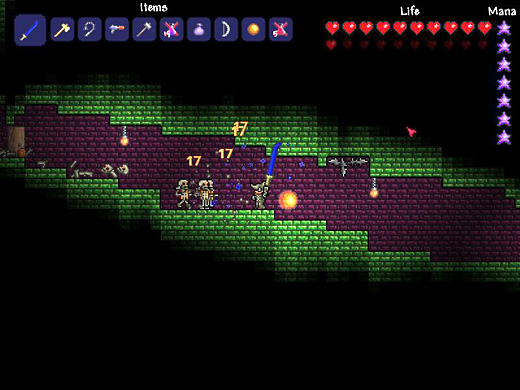 HIGH Flipping gravity and rocketing into the sky.

It was dawn when I woke up at the boundary between a desert and a forest, with no idea of how I had gotten there or how I would get away.  I didn't waste any time. Rather than focusing on the troubling how of my predicament, I set off into the woods to punch down a tree with my fists. I would need to fashion a shelter—out of dirt if need be—and for that I would need tools: an axe, a pick, and…Oh, wait. I already had an axe and pick, and even a sword. And there's an NPC over that little hillock that can tell me how to craft more items. And when night falls, I don't have to worry about creepers? Ah, Terraria

, a woman could get used to you.

I made myself a promise that I would go through this entire review without using the phrase "It's like Minecraft, but…" because to do so feels like a disservice to both games. Terraria is a fully realized game in its own right, and while it shares some superficial similarities to its 3D cousin, its focus on combat and exploration make it a different beast altogether.

Terraria presents to players a side-scrolling landscape with delightful 16-bit charm—everything from deserts to floating islands and the deepest levels beneath the ground are presented with a wonderfully vivid and colorful palate. It then encourages the player to tame the world in the way gamers know best: through vicious, bloody, and almost gleeful violence.

Chop up those slimes! Demolish that forest! Re-route that lake! A hotbar provides access to a wide array of equippable items such as axes for chopping down trees, picks for demolishing dirt, sand, copper, and other gatherable materials, and a nice variety of weapons, items, and consumables can be used by selecting the item and clicking the world with the mouse to use it.

Making new things only requires standing next to the appropriate crafting structure, be it an anvil, a forge, or a crafting table, and opening the menu to reveal a list of items that can be fashioned with the material in the player's inventory. Erecting buildings requires nothing more than putting the material in the hotbar and clicking a clear spot on the ground to place a block. Throw in plenty of craftable furniture and soon players can have a base of operations as elaborate or plain as their inner architects desire. But, do it all swiftly. When night falls, the innocent bunnies and (mostly) harmless slimes give way to the evil denizens of the night. 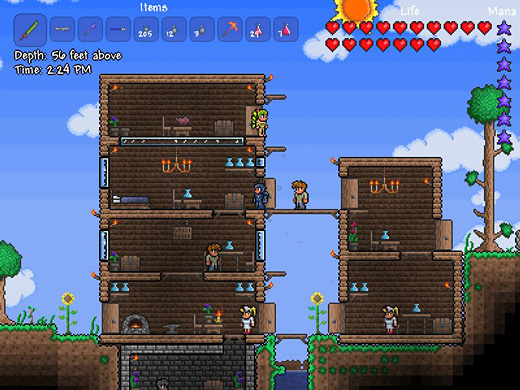 Terraria, for better or worse, does a good job of making its player feel suicidally competent; NPCs can move in to specially prepared player-built rooms to remove the sense that the player is the only human in a bizarre world, the side-scrolling perspective means monsters are visible long before they become a threat to the player, and even if death occurs, it's nothing more than the loss of half the gold being carried and reviving at the initial spawn or last used bed. The player's inventory is left intact.

Chests are scattered throughout the game world, and while they usually contain miscellaneous things such as torches, arrows, grenades or other consumables, some of them contain accessories or even weapons that the player can't craft. After only a few chests, I was double-jumping across chasms and anchoring myself into gold veins in the ceiling with my grappling hook. Potions, too, add a variety of neat and short-lived effects, from the standard healing and magic regeneration bottles to the hilarious and high-flying Gravitation Potion that let me fly across the countryside upside-down and trailing sparkles.

Pretty soon I was decked out in golden armor, with golden tools, and dominating the upper levels of my mine with relative ease, but something was missing. I was growing bored with the ease I had acquired my wealth, and worse, I couldn't seem to figure out how to get the items required to smelt all the demonite I had found, which meant I had run into a technological brick wall.

Then, one night as I was building an addition to my tower, a text message appeared.

"You feel an evil presence watching you…"

Now, monsters are everywhere in Terraria. Normally, they're a nuisance—a slime here, a zombie there—but once certain criteria are met in-game, boss monsters start to appear. One such was the Eye of Cthulhu, as announced by the message I had received. The Eye is only the first, and easiest, of the several boss monsters in Terriaria, and higher tier items require the specialized loot that drops from these screen-filling foes. These bosses are not sophisticated in their attack methods, but with thousands of hit points, attacks almost impossible to avoid, and with their tendency to despawn the instant the player dies or accidentally teleports back home, slaying bosses in solo play can become more frustrating than fun, especially before a player has any higher level gear to offset the lack of other players.

Thankfully, there's a multiplayer mode that lets a player join up with his or her friends to smite evil, steal their stuff, and build brick houses to their hearts' content. The same character is used for single- and multiplayer modes, allowing for a true amassing of wealth for one's home. Tackling bosses becomes a lot more fun as well, and the brick wall doesn't feel quite as insurmountable as from the solo perspective.

The open-sandbox creation genre is still in its infancy, and Terraria

is a good, solid, and inexpensive entry. Players that have a strong drive to run around creating castles or treehouses while fending off hideous monsters from the depths of hell will find plenty to do in this world, and the developers are always coming up with new things to add via patches. However, people that like to have clear, pre-defined goals, storylines or that don't like methodical material-gathering sessions for construction may find themselves bored after only an hour or so and wondering what else they have to play. While my personal preference will always be for Minecraft, there's still a lot of fun to be had in Terraria, especially with friends. Rating: 8.0 out of 10.


Disclosures: This game was obtained via Steam download and reviewed on the PC. Approximately 18 hours of play were devoted to the single-player mode, and 2 hours of play were spent in multi-player. As this is a sandbox game, the game ends when the player wishes it to end.

Parents: At this time, the game has not been rated by the ESRB. This game does contain some violence and blood. Slain monsters collapse into chunky, pixalleted bits of body parts and blood. Also some of the monsters, particularly the bosses, can be quite fearsome in appearance. While there is no peaceful or creative mode that turns off monsters, an upcoming map editor might be the perfect mode for younger children. Older children should be fine if the parent deems it to be okay. Adolescents and higher should be fine.

Deaf & Hard of Hearing: The game is very open and accessible. There is no voice-acting, and all NPC dialogue is displayed in text boxes. In multiplayer, there is a chat window. Summoned bosses or other time-sensitive events are announced via a text message.