War. What is it Good for? Giant Walking Mecha. 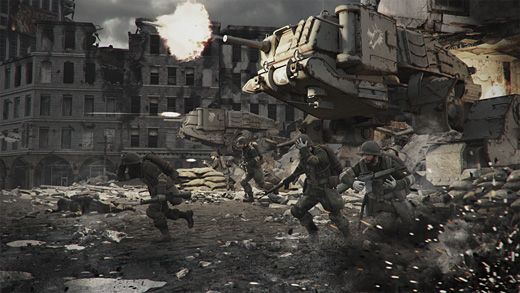 HIGH I managed to keep a crewmember alive for two consecutive missions. A personal best!

LOW Kinect-based quicktime events in a timed mission against a boss that can one-shot me.

WTF Twenty of my thirty crew members died by the halfway point of the game due to my incompetency. Why am I in charge of the platoon again?

is the fourth From Software title I've played in a year, and I'm starting to notice a pattern. Built on the same engine as Dark Souls and Armored Core V, some issues carry over that I couldn't ignore in Heavy Armor. First and foremost? Heavy Armor has an almost unrealistic expectation of its player's competency level. It's as though "easy" doesn't exist in From Software's vocabulary (it certainly doesn't exist as a selectable difficulty in this game), and the learning curve is made more brutal by the exacting gesture requirements of the Kinect.

Heavy Armor takes place in the year 2085. Apparently bacteria ate the Internet and all other modern tech, plunging the world back into the 1940s in terms of technology; communications have returned to a reliance on rare vacuum tubes, and the most sophisticated piece of equipment (apart from the walking mechs the player pilots) is a black and white television that displays static images. World War III ended with the Asian empire forming a new United Nations, conquering Europe, and invading the United States. As the mute vertical tank pilot Winfield Powers, players travel the globe, blowing up everything between him and the Asian empire's mysterious and deadly secret weapon.

Missions are presented in a standard war game style: a briefing goes over a general layout of the land, followed by deployment. Since a vertical tank (VT) is manned by a team of four, players are accompanied by three AI squadmates from a platoon of thirty that provide various functions. Powers drives, one soldier mans the radio and relays orders, and two ammo reloaders handle the left and right sides of the VT. The squadmates all have their own personalities, and the fact that they can die during a mission is supposed to foster camaraderie and a protective instinct. It's a great idea, but every time I failed to pull the ventilator switch and died of smoke inhalation while my right gunner stared at me with his empty, soulless eyes… Well, I'll admit that I may have been a bit vindictive when the game let me punch a squadmate in the face for his attempted desertion.

In terms of control, the VT itself is maneuvered by the Xbox controller, and all other actions such as looking around the cockpit and interacting with buttons and levers done via Kinect motions. It's an example of how much motion-based gaming has yet to achieve; where dictation and transcription can gradually learn the enunciation and handwriting of its user, the Kinect requires stubbornly robotic movements to detect a player's action with any precision. When the Kinect works, it performs well enough, but I never reached the point of physical fluency where I was able to perform an action without thinking about it like I would in a controller-only game. Many, many of my deaths occurred through the failing of the Kinect, or when it "creatively" interpreted my attempts to activate one function or another. 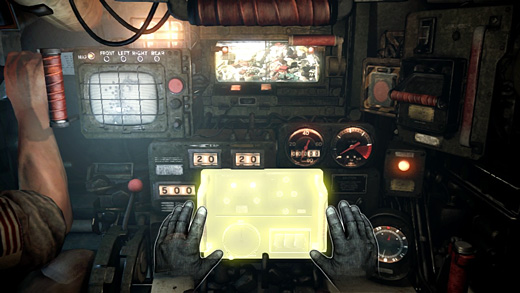 Perhaps my inability to achieve competency with the controls is part of why I quit Heavy Armor after only thirty hours. Certainly, my lack of skill didn't help with the surprisingly cheap gameplay I encountered. I'm used to From Software adding in bosses that can one-shot me before I even know what's going on, and Heavy Armor is no different in this regard. What I'm not used to is that there is so little ability to learn from my mistakes.

If I die in something like Dark Souls, it's because I mistimed a roll, attacked when I should have parried, or otherwise did something wrong. When I died in Heavy Armor, I was constantly at a loss as to what was happening. Was it the enemies that targeted me from across the map? Was it due to failing one of the many, many motion-based quick-time events that require a gesture and don't tell the player what that gesture is? Was there some mysterious method to successfully evade incoming fire that I hadn't discerned? Trial-and-error gameplay mixed with the eye-fatiguing brown sameness of the environments to form a medley of confusion that turned what could have been tense action into bitter sighs. The game's unhelpful death messages only topped off my growing ennui. Yes, Heavy Armor, I know I was killed by an armor-piercing shell to my left side. I was there. Could I be told instead where the shell originated from?

When not falling prey to mystery defeats, timed missions added another layer of frustration to my playthrough. Six minutes to achieve a specific percentage of a stage's goal is not a lot of time, especially with my VT constantly being shredded by the enemy and having to restart over and over. In theory, these missions are meant to be played co-op, but sitting around waiting for someone to show up and assist me just made me want to ditch my VT and play something other than this literal waiting game. The irony is that the timed missions are also ranked, and getting better ranks means earning new gear for the VT. My lack of skill meant I did poorly on the timed missions, which meant I earned no new gear, which meant I was constantly unprepared for later missions. It's a nasty effect that can quickly snowball to the point of halting progress outright.

My personal breaking point came when I ran up against an invincible boss who repeatedly killed me with one shot, no matter what I did, for three hours. That's right—three hours. Performing the same repetitive actions and sitting through unskippable comments from the other crewmembers turned my life into a five minute long Groundhog's Day loop, and out of weariness, I just set the game aside and moved on with my life. I don't play games to be griefed constantly by an opponent that I can't damage, and I don't appreciate success being determined not by my skill, but by how often said opponent decides to not target me with its instant death attack first.

YouTube provides evidence that some people are able to play the game and play it well, but I ended up deciding that Steel Battalion: Heavy Armor

was not the game for me. For what it's worth, if I wanted a simulation of being crammed into a tiny, metal, low-tech claustrophobic coffin while people yell and attempt to kill me repeatedly while I struggle with basic controls, then Heavy Armor offers up quite the war experience. However, that's not what I was looking for, and I suspect that it's not something anyone else is after, either. Rating: 6.0 out of 10.


Disclosures: This game was obtained via publisher and reviewed on the Xbox 360. Approximately 28 hours of play were devoted to the single-player mode, and the game was not completed. No time was spent in multiplayer modes.

Parents: According to the ESRB, this game contains blood and gore, intense violence, sexual themes,and strong language. This is a war game. The very first line of spoken dialogue is an f-bomb, and the profanity never dies down. Corpses, some horribly mutilated, are shown constantly, and some of the gear that can be earned is pinups of scantily clad women. This is not a game for children.

Deaf & Hard of Hearing: Subtitles for dialogue are enabled by default, and there is an onscreen indicator for the direction of damage. In addition, crewmembers that are alive will call out directions of incoming attack, when ammo has been successfully changed, and when a quicktime event needs to occur. The two points of possible difficulty are when using the periscope- the on-screen indicator for weapon readiness is no longer visible, and the only sign that a shell has been reloaded is through an audio cue. I found spamming the fire trigger to be an easy way to compensate- and the mine detector is sound-based. Crew members will not always call out that a mine is nearby until it has been stepped on.

This AngryJoe guy’s video mirrors exactly how I felt when I heard about the Kinect and how I felt after actually using it. It was like the Wii but better and I’d be in all these great games interacting in new and unique ways. Then I finally get the thing home and in one sitting I realize it is all just a lie. i tried have Child of Eden, Kinect Star Wars, UFC Personal Trainer and now Steel Battalion, each just seemed to be worse than the last. Microsoft is supposedly getting Kinect 2 ready, but I’ll probably wait until… Read more »

The barely saving grace was when the Kinect actually registered my commands- usually after I had played a stage a few times so I knew how I needed to move my body- the control scheme actually worked well and fluidly. It’s not a bad game; it’s just mediocre with a unique control concept that, when it works, it works pretty okay.

HI Kristin, I just have one question. You gave the game a 6.0 which is slightly above average, but reading your review, it doesn’t sound like you liked this game at all.

True, you played it for almost thirty hours, but they sound like a dreadful 28 hours. What exactly was the (barely) saving grace here?

I’m posting this review because it best demonstrates a playthrough of Steel Battalion: Heavy Armor. This reviewer, AngryJoe, started off all gung-ho to play the game. He apparently had been waiting forever for Heavy Armor to launch and believed in all that Kinect hype. Needless to say he was a little disappointed. The fun begins when he gets out of the tutorial section and starts to play the game only to watch it devolve into an unresponsive mess. It really is fun to watch.