Welcome Back to the Stage of History 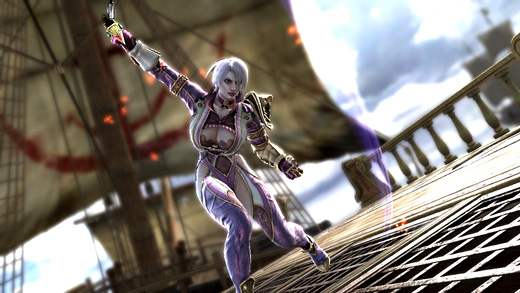 HIGH Getting curbstomped until I'm down to a sliver of health. My opponent's throw places him at the edge of the ring. I kick. Ring out!

LOW The AI blatantly cheating in the most infuriating ways possible.

WTF Ivy's the only person to speak with a European accent. Maybe she missed the memo that everyone was pretending to be American?

Soul Calibur was the reason I bought a Dreamcast and it was my favorite fighting game for a long time, solely because Sophitia reminded me of Sailor Venus from the Sailor Moon anime—Hey, I was 15 and obsessed over anything that even had a mild association to that show!

I fell out of love with it around the time of Soul Calibur III due to the growing trend of online play and lack of internet in my region. Now that Soul Calibur V

is out and I still count myself a fan of the Soul lore, I caught up on what I missed via the wiki and dove right into the Story Mode of V.

That is when the disappointment started.

Not only was Sophitia no longer a playable character (she died between IV and V) but I was stuck playing a whiny, arrogant, psychopathic manchild that not even the rest of the cast liked as a person. After a small sulk, I decided that instead of being annoyed, I would enjoy the narrative wreck that was presented. Fighting games aren't really known for their deep stories, so there was no point in getting upset that the plot is filled with holes, increasingly stupid actions on the part of the characters, and turns very predictable.

Unfortunately, Story Mode replaces the traditional single-player arcade mode from previous games that gave each character their own motivation and ending in order to focus on a single narrative. In Soul Calibur V, players follow the tale of Patroklos and Pyrrha, the children of Sophitia that have grown up in the seventeen years between IV and V. Confining the viewpoints to these two characters means there is no narrative for the rest of the cast—maybe everybody else had the flu and couldn't come in to Namco's studios that day? It's as likely a theory as any for omissions that go unexplained. 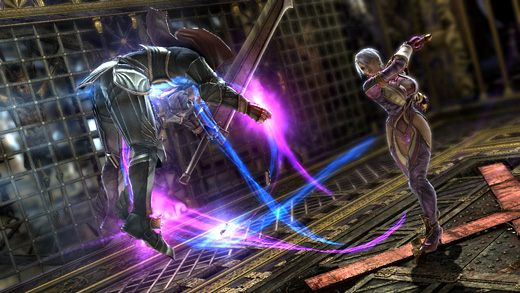 This thin mode plays out in a series of matches interspersed with cut-scenes that detail the plot. Some of these cut-scenes are fully rendered. Some are done in animation-free line drawings with voice-overs, as though the animators ran out of time to finish the rendering and decided to gussy up the storyboards and use those. This lack of coherency in style is best exemplified when a fight scene occurs between Patroklos and another character, and consists solely of fight sounds played over a slow pan of a static, sketched image. Every other non-interactive fight? Fully animated.

The rest of the Story Mode is just as haphazard.

Cassandra and much of the previous cast are absent with no reason given whatsoever, and what few familiar faces that do appear are cameos. Every person missing is then replaced with a substitute that fights exactly like the person they replaced—often without any explanation as to who they are or how they fit into the plot. It's almost the video game equivalent of the Mickey Mouse Club, where once an actor gets too old, they're shunted off for an identical, younger version of themselves.

Another issue with the single-player content? It's a good thing I used Sophitia as my main character in previous games, because players are stuck using characters that fight almost exactly like her for most of its duration. In a bizarre twist, the game then forced me to fight as a new character with his own unique style against late-game cheating bastard AI. Adding salt to the wound, the match had nothing to do with the narrative as a whole, so when I finally capitulated and dropped the difficulty so I could finish before I snapped my controller, the character I was forced to use vanished without warning, leaving yet another plot hole in a series of nonsensical choices.

While I appreciate the "effort" that was put into the Story Mode to make the tale semi-coherent, I missed the individual stories and endings. Without them, I felt little draw to experiment. In other fighting games I've played, seeing the endings for each character encouraged me to try the entire roster. This translated well into multiplayer, as I had a better grasp of each opponent and what they could do. There is an Arcade Mode in V, but I don't feel any particular urge to play it. The same went for Legendary Souls, the harder version of Arcade Mode that is eventually unlocked.

Of the other modes: Training is a decent place to practice and I liked the option to simulate button lag, but I wish that the timing of the inputs was shown when having the computer demo a move. It's hard to tell on attacks with delayed frames if my own inputs are too early or too late. For a newcomer, it's more or less like having a training dummy to practice the move list on, and little else. Actually learning the mechanics of the game and how to play it will have to come from playing for a while, or from external sources. 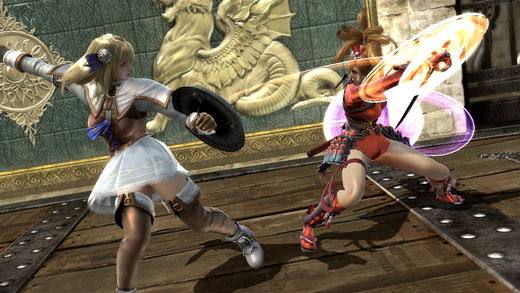 In the customizable Creation mode, I emulated several characters from the Metal Gear Solid series before I quit. I had to stop, else something like that that would consume my entire life. Sadly, the game would not let me assign Cassandra's fighting style to Patroklos—I really wanted to see him hurl himself butt—first at someone. Additional clothes and accessories are rewarded for gaining player levels, and the consistent stream of unlocks does make the mode feel like a rewarding compliment to the game overall. The more I played, the more options I had for my stable of fighters, and the more personal I could make my avatar.

The lack of the previous games' dedicated Challenge mode hurts, in that there's no way for a solo player to practice more advanced gameplay concepts unless they set their own self-imposed challenges which can't be reinforced by a computer setting.

As the first fighting game I've played online, I found the unranked casual lobby to be a godsend. Here, I could browse people's licenses (a breakdown of their statistics while playing Soul Calibur V), and view replays of other players' matches to see what the game looked like when the AI wasn't being a stinking hunk of cheddar.

Every so often a person would challenge me to a fight which I was free to accept or decline as I saw fit with no change to my ranking. If I really liked playing against someone, I could mark them as a rival and keep tabs on that person's rankings and skill alongside my own. It's a neat feature if I don't want to add random people to my friends list, and overall I could see myself spending quite a bit of time in multiplayer. While my own ISP issues hampered my ability to play for any significant lengths of time, the matches where my connection was stable played without any noticeable hitches or lag. In addition, all the players I encountered (barring one person who ditched the game as I was winning) were pleasant and friendly, and the text chat was filled with people congratulating each other and discussing strategies.

The Soul series has always been my favorite (apart from my love of Sophitia) because I don't need to memorize long combos and can do reasonably well without having to know every single frame of animation. Unfortunately for those returning after an absence (like me) or who are brand new to the series, Soul Calibur V

does little to bring a player up to speed with the new characters and mechanics beyond throwing them into the fight and letting them wade through as best they can. Factor in the scarcity of offline single-player content, and this means that multiplayer is the only thing granting Soul Calibur V any longevity; players looking for long-term offline play will be better served with Soul Calibur IV. Rating: 6.0 out of 10.

Parents: According to the ESRB, this game contains mild language, suggestive themes and violence. This is a fighting game where people beat the crap out of each other with weapons, and on-screen deaths occur frequently. The darker tone of the story mode is enough to keep the younger kids away. The teens should be alright.

Deaf & Hard of Hearing gamers: All dialogue is subtitled with the exception of mid-combat taunts. That said, there should be no barriers to play here.