Falling out of love 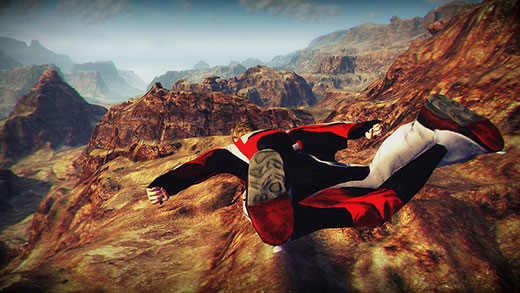 HIGH BASE jumping without the risk of breaking every bone in my body.

WTF So I guess Dracula just woke up one day and decided to go BASE jumping?

Skydive: Proximity Flight is the closest I will probably ever come to hurling myself off a cliff with only a wingsuit and a parachute to keep me from becoming a gooey paste on the craggy rocks below.

All told, virtual BASE jumping in Skydive: Proximity Flight (which is what the game actually simulates, as there are no leaps out of planes here) is about as thrilling as crossing the street against a red light—an easy task requiring little effort to complete.

From the high vantage of a clifftop platform or hot air balloon, the player selects one of a handful of avatars, each with their own stats (maneuverability, acceleration, weight, etc.) before pressing a button and watching them fling into the air like some giddy Icarus before promptly plummeting to the earth below.

The controls are simple in theory: tilt the controller to initiate dives, turns, and barrel rolls in the air. Unfortunately, actually doing these with motion controls is about as accurate as trying to throw a duck through a basketball hoop. I quickly enabled the analog sticks to stop myself from repeatedly bashing my avatar against rock walls at the slightest twitch of my hands. Also disabled was the repetitive electric guitar that serves as the musical accompaniment to the stages, preferring instead the ambient silence of the rushing wind.

A handful of modes provide a modicum of challenge, progression and variety.

Races against other players (or the AI) use a checkpoint system, and finishing first unlocks new races, of which there are only four total.

Eight trick challenges teach the trick system for scoring points, but they're all basic tricks, over in seconds, and offer no replayability.

Challenge mode has fifteen events, and presents the largest variety of gameplay by tasking the player with everything from scoring a specific number of points or performing a specific string of tricks, to managing to glide for a specific distance. This mode is also one of the most repetitive: twenty route challenges across various locales that all follow the same "Fly through X number of rings" format.

The last mode offered, Freestyle, is just that: choose one of the eight, real-world inspired locations, a time of day, set some goals, and freefall to your heart's content. Unique to the Freestyle mode is a HORSE-like element, where players can set up a course, play it, and then challenge their online friends to try and beat their score.

…And there's not much else to it here. It's very much a game for BASE jumping enthusiasts, as there's not enough variety or difficulty to satiate players looking for long-term replayability. Like its name vaguely suggests, Skydive: Proximity Flight doesn't quite hit its mark. Rating: 5 out of 10


Disclosures: This game was obtained via publisher and reviewed on the Playstation 3. Approximately 5 hours of play were devoted to the game, and the game was not completed. No time was spent in multi-player.

Parents: The ESRB has rated this game for Everyone, and it should be accessible to all ages.

Deaf & Hard of Hearing Players: The game is very accessible; everything is represented visually and via on-screen indiciators. There should be no barriers here.