Not the Type that Shatters Glass 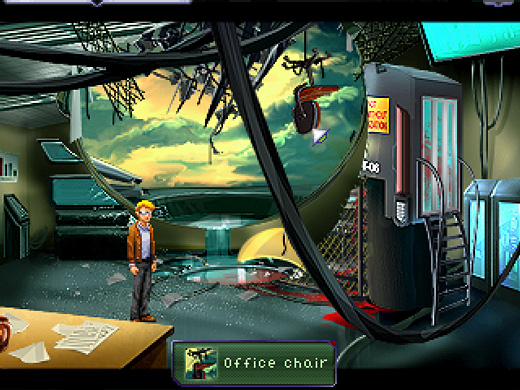 HIGH There are some rather tense and scary scenes to play through.

LOW Crashes to desktop whenever I skipped through dialogue too fast.

WTF How did the bad guy get out of a locked, sealed room? It's never explained.

The puzzles in adventure games are usually either amusing and clever, or mind-numbingly obtuse. I give Resonance credit for usually requiring logical solutions and for giving enough hints in order to arrive at an answer without a walkthrough. While things never reach the kind of absurdity where I'd be stuck trying to figure out how to make a mustache out of cat hair (Gabriel Knight) or trying to make a sentence where the only vowel is the letter "y" (7th Guest), the same respect isn't given to the plot.

Resonance is a point-and-click adventure with some similarities to the 1995 cult classic I Have No Mouth and I Must Scream in two ways; the dark setting of the story, and the way the player follows the intertwined plot of four individual characters. There's also a sort of bleakness that hangs over the storyline, reminding me constantly that a lot of people are probably going to die. This feeling is enforced as the game starts in medias res, opening with a news broadcast that shows various cities around the world suffering some sort of mysterious attack that gouges perfectly spherical holes out of buildings and leaves hundreds dead and injured, with no immediate explanation.

The events leading up to this global disaster are told though a series of flashbacks, wherein players take control and journey with the protagonists to discover why a lab exploded, a scientist was killed, how these events tie into the global attacks, and most importantly, what "resonance" is.

A unique mechanic introduced in Resonance is the memory system: key events in the plot are stored in the character's "long-term memory" (referred to as LTM). At any time the player can select an object from the environment and drag it into the character's "short-term memory" (STM). These memories can then be brought up in conversation when talking to others to open up new dialogue paths, or solve puzzles. It's a cute system and usually intuitive, but ultimately the STM is just another layer of inventory to manage. The result? The tedium of having to try every possible STM topic in a conversation the same way that I'd attempt to use every physical object in my possession during non-dialogue driven puzzles.

Speaking of the dialogue-based puzzles, they felt like they were the weakest part of the game. Whereas every physical puzzle was easy enough to figure out (even the harder puzzles were solved after a short mulling-over), some of the dialogue puzzles just didn't seem to have any logical methodology. 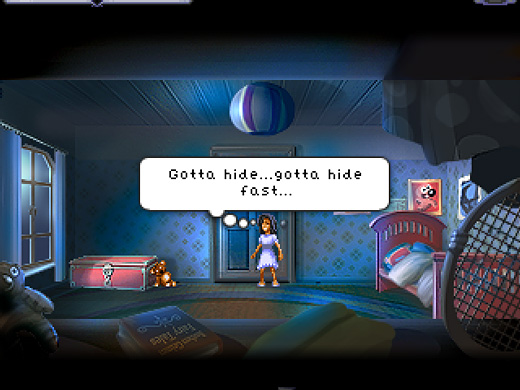 In one particular instance that stood out, I had to keep another character talking on the phone long enough for the call to be traced, with my only hints being that I should be aggressive, interrogative, and to keep the caller off-balance. I sank almost forty-five minutes listening to the same, unskippable dialogue (skipping too fast crashed the program) trying every option I could think of to keep the call going for as long as I could, only to discover (when I finally gave in and consulted a walkthrough) that the length of the actual call is completely unimportant. The solution involved the arbitrary selection of one dialogue option from one tree, another dialogue option from another tree, and that was it. The final conversation sequence actually turned out to be shorter than my own attempts to solve it.

Beyond this very visible event flag trigger was the fact that the Chekov's gun technique of foreshadowing was fully in effect throughout the whole game. I was given a map early on with lists of places to visit, all important in some way to the story. By the time of the phone call puzzle mentioned above, there was just one place I had yet to visit. Naturally, I was completely unsurprised that the character I had been tracking was there.

Much of the overall game is like this, in that there is nothing that is not telegraphed either by an item just being in a character's inventory (a smartphone that beeps when there's no signal? An actual gun?) or by being a memory or an unexplored location. This takes the surprise out of the plot, as foreseeing a few of the twists before they happened was quite easy.

The last third of the game is when the annoyances started adding up and I really started to cool off towards Resonance.

Beyond the phone call puzzle, the remaining challenges were almost too easy. Also, plot elements introduced early on (and dropped just as early) suddenly came back into focus with little plausibility, and with nothing other than a character's say-so to make me believe the elements were supposed to matter to the plot. There's an audible downgrade in one character's voiced lines that makes it sound like the actor's a bit too close to his microphone. The game crashed several times, and the ending… I know the intention was for a grey morality ending where there is no right answer, but when both options involve the characters acting differently from the way they've been portrayed until then and ignoring what I thought were fairly obvious third and fourth solutions, I couldn't view either ending with anything other than skepticism.

On the whole, Resonance is serviceable entry in a genre where very few games are being made. The plot's not stellar, but it's still pretty good. The animation was fluid, and some of the scenes are quite gorgeous. The music also does a good job of setting the mood for the various locales and situations. Despite how harsh I might be, it's solid enough for being a ten dollar indie title and I do recommend checking it out for adventure fans. Rating: 6.0 out of 10.


Disclosures: This game was obtained via publisher and reviewed on the PC. Approximately 10 hours of play were devoted to the single-player mode, and the game was completed twice.

Parents: This game has not been rated by the ESRB, however there is some on-screen animated violence and death as well as strong language. There is a large amount of strong language in the developer's commentary as well. While the puzzles might be solvable by teens, due to the strong language, the themes of terrorism, and the violence, this game would probably be for the adults.

Deaf & Hard of Hearing: Dialogue is subtitled, with the exception of developer's commentary. The one sound-based puzzle also has an on-screen indicator. There should be no problems.

Glad someone played this! I was curious and kindof hopeful it might rise above the goofy puzzle mechanic rule- oh, well!
Great review! Thanks!