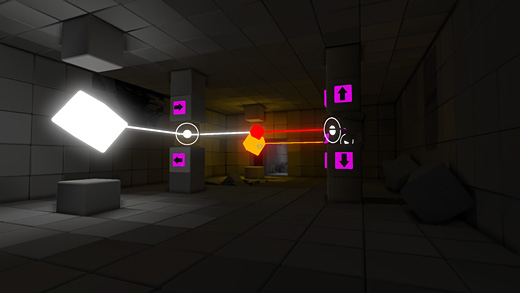 HIGH Being stumped on a puzzle until that eureka/euphoria moment hits.

LOW Laser puzzles that show up out of nowhere, and just as swiftly vanish.

If gaming as a whole were a series of dinner courses, then Q.U.B.E. (Quick Understanding of Block Extrusion) would be the equivalent of an appetizer eaten as a lunch-there's enough content to make me feel like I'm playing a full game, but I just know I'll be craving something later on.

Like the game it most obviously draws its inspiration from (Portal), Q.U.B.E. is a first-person puzzler. Players take on the role of an anonymous pair of floating white gloves (no hint is given to the protagonist's gender, race, or even humanity) and silently solve a series of spatial sticklers via the manipulation of colored blocks that litter each chamber. Puzzles themselves are grouped into over-arching collections of sectors, with each sector having its own theme and allowing the game to build difficulty by utilizing lessons learned in previous sectors.

Q.U.B.E.'s clean and minimalist color palate allows the player to swiftly grasp the core concept of each area. Against the stark white background, the blocks that can be manipulated pop out, drawing the eye and helping to teach navigation without having to resort to obnoxious or unnecessary tutorials. But, it's the way that Q.U.B.E. is willing to play with these concepts that's interesting. After several standard "get to the exit" puzzles, being faced with the need to create an obstacle course for an object like a sphere or block was a welcome change from what could have otherwise been a stale experience. Another favorite sector asked me to operate in near-absolute darkness, guided only by the glow of my blocks.

However, not all of Q.U.B.E.'s concepts tie together well. While most puzzles build upon each other, whether via basic block manipulation or pseudo-sliding puzzles with magnets that defy gravity, one sector stands out as oddly out of place: an area dedicated to a variation of the prevalent light and mirror puzzle. This familiar friend requires the player to turn lenses to create a path for a laser, or to change its color to match a particular block. As this type of puzzle exists only in this sector (and it's so much easier compared to the other rooms) it gave me the impression of being needless filler, added to extend a short game by another fifteen minutes.

There are a few bugs in Q.U.B.E., but none of the game-breaking variety. Being built on the Unreal engine, texture pop-in when a stage is loaded is as common as it is in other games with the engine. Also, the green blocks I needed to move around would occasionally plummet straight through the floor upon spawning, though a handily-provided reset button fixed it.

For the price (currently available for $15 on Steam) Q.U.B.E. is a decent way to spend a few hours. I found it a welcome change from the glut of open-world RPGs that have seemed to come out month after month recently, and I would happily buy DLC for additional puzzle packs if they became available. The short length of the campaign left me wanting more later on, but as a palate cleanser between meatier affairs, it hit just the right spot. Rating: 7.0 out of 10.


Disclosures: This game was obtained via Steam download and reviewed on the PC. Approximately 4 hours of play were devoted to the single-player mode, and the game was completed once. There are no multiplayer modes.

Parents: Currently, this game has not been rated by the ESRB. This a puzzle game with no interaction with anyone other than the player, some cubes, and a few Michael Bay-esque explosions. Young children may have difficulty with some of the reaction-based puzzles, but overall there's nothing here to cause alarm. I wouldn't have a problem letting my nephew play.

Deaf & Hard of Hearing: There is no dialogue and no puzzles are sound-based. There are no barriers here.