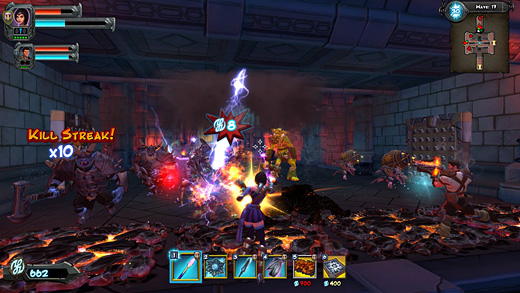 HIGH Watching orcs get launched into the abyss/lava/acid/void traps never fails to bring a smile to my face.

LOW Attempting a perfect run, only to have orcs repeatedly slip past when I'm busy elsewhere.

WTF The Sorceress's "clothes" might as well be made of dental floss.

Orcs Must Die! 2 is the sequel to last year's game of the same name—a third-person real-time title I picked up on Steam at random, and found myself enjoying quite a bit more than I expected.

The plot is simple: the hero from the previous adventure successfully defeated the evil Sorceress and her orcs, and retired to life as a simple miner. He thinks he's got it made until a new rift opens to allow the evil green guys to invade once more. At this point, it's up to the player (now joined by the Sorceress) to blow up, burn, electrocute, polymorph, melt, mind-control, and… well, you get the idea. Orcs must die, and there are dozens of ways to help them meet their ends.

Orcs Must Die! 2 is an easy game to jump into, even for newcomers. After selecting to play as either the War Mage or the Sorceress (each of whom have their own stats, weapons, trinkets, and traps, though there is some overlap) players select a stage, a difficulty, and head right into the killing fields.

Strategy is key here. Waves of enemies will flood out from entry rifts, traveling their preset courses towards an exit rift. To stop them, it's up to the player to lay traps along the orcs' path with the goal of killing as many as possible. Survive all waves without too many orcs escaping, and the stage ends in victory.

Doing well rewards the player with skulls. These skulls can be used to upgrade equipment and buy new destructive toys to play with. Compared to its predecessor, there are quite a few and very welcome changes to the Orcs Must Die! formula.

The largest, most obvious addition is co-op: two friends can take on the hordes together, mixing and matching traps and trinkets to best maximize the body count. In many of the latter levels, orcs are spilling out from rifts all over the maps, and having a partner to physically cover the areas I wasn't able to was a godsend when aiming for perfect runs. (Those without mics should take note—chat is disabled during play, so any typed discussion of strategy will have to be done prior to starting a level.) 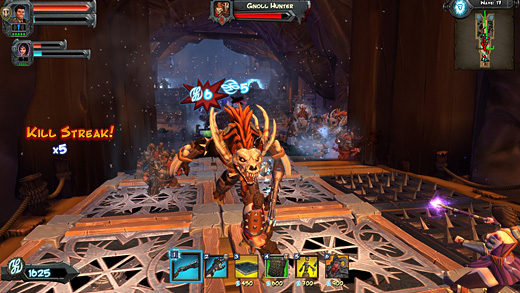 In addition to the co-op, there's a host of new traps to purchase. My new favorite is "The Haymaker," a ceiling trap that basically turns hallways into blenders. Gone are the passive buff-giving Weavers, replaced by a host of trinkets that serve similar purposes (such as reducing the trap cooldown timer), but at the cost of taking up a precious quickbar slot that could otherwise be another sort of trap to lay down.

Other changes include free “re-specs” between levels, traps that can now be placed on inclines and other diagonals, a variety of grueling Endless mode levels, and for owners of the original Orcs Must Die!, ten levels from the first game playable with all the new bells, whistles, and co-op added in.

However, even with all of the new additions, there's still room for improvement. For example, neither myself nor my partner could figure out portions of the post-level stats breakdown screen. Exactly what did I do 49% of? Damage? Kills? I did 49% of something.

I would also love some sort of replay capability, to help me figure out exactly where enemies are slipping past me on frantic stages, and it would be nice if clothes and vanity items were a one-time purchase, rather than having to rebuy them every time I “re-spec'd my loadouts.”

These quibbles are minor, and didn't significantly detract from my enjoyment of the game. However, a huge, glaring flaw is that there are no subtitles and no on-screen indications for when specific types of monsters appear that are otherwise announced via sound cue. This omission makes an already difficult game that much harder for those that rely on visuals.

Missing subs aside, the amount of content in Orcs Must Die! 2 is exceptional, and that it's such an improvement over its predecessor speaks well of its developers. The fact that it's just $15 is just icing on a delicious orc-filled cake. Whether played solo or tackled with a friend, those looking for a fast-paced, third-person tower defense will find that the unique traps and reaching for high scores will more than keep them occupied.


Disclosures: This game was obtained via publisher and reviewed on the PC. Approximately 19 hours of play were devoted to play, 9 of which was spent co-op, and the game was completed once.

Parents: Currently, this game has not been rated by the ESRB. However its predecessor was rated Teen, and this game is highly similar when it comes to cartoony depictions of orcs being killed in a variety of ways, including but not limited to being reduced to skeletons, total dismemberment, and charred to a crisp. Options exist to disable both gore and dismemberments. In terms of suggestive content, the playable Sorceress  shows a ridiculous amount of skin for someone in a life or death situation.

Deaf & Hard of Hearing: While a mini-map is present that shows enemy and ally positions, there are no on-screen indicators when a special monster enters the field or when a bonus skull drops, both of which have audio-only cues. There are no subtitles for dialogue. The game is playable, but it is much harder to make a perfect run without rote memorization of the stage and its waves.