When Easy is Too Hard 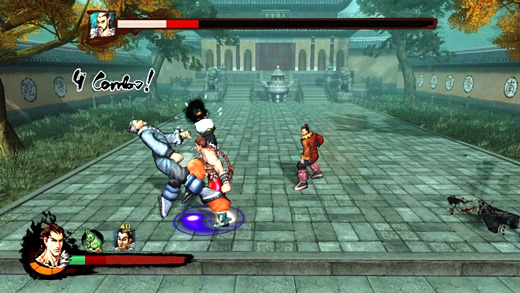 HIGH Finally beating the game after a solid hour of continuous failure.

WTF The last boss comes out of nowhere, plot-wise.

Very few games actually make me want to take my console or computer and chuck it out a window in sheer fury. Kung Fu Strike: The Warrior's Rise

not only pushed me to that point , but did with regularity. The game's Steam page may sound like it's boasting when it claims that the game proves a challenge even on Easy, but it's not. Kung Fu Strike is hard: unrelentingly, unremittingly, and unforgivingly hard.

Playing as General Loh, alone or with a friend, players fight their way through twenty-eight levels of pure action against increasingly difficult foes and circumstances. Controls are deceptively simple; when the attack button is held down, Loh continuously strikes in the direction the player points. There's also a button to counter incoming attacks, creating a brief window to land a blow and start a new attack chain. Jumping, evading, summoning allies, and a special attack round out the rest of the abilities.

Since enemies have the same capabilities, combat tends to flow in a complicated dance of attacks, counter-attacks, and flashy moves reminiscent of a choreographed martial arts film. The celshaded, fluid art and animation definitely give the game some pretty eye candy.

It's a good thing the controls are so responsive and the game is nice on the eyes, because the AI and level design are brutal. The developers' favorite tactic seems to be forcing Loh against multiple enemies at once, but without any of the anti-frustration tricks old-school brawlers like Streets of Rage implemented. In other words, there is no hit invincibility (successive strikes from different opponents can and will cause full damage), no invincibility when evading, and when resurrected mid-battle, there's no enemy pushback, knockdown, or any other other automatic way for Loh to gain room to regroup. The AI will happily surround him and beat Loh to death the instant he respawns if the player isn't quick enough—and that's with regular mooks.

Special boss characters are just as bad with their ability to stand just a step beyond Loh's range and whip out special move after special move. If you can survive that, the game starts throwing in more than one boss at a time. The final boss is the logical endpoint of this non-stop escalation of difficulty: He whips out instant, almost unblockable special attacks whenever a player steps into the wrong area, in addition to filling the screen with shuriken and being constantly reinforced by supporting enemies. Rubbing salt in the wound? It's a multi-stage fight that makes the player start at the beginning if they die.

I derived a grim sort of pleasure from finally wresting victory from Kung Fu Strike's unrelenting grasp, but I only persevered because of how well the game is crafted. Level loading is almost non-existent, the controls are responsive, the framerate is smooth and steady, and the graphics are sharp. Such things are critical in a game with such unforgiving difficulty. Special mention goes also to the interstitial cut-scenes, with a style resembling paint strokes.

Aesthetics aside, there's a certain level of patience and stubborn belligerence that will probably be needed to best Kung Fu Strike: The Warrior's Rise

, even on Easy difficulty. The target audience, those that love old school brawlers, would probably be happiest here, but the sharp difficulty will certainly turn off anyone looking for a casual affair. Rating: 5.5 out of 10.


Disclosures: This game was obtained via Steam download and reviewed on the PC. Approximately five hours of play were devoted to the single-player mode and the game was completed once. No time was spent in multiplayer.

Parents: According to the ESRB, this game contains animated blood and violence. This is a fighting game where protagonist fights many, many cartoon enemies with stylized martial arts. It's no worse than other similar brawlers like Viewtiful Joe.

Deaf & Hard of Hearing: All dialogue is presented via on-screen text. The game is completely accessible.