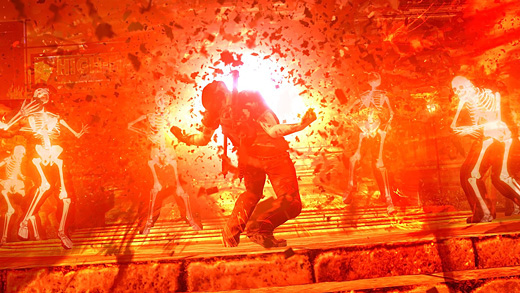 I really wanted to love inFamous 2

, and indeed a part of me does love it.  I have long been enamored with superheroes (especially those with electricity-based powers) so the purchase and play of the two games starring charged-up bike courier Cole McGrath was a no-brainer for me.  For the most part, both installments delivered exactly what I hoped for: an open-ended environment within which I leap across digital rooftops and shock the mess out of bad guys to my heart's content.

However,  somewhere around the halfway point of inFamous 2,  the shiny polish of Cole's new powers began to wear off, and I started to realize I was playing a slightly re-arranged, slightly more polished copy of inFamous. After that sank in, I stopped doing side-missions,  stopped hunting for blast shards to increase Cole's energy supply, and  just started plowing through story missions in an attempt to see the ending. I'd go back later, I told myself, to work on those trophies and the Evil ending.

…As of this writing, I have yet to touch inFamous 2 again.

inFamous 2, despite engendering the same feeling of visceral joy as its predecessor, never seems to get any deeper or more profound than a summertime treat bought from an ice cream truck; I enjoyed it, but after consumption, I threw out the wrapper and went to see what else I had to snack on. Honestly, I suspect my initial appreciation of the game was some sort of rote reaction or conditioned response. I like superheroes,  inFamous 2 is superhero game, ergo… I like inFamous 2. This formulaic love was just as shallow and short-lived as it implies.

inFamous 2 doesn't really do anything wrong, though, and hits many of the points that made the first game such a pleasant romp. For example, the general flow remains similar to other titles in the genre—while traveling around an open-sandbox world, the player starts missions by approaching a glowing marker of a particular color: white for the main storyline, yellow for side missions, and green for user-generated content. (User-generated sections are custom missions that other players can play and rate from a pre-set, yet extensive list of options. It's relatively easy to generate a quick "Defeat all enemies" scenario, or set up some rings for a checkpoint race, and an active community forum can provide help for more complex ideas.) 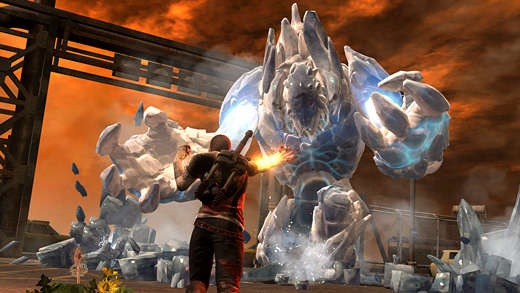 Keeping in line with the original inFamous's Karma system, there's also an occasional Good side/Evil side mission that, upon completion, will lock out the mission of the opposing alignment, and Cole's expanded powers are all great to play with. Each "Blast Core" Cole activates gives him a new electric-based power to replace the ones he loses at the start of the game, such as reinstating his electric sniper rifle or his electrical rockets. On top of his original electricity, Cole also gets a choice between adding ice or fire powers to his arsenal.

(A side note: my love goes out to whoever designed the Lightning Hook. It is ridiculously great yanking an enemy off a rooftop or ripping them off the street to go flying through the air. It's too bad that this power is so far relegated to pre-order DLC, though.)

While the game's positives are largely similar to those of the first game, the cons are as well.

To start with, there's a fair amount of assets obviously recycled from inFamous, notably Cole's idle animation, the karma and energy meters, and giant cranes the player has to scale. Such things aren't noticeable, though, unless one is paying attention and looking for them.

A trademark of the game is having Cole traverse the city by rooftop jumping and powerline skating. They are visceral pleasures that I will never get tired of—Cole really gets around, and climbing buildings is made swifter by the addition of vertical cables that rocket him up in seconds.  However, heaven help the player that actually wants to jump onto a vertical power line. Jumping directly towards one will cause Cole to float over and attach himself to any nearby outcropping in furious defiance of all logic.

The game also feels as though it has more glitches than inFamous. For example, Cole will often phase through solid objects, and there were several times when the camera stubbornly refused to cooperate in hectic firefights by pointing straight down and spinning in rapid circles. Vehicular escort missions are just as much of a pain to complete as they were in the first game, and if the Good ending is the canon ending, well… Let's just say that it's going to be interesting to see how Sucker Punch writes their way out of that dilemma. It's not a bad ending, per se, it's just very… definite.

If a player liked inFamous, it's likely that they'll feel the same about inFamous 2

(like I did) but they shouldn't expect long-lasting appeal.  Those who didn't like the repetitive missions of the first or who want a story more interesting than "Super-powered Guy spends several in-game days fetching objects to power another object" won't be likely be won over by the addition of more quests, similar missions or the occasional buggy gameplay of inFamous 2. Rating: 7.0 out of 10.


Disclosures: This game was obtained via retail store and reviewed on the PS3. Approximately 25 hours of play were devoted to the single-player mode, and the game was completed. There are no multiplayer modes.

Parents: According to the ESRB, this game contains blood, drug reference, language, sexual themes, use of alcohol, and violence. The violence should be a given as Cole—Good or Evil—will kill many, many people before the game is over, but the remaining content is nothing worse than a prime-time television show. If you would let your teen watch any other modern superhero movie, they can probably play inFamous 2 just fine.

Deaf & Hard of Hearing gamers: Subtitles can be enabled, and almost all dialogue is subtitled, with the exceptions being the in-game television broadcasts and the random chatter of civilians and most enemies. There are also on-screen visual indicators for low health, and the direction of off-screen attackers and thrown grenades, as well as a mini-map that displays the location of all enemies relative to the player. The game is very accessible.