They're Only in it for the Gold 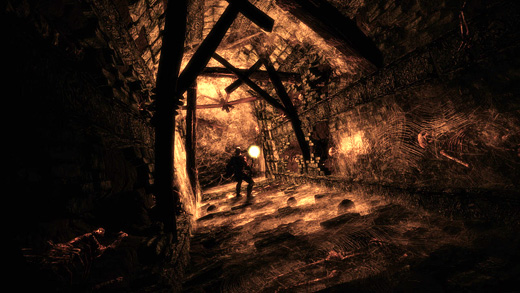 HIGH Setting up a combo attack with my partner that obliterates crowds of enemies.

WTF Deleting my clear file re-locks the unlockable content even though the Achievement shows I've already beaten the game?

For a while, I didn't know what to think about Hunted: The Demon's Forge

I enjoyed it. I was amused by it. I was frustrated with it. Then I finished the single-player campaign, and by some stroke of ill luck, I deleted my clear game file. That error rendered fourteen hours of progress extinct in a puff of digital smoke. Strangely, as I stared at the pristine spot where my upgraded character had once been, I didn't feel anger. Instead, I just started to laugh softly. Accidentally wiping my save file and being left with no choice but to start over if I wanted all the unlockables seemed like the perfect, elegant end to this game.

It has been mentioned that Hunted is a fantasy version of Gears of War, but I don't think that's completely accurate. Gears is a third-person shooter, but one character in Hunted (Caddoc) is very much melee. Having him hang back and taking cover behind a chest-high wall so he can shoot opponents with his crossbow feels wrong. Except for two puzzle segments where I played as the elven archer E'lara, I went through the entire adventure as Caddoc. It was there, as I rushed towards enemies and beat them all to death with his giant glowing axe, that I realized that the melee experience is nothing less than a spiritual successor to the arcade classic, Dungeons & Dragons: The Tower of Doom. You can't get much more old school, hack-and-slash than that.

Hunted feels like a solid re-imagining of what a quarter-muncher from days gone by would be like today: short, steady bursts of progression with swift combat and levels designed to funnel towards the end with an appropriate set-piece boss fight that closes out the chapter. Each character even has three "lives" before death kicks the player back to the last checkpoint.

Equipping weapons? It's a simple matter of checking which has the larger number. The story doesn't try and rise above its "Here's why you're killing stuff, now go over there" premise. Rinse and repeat until the credits roll. The only things the game seems to be missing are a giant glowing arrow that flashes when the area's clear, urging progress towards the next destination, and a poorly-translated "CONGRURATIONS A WINNER IS YOU" screen featuring the protagonists posing after the credits roll. 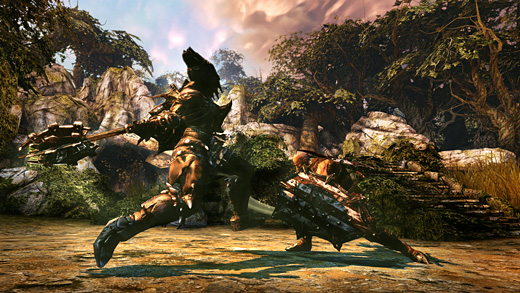 The arcade nostalgia that Hunted engendered within me means that I took an issue with, of all things, the sidequests and the length they added.

Do I explore or do I keep going? If I explore I'll get new weapons, but as the potent attack enchantments are temporary, then they may not be worth it. To spend half an hour solving a puzzle for a weapon that will have twenty-five or so charges before becoming weaker than a regular sword started to lose its appeal. By the end of Chapter 4, I found myself actually growing a little tired of the exploration, and it seems inXile predicted player fatigue as well. By Chapter 5, the sidequests and riddles became mostly nonexistent, the chapters grew shorter, and the game began to barrel towards its end before I thought about quitting. I appreciate a game that starts to realize that it's wearing out its welcome and just gets on with it.

I also appreciate the AI. While no substitute for an actual person, the computer's control of E'lara was serviceable. Only on occasion did I become annoyed with my companion, usually when E'lara's pathfinding took her out of the combat, and the rare moment where I, as E'lara, was dropped repeatedly to my death by an AI Caddoc that would move off a switch holding my bridge up over a spiked pit.

On the other hand, such irritations can be avoided entirely by recruiting a friend along for the adventure. Like many other similar titles, the level of enjoyment to be had was much greater when each character was controlled by a living, breathing person over Xbox Live. The characters are well-written relative to the amount of time that's devoted to the story and their easy, familiar banter feels natural, so it seems only appropriate that the best way to enjoy Hunted is with a real partner. If the option to buddy-up is available, it's certainly recommended.

feels rough and lacking refinement in almost every aspect of the game, but honestly, if I hadn't deleted my clear file I'd probably be replaying it again as E'lara on the hardest difficulty. It's a good, solid, fun romp that doesn't take itself seriously, which makes it a great title when the player just wants to jump into something for a few hours at a time. In fact, maybe that's why I don't feel too bad that I wiped my save file—players always have to start from scratch after they've got their money's worth in the arcade. Rating: 7.0 out of 10.

Parents: According to the ESRB, this game contains blood, gore, and violence. Caddoc and E'lara run around covered in the blood of their enemies, and Caddoc can do some brutal executions that send heads flying. There's also some mild swearing. This M rating is appropriate, so kids should stay away.

Deaf & Hard of Hearing: All important dialogue is subtitled, including the cries from prisoners that can be rescued. However, be aware that prisoner subtitles override story dialogue, which can lead to some of the Caddoc/E'lara dialogue being lost (the Chapter 3 opening cut-scene is a notable instance). It's also worth noting that the game does include off-screen attack indicators to signal unseen aggressors. In general, the game is quite friendly and accessible