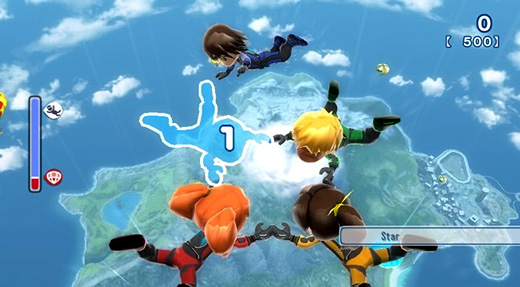 LOW The balance board makes games harder to control without making them more fun.

WTF Why can't I swordfight without Motion Plus?

Sometimes, I wonder what the marketing pitch for Go Vacation

Developer: Hey, we want to make a mini-game collection for the Wii, based on four different types of vacation resorts.

Developer: So we want to go to these resorts and spend at least two weeks "researching" the activities available, and we want you to pay for those two weeks of "research."

Publisher: This isn't a shameless ploy to get a two-week paid vacation, is it?

Publisher: Eh. It'll be a good game for the family crowd. Go for it.

…And now you know my imaginary backstory for Namco-Bandai's family-friendly title, Go Vacation.

Go Vacation was a much-needed break from my usual difficulty-laden preferences. I sat down, not expecting anything particularly deep, but I was pleasantly surprised to find myself actually enjoying myself from start to finish.

After registering my Mii—players have a choice between a pre-made avatar or their Mii—I settled down with a nice cup of cherry cider, some 80s music, and proceeded to pretend for several hours that it was not a cold and windy night in Chicago. 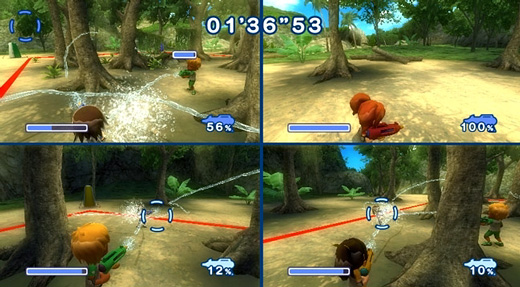 Each resort has its own theme and associated mini-games. The Marine Resort is a sandy island filled with sun, waves, and ancient ruins nestled within a rainforest, where I gleefully (but not maliciously, I swear) spiked a ball into my opponent's face during beach volleyball. The City Resort is one part industrial neon high-rise, one part massive skate park where I maliciously (and gleefully) trounced my opponents in air hockey. The Snow Resort got revenge with its snowball fights, and the Mountain Resort's tennis didn't thrill me, but made up for it by having a dude ranch where I could yell "Pull!" at my television and blast clay pigeons out of the sky.

These resorts can be traversed open-world style on foot, or by utilizing various gear appropriate to each area; roller-blades, skis, horseback, or ATV. In addition to being the main method of reaching various activities, exploring the grounds allows players to complete secret challenges and hunt down treasure chests to unlock new outfits.

Games can be played in any order the player likes, either by traveling to their location directly or from the main menu. For those liking a bit more direction, a tour guide named Lily will suggest games to try in a specific order. Successfully clearing the game recommended by Lily earns a stamp. Getting stamps unlocks new resorts, times of day to explore, and other things… like an entire house. If only real home ownership was as easily obtained from a game of Whack-A-Mole.

Almost every game can be played with either the Wii remote, or in conjunction with whatever peripherals a person might have. Personally, I ditched my balance board quickly since it just made things unnecessarily complicated while adding nothing to my enjoyment. There's also a hassle associated with playing  "musical chairs" with peripherals, as many games require taking off a peripheral to play, then reconnecting the peripheral when I was done. When some games last around five seconds, that can become tedious.

I'm always on the lookout for family-oriented games I can recommend to my sister and her husband and son, and I would recommend Go Vacation

in a heartbeat—it's a title that utilizes every first-party peripheral a family might have gathered, the games are easy enough for younger children (with assistance) while still being entertaining for adults, and each Resort is vibrant and colorful, with lots of nooks, crannies and genuinely beautiful spots that made me wish I had a "take a screenshot option" for anywhere in the game. Perhaps best of all? None of the games feel like they've been shoe-horned in for the sake of being included; they're all entertaining and control well.

It may not have real sand, real snow or an open bar, but any vacation where I don't have to spend my entire flight listening to a crying baby is always a plus in my book. Rating: 8.0 out of 10.


Disclosures: This game was obtained via publisher and reviewed on the Wii. Approximately 8 hours of play were devoted to the single-player mode, and the game was completed. No time was spent in multiplayer modes.

Parents: According to the ESRB, this game contains cartoon violence. While this isn't Grand Theft Auto by any means, I did have the unfortunate tendency to ram my vehicles into the random passersby before I got the hang of controlling my vehicles—which didn't seem to inconvenience anyone but me as I came to a crunching halt after each hit. Also there are several gun-related activities. Given the cartoony-nature of the art style, I wouldn't have any trouble giving this game to my 8-year-old nephew.

Deaf & Hard of Hearing: All in-game dialogue is subtitled, with the exception of background music and the occasional voice sound byte, none of which is required for playing the game. There are on-screen indicators for player positions in multiplayer games. There should be no problems completing this title.

And they say there aren’t any good games on the Wii. Seriously, this one is going to be under the Christmas tree right next to Skyward Sword. Just those two games, but 2 games are better than nothing.