Awkward Laughter in My Pocket 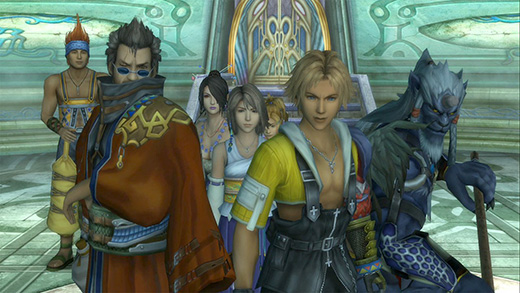 WTF The new quick recovery feature pauses the game everywhere except the Thunder Plains in FFX.

, I was unburdened by fond recollections because I rage-quit both games. I stopped FFX because I couldn't deal the required amount of damage to a boss and had no earlier saves, and FFX-2 was chucked after I reached Chapter 3 and realized that I had already ruined my chances of 100% completion.

After having these burnouts back in the day, believe me when I say that I had no rose-tinted memories. It was easy to take a good, hard look at these reissues, and the final verdict was a solid one—both games are still enjoyable, and hold up well in the current generation.

Based upon the International versions (previously unreleased in North America), the HD remakes of FFX and FFX-2 have been updated with cleaner graphics, new character models, widescreen support, new music, and extra gameplay content. An included movie bridges the narrative gap between the two games, and a third, smaller game called FFX-2 Last Mission (played as a roguelike dungeon crawler) serves as an epilogue for the series.

The biggest change is, of course, the graphics. The games look and play beautifully on the Vita, and take full advantage of the crisp screen resolution, allowing for vibrant environments and improved levels of detail. The new character models are nice, particularly with regard to faces and eyes. The enhancements here allow the characters to emote to a greater degree, and I found myself noticing smaller moments such as Tidus side-eyeing Wakka, or Rikku's anxious horror when the truth about summoners comes out. Clothing flaps as if there's wind or other appropriate weather effects, and Yuna's summons look fantastic.

However, these upgrades have only been done to the main cast of the two games, leaving the rest of the NPCs with cleaned up textures, but the same flat gazes and clothing that looks painted-on. It can be quite jarring to see Tidus and Yuna talking to individuals that still look like they call the Playstation 2 home. Even more jarring, FFX-2 is inconsistent with its new models, and whole cut-scenes flip-flop between the new versions and the older, less detailed models. It doesn't occur often, but it's very noticeable when it happens.

Beyond the graphics, the music has also been reworked, with a large portion replaced with updated tracks made specifically to take advantage of newer technology. Preferences will vary, but I found FFX's new tracks to be functional, while FFX-2's upbeat j-pop synth was forgettable and annoying. The voice acting sounds the same between the two games; Yuna's actress is still stilted and awkward in FFX but more fluid in FFX-2, a sign of the actress no longer attempting to match the tempo of Yuna's mouth movements.

The new bonus content fits into the package well, but isn't mandatory for enjoyment of either title. For instance, the Expert Sphere Grid in FFX allows for greater optimization of team members, but gameplay remains the same. The new dresspheres in FFX-2 are entertaining, but aren't powerful enough to replace or supplant other available spheres. The Last Mission bonus dungeon feels like it was ripped straight from a PS One game thanks to its generic music, bland and repetitive dungeon environments, and an archaic interface that makes players click through two or three menus even for simple actions like healing. Heads up—both Last Mission and the Eternal Calm movie are available right from the start and blatantly spoil the plots of the games, so new players should hold off on accessing these bonus features if they've never finished FFX or FFX-2.

As summer rolls around, playing Vita releases while parked in front of an air conditioner is a welcome relief from rising temperatures, and FFX/FFX-2 HD

are a worthwhile investments for newcomers and returning players alike. It's easy to recommend this compilation to anyone looking for JRPG gaming on the go, and this pair of games is poised to steal my free time all over again—and I'm perfectly willing to let it. Rating: 8 out of 10

Parents: According to the ESRB, these games contain: mild blood, mild language, suggestive themes, and violence. While both games are visually light on gore, some of the outfits worn by several female characters show a fair amount of skin. Both games also deal heavily with the themes of death, racism, and genocide, which is something parents will have to determine if their children are mature enough to deal with.

Deaf & Hard of Hearing: Both games are completely accessible. All spoken dialogue save non-essential combat chatter is subtitled by default.