Not inspired by Dark Souls or Roguelikes 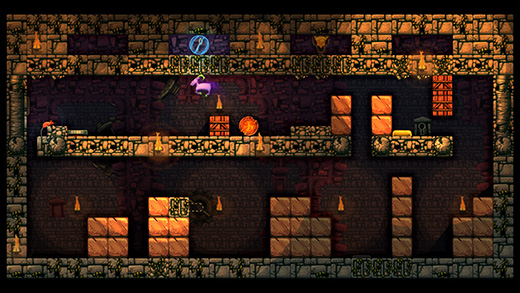 WTF Die enough times in a room, and the "Quit" option turns into "Rage Quit"

Escape Goat 2's premise is simple: a bunch of sheep have wandered inside a big, evil tower, and it's the goat's task (with aid from a magical mouse) to solve its puzzle-filled rooms and free their souls. What's less simple is actually doing it—this journey is made perilous by fire-flinging, scythe-wielding figures patrolling the floors, bottomless pits, exploding crates, and whirling buzzsaws. Over 100 brain-busting rooms await the goat, and each one promises to challenge brains and thumbs.

Stages start simply, with easily-solved jumping puzzles and rooms that require the right order of buttons to be pushed before opening the exit. However, as each new wing of the tower is unlocked, additional curveballs are thrown into the mix. One-way doors can halt progress in an instant if entered at the wrong time. Wooden walkways catch fire and burn up, forcing the player to hasten their steps or fall to their death. Much later, a giant bone serpent that chews through blocks and goats alike must be manipulated into gathering keys for the player, in a lethal twist on the old BASIC game of Snakes.

The best part of Escape Goat 2 is that no matter how complex some of the stages seem, solutions are always logical, and victory can be discerned (and achieved!) with enough experimentation. Every resolution makes sense within the rules established by the game itself, and I never had a moment where I accidentally solved a room, or solved one with no idea of what I had done.

Replay value is high. While a total of sixteen sheep are in need of rescue, only seven need to be saved in order for the credits to roll. While a first-time player might spend hours and countless deaths climbing the tower in search of these first seven, Escape Goat 2 is ripe for pro-level speed-running thanks to stages that offer multiple solutions.

There are even hidden rooms for the sufficiently-dedicated and creative mind to find, tucked away inside previously-solved rooms. These secret areas present some of the most challenging segments in the entire game, and made me appreciate how swift the act of restarting is—I died over and over attempting them, often within moments of beginning. This speedy restart was a welcome mercy.

Escape Goat 2 is a solidly-designed, sharp-looking title with no shortage of replayability thanks to its nefarious tower of challenging puzzles. PC, Mac, and Linux gamers that enjoy platform-puzzlers should find it more than worthwhile, and with a PS4 version recently announced, console gamers will soon be able to get their goat on as well. Rating: 8 out of 10


Disclosures: This game was obtained via Steam and reviewed on the PC. Approximately 10 hours of play were devoted to the game, and the game was completed twice. There are no multiplayer modes.

Parents: This game has not been rated by ESRB, but does contain some mild violence, primarily when the goat dies in a swift explosion of smoke. Since the death animation is the same for all deaths (regardless of source), I would consider this safe for all ages of play, and no more violent than Mario stomping a goomba.

Deaf & Hard of Hearing: The game is completely accessible. All dialogue is told through text, and there are no sound-based puzzles.