Choosing the Archer so I can Kick People in the Face 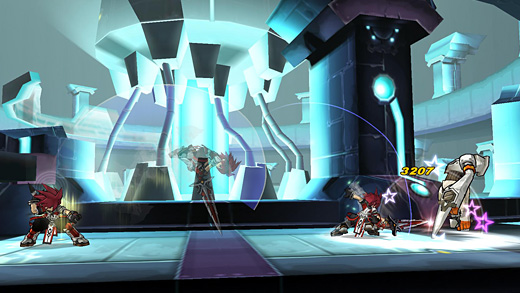 HIGH Pulling off a big, flashy combo against a boss and watching its health bar plummet

LOW Real money micro-transactions for game-changing,non-cosmetic gear, including… (see below)

WTF I have to spend cash to reset my skill points?!

A side-scrolling beat-'em-up Korean MMO, players take on the role of one of five characters and take on quests in a bright, colorfully detailed world, defeating bad guys or fighting other players with a combat system that reminds me heavily of the Namco Tales series. When starting, players choose one of five characters which each represent their own separate classes. Rena shoots stuff with her bow, Elsword slashes stuff up, and so on. After undertaking class-based quests, players can unlock more powerful skills and a new class that focuses and refine their previous abilities to allow focus on the fighting style that they prefer. For instance, I chose Rena, an elven archer with some melee kick attacks, as my eventual main. At level 15, I unlocked the class quests to allow her to become more focused on martial arts (Combat Ranger) or her bow skills (Sniping Ranger). A second class quest at level 35 unlocks even more powerful abilities.

There's a fair amount of customization that can be done via skill trees, but since the characters themselves are identical in appearance, it never stopped being funny (and slightly unsettling) to see carbon copies of my own characters running around, with only gear and costume items to differentiate them on sight. Even with costume gear, I do wish there were more options for personalizing my character, like changing hair or eye color.

Otherwise, gameplay is fairly standard—players talk to a questgiver, get a quest for a particular dungeon, go to that dungeon either alone or with a party, and fight to the end. Each dungeon has three difficulties (Normal, Hard, and Very Hard), and quite often completing one part of a quest in one difficulty unlocks the next part in the exact same dungeon on a higher difficulty. This constant re-running of already-beaten areas forms the bulk of the game, and makes it feel extremely grind-heavy.  On the plus side, special events like secret dungeons and higher-level invasions, and an easily accessed boss rush mode contribute to breaking up the monotony of the grind. 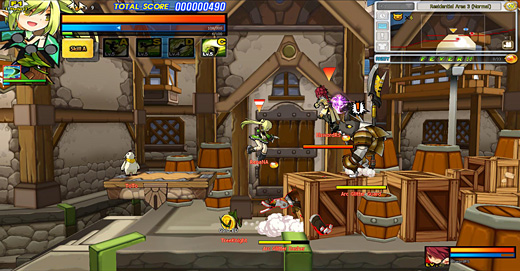 Other aspects of Elsword include guilds, rankings, a Tamagotchi-esque pet that can be raised for buffs in battle, and a crafting system. PvP is present with up to three players per team (1v1, 2v2, and 3v3) but I had a difficult time getting matched with opponents on my skill level. (Basically, my poor low-level archer got demolished multiple times in increasingly humiliating ways by players at much higher levels than I was.) Thankfully there's a sparring mode available for practicing, as well as training matches for players to hone their skills.

Controls are a mixed, but ultimately functional, bag. Normally played via the keyboard/mouse combo, gamepad support has been added but the buttons on the UI don't change to reflect the new keybindings—I would often have to pause in a fight to try and remember what special skill was mapped to what button. Once it did finally sink in, I progressed from fight to fight more smoothly and started to enjoy the game more due to my faster response time with the controller, even though I did still continue to have trouble dashing.

Honestly, Elsword would be a fun little diversion game if it wasn't for some of the cash-based transactions. While I understand that free-to-play models have to make their profit somehow, it still irks me when, having spent ten hours growing familiar enough with a character to make her my main, I decided to reset her skill points and discovered that the items needed for the reset have to be bought with real-life money. I'd either have to shell out my own money (or complete surveys) to reset my character points, or start over entirely. If I had a high-level character and had just found this out, I would probably just quit.

Thankfully, the Elsword community has banded together on the forums to come up with comprehensive skill lists for each of the characters, so a player should really just test out a couple of low-level characters to get a feel for what they'll like, and then follow the guide for that character. There's also a very useful fan-made skill simulator to help plot out future skill point placement.

Elsword isn't the most polished game, but it does beat-em-up action quite well. Between the pets, the gear, the PVP, the costumes, and even the boss-rush modes, there's a good deal of content waiting to be plumbed by gamers that want a bit more action and skill from their MMOs. It's at least worth a look. Rating: 6.0 out of 10.


Disclosures: This game was obtained via publisher and reviewed on the PC. Approximately 18 hours of play were dedicated to the game, with 2 hours of play spent strictly in multiplayer.

Parents: This game has not been rated by the ESRB. Like any other online game with other players, there is always a chance for lewd or indecent text to pop up in chat, and there is no maturity filter to block it. Gameplay-wise, this game features anime-style characters beating up other cartoony enemies, so it's probably no worse than any other side-scrolling brawler. Younger children may require supervision.

Deaf & Hard of Hearing: All spoken dialogue is subtitled, save for when the characters' yell out the name of their special moves. A mini-map provides enemy locations, and the game is completely accessible.

This game is relatively basic, a RPG beat-em-up. The story is very confusing though, characters who have been banished are uses in the game, the quest giver is very boring,etc. The characters to play have a nice little skill specialty tree, and there a total of 8 char. to choose from. Which is about average, for an MMORPG game. However, It’s a very big rip-off when it comes to money. Its a GINORMOUS Pay to win. The game also feels a little bit cheap. Menus are also confusing, and the game is not optimized in the slightest. The difficulty levels… Read more »

Don’t play this game. I got an email recently from them saying that I was permanently banned because I hacked one of the dungeons. I have not played it in at least 6 months and I don’t even know how to hack games. I sent a message to them saying that I haven’t played the game in at least 6 months and that I don’t know how to hack games. I then said I think someone hacked me and asked if something could be done. They replied saying that it was my own fault. How is it my fault that… Read more »