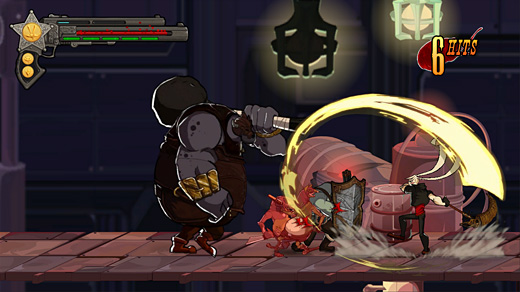 The house was on fire.

Dusty stood outside and stared at it in open shock, the heat of the flames scorching the whiskers on his face before he rushed up the stairs and through the doors.

He looked around desperately, but it was too late.

Her body was lying still in the midst of the flames, pristine white fur still untouched by the raging inferno that blackened the walls and crept, ever closer, across the floorboards towards her.

Dusty leaped through the fire and gathered her into his arms before launching them out of the window, outside, to "safety."

Tears tracked down Dusty's face. Who would do this? he wondered. Who would hurt his… wife? Girlfriend? Whatever.

is a side-scrolling beat-em-up, set in a world where the Wild West C.O.W-boys of Moo Mesa married Devil May Cry. The hero is Dusty, a pistol-totin', fire-fisted, scythe-swingin' son of a rabbit that sets out to blaze a path of revenge after the death of his girl Daisy at the hands of the ruthless Craven.

Joining him in his quest for revenge are Rondel (a hulking bear with a rocket launcher) and McCoy (a silent canine sniper) each there for their own reasons.

Traversing a host of colorful and detailed levels, Dusty and his partners punch, shoot, and slice their way through a host of equally anthromorphic bad guys ranging from cyborg moles with drills for hands to dynamite-tossing armadillos, all the way up to a giant, robotic anaconda snake and beyond. 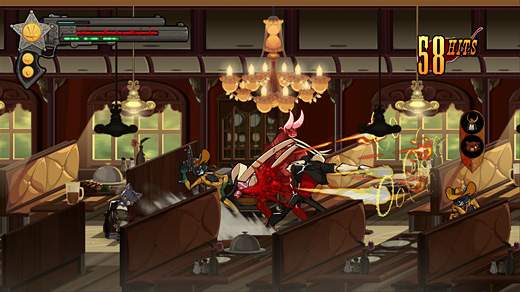 Combat starts out fairly simple. Dusty's got his fists for light attacks and a scythe for heavy ones. In the early stages there's not much to do other than spam attacks and watch the enemies fall, but each enemy drops experience orbs and with enough experience, Dusty can level up, automatically unlocking new moves and more complicated combos.

Once he meets his vigilante partners Rondel and McCoy, Dusty can call them out for an assist to launch rockets or snipe foes whereever the player indicates. There are also some platforming elements, with Dusty leaping across bottomless pits or riding minecarts while avoiding hazards.

On paper, Dusty Revenge seems like a well-put-together game. The environments are detailed, the animation is smooth, the narration is hilariously heavy-handed with Dusty almost sounding more like Max Payne than a desperado. In actuality, a host of small flaws crop up, detracting from the experience and taking me out of the game.

Hitboxes, for example, don't seem to wholly match the sprites. Several times I'd watch Dusty punch the air in front of a foe, and they would get hit. Dusty would also often duck an attack that clearly went over his head, only to take the damage anyway. Even in the platform segments, Dusty's hitbox doesn't seem to go as high as he does when he jumps, resulting in smacks against environmental hazards that I felt like I should have been able to clear.

There's also no form of attack-cancel. If an enemy strikes while Dusty's already attacking, there's no choice but to sit there and take the hit. It's a particularly lethal issue when up against bosses that like to wall-trap Dusty into oblivion. Besides those issues, the guns feel quite underpowered. I quit using them on the second stage once I realized melee was faster and more powerful.

Outside of the combat, other problems cropped up.

After leveling up, I went into the menu to look at the unlocked moves, only to discover that only half of them were present. The menu still scrolled down to the bottom of the list and the demo box showed the combo, but the move list vanished, showing only blank space. Adjusting the volume and then re-opening the settings menu puts the volume to full blast until the menu is closed, and volume settings aren't respected at all during cut-scenes.

And the load times! Even from a solid state drive, they're surprising: up to thirty seconds for the initial load, and around twenty seconds between stages (thankfully, dying and restarting within a level is instantaneous).

feels like a game that needed just a little more time and polish. If the combat could be tightened, interface bugs fixed, and load times could be reduced, this would be a solidly enjoyable title. Perhaps patches will be released to address these flaws, but as it is, Dusty Revenge takes a shot at 2D brawling and misses the mark. Rating: 5.0 out of 10.


Disclosures: This game was obtained via publisher and reviewed on the PC. Approximately six hours of play were devoted to the single-player mode, and the game was not completed. There are no multiplayer modes.

Parents: This game has not been rated by the ESRB, however as a brawler game, this game does contain depictions of violence in a cartoonish setting. I would feel comfortable letting teens play this title and children with supervision.

Deaf & Hard of Hearing: While dialogue in cutscenes can be subtitled, and all bosses and enemies visually telegraph their attacks, there is no indicator for incoming attacks from off-screen, which includes at least one boss fight, however the omission is not game-breaking and only slightly increases the difficulty of the fight. The game is otherwise accessible.