Not Pony Tails or Cotton Tails But… 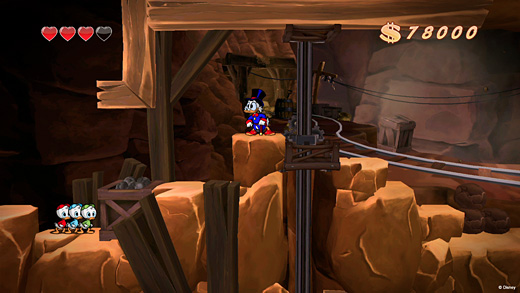 HIGH Diving into the Money Bin!

LOW Managing to glitch the game so that I would have to exit and restart a stage manually, over and over again.

WTF How does Ms. Beakley keep getting into these hidden places before Scrooge and the gang?

In front of me, my TV and the NES that my mother bought for my birthday. Beside me, a copy of Jeff Rovin's How to Win at Nintendo Games. I forget which volume. The cover was yellow. Maybe orange.

On my other side, a shiny new copy of DuckTales.

After ten minutes of silent contemplation and preparation, I set the manual aside, lean forward, and start playing.

Let's jump ahead a bit. Now, I'm thirty-two. In front of me, my television and a small horde of consoles that I've paid for myself. Beside me is my laptop, tuned to Twitch.tv and a random video game stream. I forget which. After getting a drink, I lean forward to grab my controller, and turn on my Xbox 360. It's time to start playing beat DuckTales: Remastered

It might be over twenty years since the original, but my smile is still the same.

Remastered is more than a straight map-for-map remake of the original NES game. In addition to the shiny graphics overhaul, it expands the core content by adding and elaborating on the story of just why Scrooge McDuck is off gathering treasure in the first place.

After fending off an attack on his Money Bin by the Beagle Boys, ol' Unca Scrooge finds a treasure map stashed in one of his paintings, and being the money-grubbing mallard that he is, he promptly sets off to find the five ancient treasures described therein. 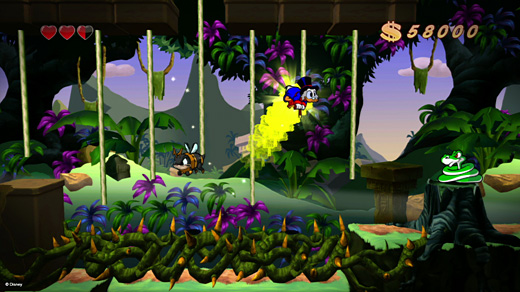 His journey, which can be played in any order from the stage select screen, takes him to exotic locales such as deep within an African diamond mine and even the moon. It's not the most plausible story, but considering that the original made absolutely no attempt to explain how Duckburg's richest resident was breathing on the lunar surface, the expanded plot is cute and serves its purpose well. The game is now fully voice-acted, and coupled with the fluid animation, really helps to evoke nostalgic memories of the 1987 TV show it's based on.

As for the gameplay mechanics, the remake is functionally similar to the original: Scrooge can run, jump, pogo with his cane, and climb chains to navigate the sprawling levels in his hunt for filthy lucre.

Obstacles are frequent, and themed to the location: slippery ledges in the Himalayas make it easy to slide right into a pitfall, while giant boulders have to be evaded when running around ancient Incan ruins.

Enemies are essentially the same as their original incarnations, only now they sport shiny new sprites that make them look like they stepped right off the cartoon. They also still respawn the moment the screen scrolls too far in one direction. The bosses have been overhauled, given new powers and speed upgrades that can cause even an old veteran to fail a time or two while fighting muscle memory to learn new attack patterns.

Speaking of difficulty, Remastered retains much of what made the original a difficult title: an old-school implementation of the life system. Scrooge starts each stage with two lives and three hit points; lose them all and it's back to Duckburg to start the stage over or choose another level. The constant threat of impending death can be mitigated by finding hidden 1-Ups and treasure chests with heart containers, but it never truly fades, particularly in the final level, where instant death is frequent and often. This aggravating setup renders any number of hit points Scrooge may have practically worthless.

Thankfully, there are a few modern anti-frustration features that Remastered

takes advantage of: gone is the time limit of the original title, and a save file ensures that those with time constraints aren't required to play through the entire game in a single sitting.

Also, some backtracking elements that made it impossible to progress unless certain key items were found in other stages have been adjusted. For instance, the keys to the African Mine are now actually in the mine, as opposed to their original location in Translyvania, and can't be missed by the player.

There's also new option to select an Easy Mode to reduce damage from hits but gain access to unlimited lives—it's perfect for learning the stages before retrying the game on a harder, more unforgiving difficulty, while still retaining the threat of the original.

While the cheap instant deaths may drive some gamers to fury (myself included) the game is still a gleefully nostalgic throwback to a time when such gameplay elements were expected of titles from that era. Wayforward Technologies has done an excellent job of taking an old classic and giving it a fresh update for a new generation. Rating: 7.0 out of 10.


Disclosures: This game was obtained via publisher and reviewed on the Xbox 360. Approximately eight hours of play were devoted to the single-player mode, and the game was completed once. There are no multiplayer modes.

Parents: According to the ESRB, this game contains mild cartoon violence. It's a game based off a Disney television show and is perfectly suitable for children.

Deaf & Hard of Hearing: The game is perfectly accessible: all dialogue is subtitled, with the sole exception of comments made by Scrooge during the gameplay itself; however this does not affect gameplay or the story.

I was waiting to see what GameCritics had to say about this game. I wondered if people could separate nostalgia from the actual game. Good for you Kristin.

WayForward kept everything stock and the result is a game that you have to agree is not as good as we remember. That’s not to say the game is bad, but maybe we all remember it more fondly than we should. Hope there isn’t a Goof troop remake, because it would break my heart to learn it was as just above average as DuckTales.