Where High School is Literally Hell 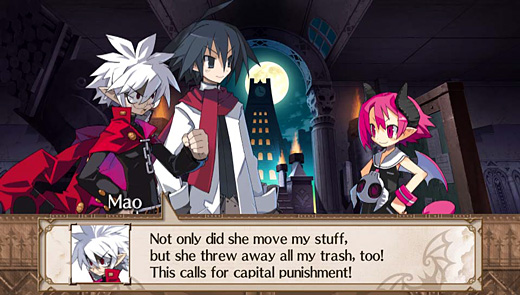 HIGH Performing an attack that deals over 9 million in damage.

LOW Level grinding can get tedious.

WTF The post-game abandons any pretense of sanity and slathers itself in crazy sauce.

I spent my first 20 hours of Disgaea 3: Absence of Detention

being annoyed with it.

Fresh from a 150-hour playthrough of Tactics Ogre: Let Us Cling Together, I found it hard to adapt to Disgaea 3's mechanics, goofy tone, and the utter silliness of the story. I plowed on despite how little I wanted to keep playing, determined to give Disgaea 3 a fair chance to win me over… and at the 21st hour, its concepts finally sank into my brain, grabbed the part of me that ravenously clung to Tactics Ogre, and threw it into a wood chipper.

What was the revelation that hit me? It turns out that Disgaea 3 is just no place for common sense, and that's what makes it great.

As the first Disgaea I've played, the game almost sadistically disabused me of the notion that careful, thoughtful, premeditated gameplay was the way to succeed. If the bizarre opening cutscene didn't make it clear to me, the more time I spent with it, the more I came to realize that this was not the type of logical and safely predictable mathematics that Tactics Ogre had taught me to expect.

No, Disgaea 3 is the type of game where I can avoid a boss' area of effect attack by stacking my entire army one person atop the next person's shoulders, and then, if I want to, hit the boss with the entire tower like some twisted baseball bat of fleshy pain. Or heck, I could just pick the boss up with one of my characters and make him lose a turn.

In no other game would these options even occur to me to try, but in the (Nether)world of Disgaea, it's not just possible, but actively encouraged to break the standard mold of strategy gameplay as much as possible.

This lack of normality extends to the storyline. From the moment the anime-style opening blares out its funky J-pop, Disgaea 3 bombards the player with pure, unrelenting, 100% Japanese Weirdness. In fact, the game is presented like an actual anime, with all the episode-naming conventions, flashy eyecatches where the commercials kick in, and next-episode previews with voice overs. 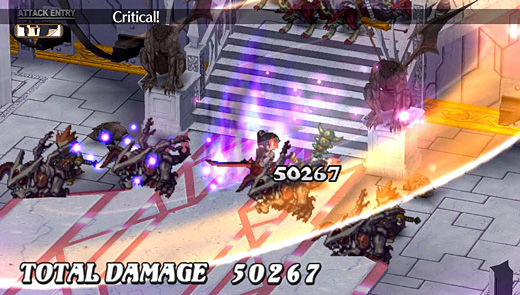 Reinforcing the insanity, the characters know they're in a video game. Witness Raspberyl, who introduces herself by giving a brief history of her backstory, to which another character congratulates her for so succinctly catching up new players to Disgaea 3. There's even a character that decides to start an internet petition to change the game's ending. Never have I uttered "what the heck" so often while playing something, but at least it means the game is open to newcomers.

What isn't easy to grasp for a newbie are the large number of stats to manage. At times I felt like I needed a spreadsheet, or certainly a guide with more in-depth information than the instruction manual provided.

For example, I was used to other games unlocking new items based on my progress, but Disgaea 3 instead employs an army base "homeroom" where topics can be suggested to the student body with a chance to pass or fail. Passing these topics is how new items are unlocked in the shops for purchase. As I didn't realize that, I went through seven (of eight) chapters with cheap equipment that I powered up by many, many runs through my gears' Item Worlds, which is almost a separate game unto itself.

Beyond that, I still feel like an idiot for never figuring out how to actually steal items with my thief character, among other things. Needless to say, by the final chapter I did not have an optimized army or the best gear, but the game is so light-hearted and silly that I still mopped the floor with the final boss and was able to move on to the post-game, where the real challenge began.

Disgaea 3's main story can be completed in about 30 hours with minimum grinding, but there's plenty of meat for power players to sink their teeth into after credits roll thanks to the DLC of its PlayStation 3 predecessor already on disc, new characters to recruit for the bonus epilogue episode, and several difficult bonus dungeons. Combined with options that make power-leveling characters easier, getting that perfect team of fighters is limited only by a player's patience and imagination.

Underneath its wisecracking exterior, Disgaea 3: Absence of Detention

offers enough depth to keep a determined player occupied for over a hundred hours if they so wish it, while also entertaining folks that just want to play a game for its story and multiple endings. Rating: 8.0 out of 10.


Disclosures: This game was obtained via publisher and reviewed on the Vita. Approximately 40 hours of play were devoted to the single-player mode, and the game was completed one time. No time was spent in multiplayer modes.

Parents: According to the ESRB, this game contains mild fantasy violence, alcohol references, mild language and mild suggestive themes. The game takes place in a high school for demons, with all the standard things that teenagers at that age are involved in that implies. Well, that, and a class where a succubus teaches her students to shake their butts to get a crush. Teens are fine, but younger children may have problems with the complexity of the gameplay.

Deaf & Hard of Hearing gamers: All in-game dialogue is subtitled. There are no barriers to enjoying this game.

Hey Kristen great review! I will be honest this type of game is not my usual cup of tea but your review has peaked my interest. Might have to go pick this up. Great job you let THE NERDINESS OUT!!!LOL J/K