A Digital Exercise in Theoretical Fightonomics 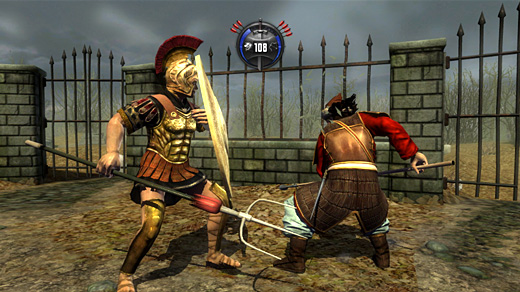 HIGH Chucking a spear through an opponent's head for an instant kill.

WTF Spending five minutes thinking the disc was defective until I used Google.

It took me two hours to learn everything I needed to know for Deadliest Warrior: Ancient Combat

I wasn't expecting anything groundbreaking from a tie-in title to a television show that determines all of its "deadliest warriors" by use of a spreadsheet and an algorithm, and dramatizes the results with staged fights that throw out all semblance of logic. Case in point: Ninja vs. Spartan, where the ninja, in stereotypical black garb, attacks an armed and armored Spartan in the middle of a woody clearing in broad daylight.

I didn't think I would load the game up and have something that trumped Soul Calibur V or even the original Street Fighter II on the Super NES. I actually expected a broken, glitch-ridden mess that would have me laughing at how unflinchingly bad it was, but to my surprise I didn't get that, either.

What I wound up experiencing were two functionally complete games: Deadliest Warrior: The Game and Deadliest Warrior: Legends with all associated DLC are both on the disc. In truth, these projects could offer interesting combat if both weren't so bogged down by load times and a dearth of content.

Let's go over the positives: there exists the makings of a good combat system in Deadliest Warrior: Ancient Combat, which draws clear inspiration from Square's cult-favorite Bushido Blade franchise. Fighters take physical damage that can render arms or legs crippled, and can also be instantly killed from a sufficient blow to the head.

Each warrior falls into one of three classes-champion (slow but high defense), guerilla (fast but low defense) and berserker (midway between the other two)- which, combined with the different short-, mid-, and long-range weapon each fighter can equip, allows for fights that involve more than simple button mashing. Open arenas, a stamina bar that wears out by successive blocking, and the ability to run freely round out the basics of combat. 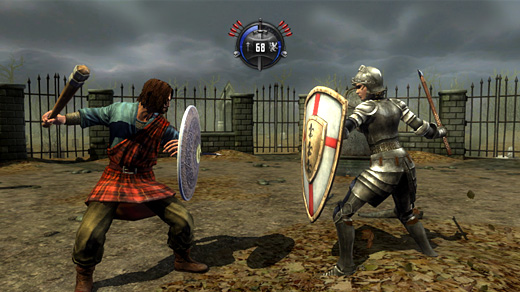 Unfortunately, every time I started to develop an interest in the combat, Deadliest Warrior: Ancient Combat took a shot at my patience with nearly thirty-second long loading times.

To me, there is nothing more momentum-killing than staring at a static screen and realizing that I have enough time to pick up a book or check my Twitter feed. Then, once a bout did start, I'd often win in less time than it took the match to load, dumping me right back to the loading screen for another nigh-interminable wait. By my first hour in Deadliest Warrior: Ancient Combat, I felt as though I was in some sort of twilight purgatory-an unending realm of darkness and banal screen tips where damned gladiators are forced to wait by a hideous and uncaring god until a bright glimmer of gameplay appears to tease them.

Deadliest Warrior: Legends does offer one additional mode over its brother: Generals, a Risk-type game for up to two humans (or one versus the computer) where territories are captured and reinforced until a clear winner is declared. I played one match, proceeded to lose badly until I was pushed back to my final castle, and had the sudden, horrific realization that when the AI went to take my castle, the game would shift from the smooth flow of the territory map to a standard 1v1 match with all the horrible, horrible match loading times that would entail.

The pain of the loading screen was almost physical by then, a near-Pavlovian response that triggered groans and gnashing of teeth from me, and rather than suffer a single moment more of the hideous "Now Loading," I let the computer kill me and escaped into oblivion.

Perhaps sensing that Deadliest Warrior: Ancient Combat was not the strongest tie-in on the market, or perhaps as an incentive for those that had already purchased the downloadable games, the retail disc is sweetened by a separate DVD that contains six episodes of the Deadliest Warrior television show. The back of the box claims that some of these episodes have never been released, which seems to suggest that those particular episodes are missing from the DVD box sets…

If it wasn't for the load times, I would be far more likely to recommend Deadliest Warrior: Ancient Combat

to anyone that liked the television show and wanted a cheap game that called back to Bushido Blade. The gameplay has merit and there's a good selection of weapons to unlock, but I wouldn't want anyone to suffer through thirty second loadtimes for those occasional flashes of depth. Also, considering the lack of opponents for online play or a story mode, there's even less here for the solo player than, say, Soulcalibur V. Given all of that, I can't see any reason to not take my money and just buy a copy of Bushido Blade instead. Rating: 3.0 out of 10.


Disclosures: This game was obtained via publisher and reviewed on the Xbox 360. Approximately 2 hours of play were devoted to the single-player mode, and the arcade mode was completed six times. No time was spent in multiplayer because I couldn't find anyone playing.

Parents: According to the ESRB, this game contains intense violence, blood and gore, and strong language. Fighters are constantly being decapitated, dismembered, and killed off in violent, bloody, slow motion beatdowns. I never encountered any strong language, but per the website the f-bomb is used on occasion, putting this game strictly in the for mature adults category.

Deaf & Hard of Hearing: While dialogue consists solely of taunts, and some characters have intro/victory phrases, there is no option for subtitles. The game is completely playable with no barriers.