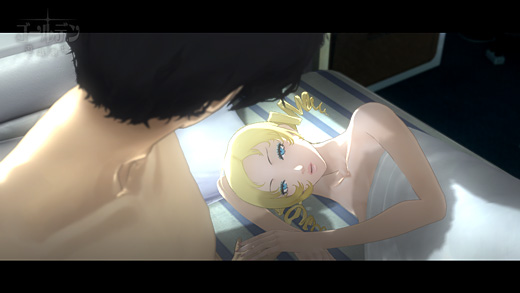 HIGH: How Vincent finds out the antagonist's identity.

WTF: What the heck is the Stage 3 boss supposed to represent? No, wait, don't tell me.

Lucid dreaming is a bizarre phenomenon that I've experienced a few times. For example, I once dreamt that the Power Rangers were attempting to murder me—a situation so ludicrous (even while asleep) that I realized I was dreaming, told myself that I could control these unconscious events, and then proceeded to fight off every single one of the Rangers with my suddenly-awesome karate skills.

, doesn't have to worry about the Power Rangers busting down his apartment door. He's got more realistic, ulcer-causing problems like the uncertainty of starting a new job, having no cash or savings, a relationship with a long-time (possibly pregnant) girlfriend that wants to talk commitment, and a hot-to-trot free spirit who wants to whisk him away from all of it. The giant fatality-filled towers that he's forced to climb when he dreams? Well, okay, those are unusual, and so is the rest of Catherine—a game about manipulating a man's subconscious and helping him survive his worst fears at night so that he doesn't make an ass of himself during the day.

How does such a concept translate into being a video game? It's a dating sim. It's a block puzzle. It's also gorgeously animated by Studio 4c (the same studio animating the new 2011 ThunderCats), and has stellar voice work from the likes of Troy Baker, Michelle Ruff, and Laura Bailey (as Vincent, Katherine, and Catherine respectively) among others.

To be honest, I was initially skeptical of Catherine. Nearly every pre-release trailer played up the story of Vincent and his infidelity without showing any gameplay, and most of the art looked more blatantly sexual than the promos for Fear Effect 2: Retro Helix (go Google it.) I took it as a sign that perhaps Atlus worried the gameplay wouldn't be strong enough to sell it, and when a gameplay trailer finally came out shortly before release (coupled with a demo that had many players doing double-takes) I became even more apprehensive. 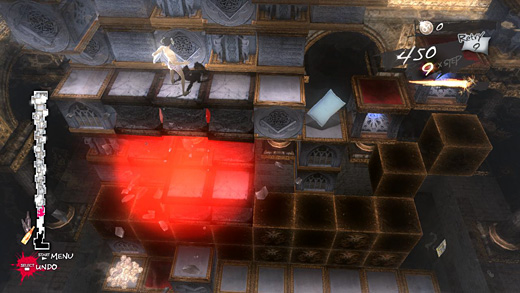 I shouldn't have worried. In addition to having a unique, mature and engaging story, the tower-climbing portions of Catherine are about skill and observation. Each "nightmare" sets Vincent at the bottom of a huge stack of blocks, and if he fails to climb to the top, he dies in real life. Climbing is simple enough, but the game soon throws ice blocks, bomb blocks, trap blocks and other things to contend with at the player.

Many say that Catherine is tough as nails, but during my time navigating these perilous stacks, I came to realize that the time constraint urging Vincent upwards is fairly nonexistent if a player is paying attention. There's an ebb and flow to the tower climbs; faster sections require less complex block manipulation and have checkpoints further apart, while a difficult area will almost always have a checkpoint before and after. A particularly fiendish area may even have a checkpoint and an extra-life granting Mystic Pillow right near each other, granting nigh-unlimited attempts so long as the player always grabs it. In my view, the developers were careful to avoid cheap shots at the player's expense, and for the most part they succeed—if a player is stuck, it's more often than not because of a mistake they made, as opposed to some unexpected trick that the game pulled.

However, most of my own frustration during play was caused by Vincent's loose controls (such as his preference to grab a block in the background when I want him to grab a block beside him) and the final story boss's habit of changing the type of "special" blocks on the tower with lethal results. To be fair, said boss gave me blocks that let me skip vast sections of the tower just as often as it gave the deadly ones, so it ended up being neither here nor there.

In between bouts of block-pushing, tower-climbing shenanigans, Vincent's personal problems (and the player's role as his subtly-influencing subconscious) play out in various ways. 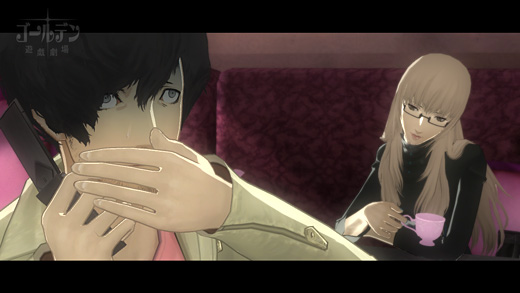 Vincent can, in and out of his dreams, talk to other people around him, each of whom has their own personalities and woes. If the player talks to them enough, he or she can even influence the people to do the right (or wrong) thing to resolve their situation. Like Vincent himself, this is less about telling the player an obvious solution, and more about subtly influencing their behaviors and watching them act of their own volition.

Talk to a fellow sheep about being more confident while on the Landing between towers, and in the real world his waking self starts to gradually become more self-assured about what he wants. Don't talk to them, or decide to be a jerk, and one night that particular person will no longer show up. It's chilling to check the nightly news and hear the anchor dispassionately list a harshly-treated NPC as one of the latest victims of the deadly nightmare.

Getting back to Vincent's moral dilemma, the game's big question is whether he'll be faithful or cheat. I dedicated my first playthrough to being as much of a flagrant Vincent/Katherine-shipping fangirl as I possibly could without turning into the equivalent of a forum troll (Katherine is the girlfriend, Catherine is the "other woman") and also attempted to answer all of the game's personality questions in a way that shoved the good/evil needle as far into the "good boy" side as I could get it.

It was a plan that almost ruined itself because, at the risk of spoilers, Katherine isn't exactly the shallow love interest most dating-sim games would portray her to be; it's not every game that takes a fangirl like me by the scruff of her neck, and makes her think that maybe Vincent was tempted by Catherine for reasons greater than being a skirt-chasing dog…

has a bit of an Inception quality to it. It's a game presented as an Outer Limits or Tales of the Crypt-esque story of horror and maturity, with a protagonist that's a badass determinator in his dreams and a confused software engineer in his waking life. He's a realistic man being chased by literal metaphors of the things he fears the most: babies, marriage, and whatever the Stage 3 boss was supposed to be. Whether pursuing Katherine or Catherine, this unique, challenging, engaging and fun game is one that's worth settling down with. Rating: 9.5 out of 10.


Disclosures: This game was obtained via retail store and reviewed on the PS3. Approximately 20 hours of play were dedicated to the single-player mode, and the game was completed one time. No time was spent in multiplayer modes.

Parents: According to the ESRB, this game contains violence, blood, sexual themes, partial nudity, strong language, and use of alcohol. This is a game about a thirty-year-old man hanging out in a bar, drinking, smoking, and cheating on his girlfriend with a woman that often pops up naked in his bed—and that's not even getting into the nightmarish imagery of the towers or the various bloody deaths. Just keep the kids away.

Deaf & Hard of Hearing: The game is mostly open and accessible, with almost every line of dialogue is subtitled except occasional portions of Vincent's internal thoughts. Anything that is important to gameplay is indicated visually—blocks flash blue to show when they connect on an edge, bomb blocks and their blast radius flash red, and the boss attacks turn all affected blocks a deep red. The bell that rings near the top of a tower does not have a visual indicator, but a map shows the player's progress on the tower. There shouldn't be problems.

As with a lot of guest reviews on here there isn’t a problem with your writing ability. This is a very well written review, and you clearly have a big understanding about the game and its background, which helps make you sound informative. The downside, though, is that it isn’t objective enough. It’s all too easy for someone reviewing a game to not be aware of flaws, and then not take them into consideration when applying a score. It’s fine that you love the game, but as someone who cares about overall game quality and design, I need more than… Read more »

Very nice review. I’ve been on the fence about this one (the genre-descriptors in reviews – dating sim, puzzle game – have been putting me off) but I’m now almost convinced I’ll buy it. I’m a bit amazed that it’s 20 hours long but it sounds original enough that the developers should be rewarded.

Spot on review. I enjoyed this game like crazy, and it’s surely a contender for Game of the Year.

It’s so strange that everyone is ignoring the fact that this is just a puzzle game with some silly anime storyline about dating tacked onto it.

Don’t get me wrong, its a nice idea. But it doesn’t work for me largely because you have no actual control over anything. If the game world were to change as you solved puzzles then great, but it just goes along right up until the end where maybe you don’t end up with Katherine.