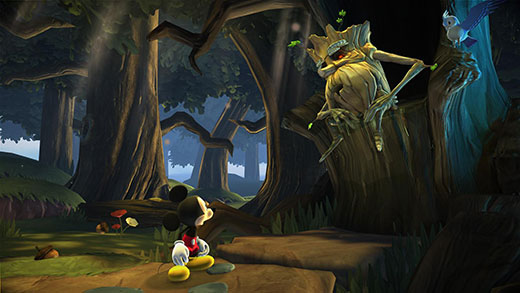 HIGH Someone had fun making this game, and it really shows…

LOW …Except in the unwieldy underwater segments.

WTF Of all the Disney women Mizrabel could go after, she chooses the anthromorphic mouse? I don't even want to know what's about.

That evil, no-good hag of a witch Mizrabel is at it again—no longer content with attempting to murder Snow White for being prettier, she's kidnapped Mickey Mouse's main squeeze Minnie in an attempt to steal her youth. Armed only with his plucky attitude, dogged determination and a mean throwing arm, Mickey immediately sets out to rescue the love of his life from Mizrabel's lair, the titular Castle of Illusion.

takes the 1990 Sega Genesis title and spiffs it up with some voice-acting and sharp graphics, but at its core it remains a side-scrolling, two-dimensional platformer.

It looks like Sega Studios Australia enjoyed twisting the concept of "side-scrolling", though. The linear stages mix up the traditional "go right" design by taking advantage of the new three-dimensional engine. Paths weave into the background or curve along cylindrical towers in twisting, circuitous routes that double back on each other at unexpected moments. Some stages even shift to a top-down perspective, allowing Mickey free, unfettered access to all three dimensions of movement.

Also new in this remake is a hub area where Mickey can roam around, viewing anything he's unlocked and can select levels to journey to, provided he has enough gems to unlock them.

The levels are whimsical affairs – Mickey travels through exotic locales like haunted forests, undersea ruins, and a world of sugar and candy found within a cup of tea. Accompanied by the ever-present narrator, Mickey navigates these fantastical lands in pursuit of Mizrabel's henchmen and the seven rainbow gems they carry. These gems will open a path to the boss witch herself at the top of the Castle.

Of course, with new dimensions comes a change in controls. Mickey's jumping skills are serviceable, but feel weightless. This shift makes leaping difficult to control, and the top-down segments can aggravate the problem with the lack of depth perception—it's sometimes hard to know if Mickey has jumped high enough to clear his jump.

Swimming segments are where the controls suffer the most. Mickey has all the maneuverability of a steamboat, and requires constant buttonmashing to travel with any speed. Mercifully, these swimming sections are both infrequent and brief.

Other than the somewhat floaty controls, there are no real flaws in Castle of Illusion

. It's a short game that's easy to complete in a night or two, and it offers collectibles for those who want some replay. It's charming and well-polished, but players craving challenge might be disappointed. On the other hand, people wanting to relax with something that doesn't require a huge investment of time or effort should consider joining Mickey on his newest mousecapade. Rating: 7 out of 10


Disclosures: This game was obtained via Steam purchase and reviewed on the PC. Approximately 3 hours of play were devoted to the single-player mode, and the game was completed once. There are no multiplayer modes.

Parents: According to the ESRB, this game contains mild fantasy violence. It's suitable for children.

Deaf & Hard of Hearing Gamers: The game is perfectly accessible: subtitles are available for narration and cutscenes, however Mickey's occasional commentary is not subtitled.