Family (n) – The Spouse and Children of One Person 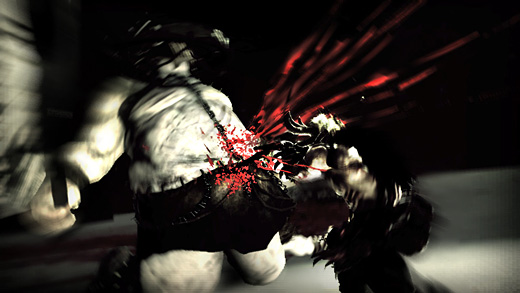 HIGH Crom's hilariously hammy Big No in the opening minutes of the game.

LOW The entire rest of the game.

WTF One boss is a physical manifestation of a female STD.

is the first game where I have utterly failed to come up with something positive to say about it. There's just so much about it that's not good, from the bugs to the level designs, to the repetitive, inconsistent combat, to the control scheme and the dialogue… I honestly feel like I just played the final project for some game design class. It may be functionally complete, but there's no way Bloodforge is ready for mainstream sales without more work. It's not just rough, it's outright amateur.

Bloodforge stars Crom, a muscular, skull-wearing berserker in the vein of Conan whose answer to everything is to stab it until it stops moving and to spout pithy dialogue in the most overwrought, hammy tone possible.

After waking up from a nap in the woods where he dreams about killing Arawn, king of the underworld, he heads home to find his hut under attack by mysterious soldiers. Crom defeats the soldiers, enters to search for his wife, stabs a soldier that turns out to be his wife, and promptly cradles her corpse while yelling "NO" at the sky.

A helpful talking crow turns into a woman named Morrigan and tells him that (surprise!) the soldiers were sent by Arawn to kill Crom before Crom kills him. Morrigan leads our hero to a blood-absorbing gauntlet that just happens to have been buried in the graves of Crom's ancestors, and so begins this clichéd journey to take out the Welsh gods that Kratos didn't feel like dealing with.

Aiding Crom on his quest for vengeance is a third-person hack-and-slash combat system that tries to stave off repetition by giving the player several weapon options (sword, hammer, claws) and a variety of moves.  Ultimately, I just used the hammer to stun-lock groups of enemies, which is surprisingly easy as the AI just crowds like gnats awaiting swatting. Doing enough damage to an enemy enables a finishing blow to be struck, after which plays a short clip of Crom performing a ridiculously over-the-top finishing move that often sends limbs and heads flying.

Attacks can be dodged with an inconsistent rolling maneuver that sometimes makes Crom invincible and sometimes makes him take damage.  This inconsistency carries over into other aspects of the combat. Once, a giant enemy hammered Crom straight under the environment to his death. Other instances of wonkiness included a combat section that refused to end due to an invisible enemy that glitched out, and a camera that refused to cooperate, constantly twitching and swinging about in a spastic attempt to show the ground, the sky, the opposite wall of a narrow canyon, or basically anything except the enemy I'm trying to slice in half. In fact, one deathblow I inflicted nauseated me not due to the level of violence displayed, but because the camera decided to spin in a circle as rapidly as it could before lodging itself into the ground.

The bosses which should be the climax of each stage manage to be broken AND repetitive by asking the player to “dodge-spam” while the camera freaks out the entire time. Their designs are highly questionable, to boot. For example, the first boss looms high over Crom and attempts to attack by sweeping his arms across the stage or firing a laser from the hole in his… giant… bald… smooth, penis-like head. A later boss is literally a gigantic vagina, covered in boils and warts as though it was the goddess of herpes instead of fertility.

I slogged onward in the hopes for some spark, but at no point does the game get better, more polished, or less uninteresting. Bloodforge

is just one meaningless fight after another, listening to the lines of banal dialogue and post-mortem one-liners. Perhaps if it had been more polished and felt less like a late-stage beta, I would be better able to find something worthwhile about it. However, in the state that it's presented, Bloodforge feels like a poor man's God of War that misses every mark established by that triple A title. I don't recommend this game to anyone. Rating: 2.0 out of 10.


Disclosures: This game was obtained via publisher and reviewed on the Xbox 360. Approximately 5 hours of play were devoted to the single-player mode, and the game was completed once.

Parents: According to the ESRB, this game contains intense violence, suggestive themes, blood and gore, partial nudity, and language. Rampant dismemberment, barely clothed women, a boss fight against female genitalia; there's nothing here for any child.

Deaf & Hard of Hearing gamers: All dialogue can be subtitled (off by default). One frequently encountered enemy has an audio cue that accompanies its attacks, but as all attacks are visibly telegraphed, there are no real barriers here.