Still Less Filler Than the Anime 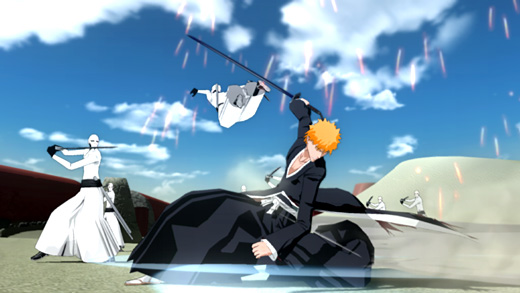 HIGH I can ogle Aizen as much as I want, and nobody can stop me.

LOW Aizen is the cheesiest character in a game full of cheese.

I like Bleach; it's an anime with good music and Captain Aizen is quite the handsome villain, but the series has some serious issues when it comes to the pacing of its plot. With the anime's constant need to throw a filler arc into the middle of storyline since the manga it draws from moves at a glacial pace, if there was ever any other show besides Dragon Ball Z that could benefit from cutting out 75% of its fatty material, it's Bleach.

(spanning from the start of the Hueco Mundo arc up to the downfall of the Arrancar in Fake Karakura town) seems like the perfect chance to serve as both a great game and an excellent recap of the major storyline without any filler arcs getting in the way… Unfortunately, while it seems the developer had a similar idea, they didn't know where to stop hacking away at the dense storyline. The results of the campaign mode resemble nothing less than a bonsai tree, pruned, re-pruned and over-pruned down to a small woody stump of its former self, with a few twigs and scraps of leaves glued back on haphazardly in an attempt to cover up the hackjob.

In total, thirteen storyline missions are presented—one for each of the major captain fights that occur during the arcs, and a few introductory sections. Each mission is started by a narrated text scroll recapping some plot point, that stage's character makes a pithy comment after the surprisingly lengthy load screen, and then things occur that are almost unconnected to one another. The game assumes the player already knows the plot, and as a consequence, story mode is  a highlight reel dedicated to showcasing the most popular fights  and letting them play out in all their glory… Or rather, it would be glorious if the gameplay wasn't so dull. 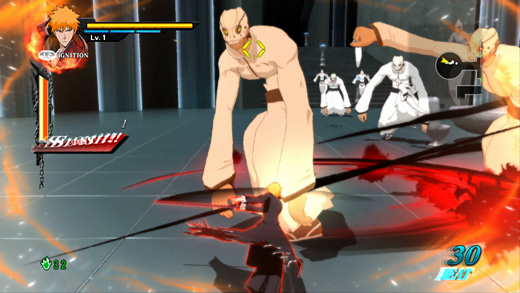 Bleach: Soul Resurrección is a mindless hack-‘n-slasher, with emphasis on the mindless. Combos are "performed" by mashing an attack button repeatedly, there's little variety to the various Hollows (the name of the enemies) encountered, none require any form of tactics to beat, and nearly every fight can be skipped save for a few spontaneous arenas where the player is trapped until specific foes are defeated. Even boss fights rarely require more thought than figuring out which type of attack is supposed to be spammed for an uninteresting victory. The average stage takes only ten minutes, usually less, and if you do happen to die at the boss, players get to start the entire stage from the beginning. There are no checkpoints.

One of Bleach's most consistent aspects is the tendency for new characters to pop up every fifteen minutes.  The same would be true of Bleach: Soul Resurrección, if there were any characters onscreen other than the player's. Instead, the constant companion is the chatter between characters who are never physically present, such as Ulquirroa's chat with Orihime about what a heart is, and Uryu's meeting with Renji inside one of Hueco Mundo's towers. These dialogues are presented as voice-overs with a static picture of the talking character. It makes sense when your character is nowhere near the discussion in progress, but it's disappointing when the conversation occurs between people that should be on the same screen.  This is the PlayStation 3; I don't think having a second AI character pop up and fight alongside the player would strain the engine that much.

Another disappointment was that Bleach: Soul Resurrección does offer a customization system similar to Final Fantasy X's sphere grid that allows characters to upgrade their stats (attack, defense, etc.) with currency gained by defeating hollows. It seemed like a good system until I realized fights could be skipped with a minimum of fuss, after which I never bothered. Reinforcing this decision, the game never punished me for using level one characters throughout the entire campaign.

On the other hand, buffed stats do come in handy for the Mission Mode where another twenty-odd levels are presented in the same way as the campaign, only with restrictions in place like a time limit or the inability to jump. These side missions are amusing in that the end bosses and difficulty vary, and there is unique dialogue for whichever character you're playing as.  It's something.

As far as anime-based games go, there's enough here to entertain a younger fan or anyone that just wants to run around with their favorite characters and beat things up. For players looking for meatier gameplay and greater story-based substance, Bleach: Soul Resurrección

Disclosures: This game was obtained via publisher and reviewed on the PS3. Approximately 6 hours of play were devoted to the single-player mode, and the game was completed one time. There are no multiplayer modes.

Parents: According to the ESRB, this game contains violence, mild suggestive themes, and mild language. As it's geared towards fans of the anime, there's nothing in the game that's worse than your typical episode of Bleach.

Deaf & Hard of Hearing: Dialogue between characters and the few rare cut-scenes is subtitled, and every story mission opens with a text scroll. Enemies have telegraphed attacks. A mini-map shows the location of all nearby enemies, and mandatory enemies are marked with off-screen arrow indicators to show their location. Character attack yells and battle quotes are the only thing not subtitled, but the game remains very accessible.

I asked my roommate (who’s big into anime) why this anime is called “Bleach.” Apparently, there’s no reason. They just figured there was no better name for a show about demons.

Why could they not expand on the concept of the Japanese Heat of the Soul games and do a game like those? Those games for the PSP are enjoyable. This just seems like Hack and Slash 101.