In Hindsight, I Should Have Named the Dog Toto

HIGH Those first three hours of gameplay were the most terrified I have been of a game in my life.

WTF Why is Daniel mute? He's monologuing in flashbacks the entire time!

Darkness is a powerful thing. For a child in the night, that heap of dirty clothes in the corner suddenly becomes dark camouflage for a crouched monster, lurking with dripping fangs. The bathroom mirror is a shadowy portal to another world, where men in dingy raincoats and rusty hooks for hands lie in wait behind the shower curtain. Then, there's the act of flushing, and those few brief seconds where the water drains and the tentacles rise up from the pipes (for there are always tentacles in the pipes…)

Then, one day, the child's mother buys and installs several nightlights. Suddenly, what was once a snarling mound of fangs is just a slightly stinky pile of clothes. The toilet bowl is home to nothing more than water; the bathtub murderer in the mirror relegated to a figment of the imagination. What once caused the child fear and dread are soon forgotten, and as the child grows older, she marvels at what she used to cause her such fear.

My journey with Amnesia: The Dark Descent

It took me eight hours to complete the game. Three of those hours were spent in abject, pants-wetting terror wherein I gibbered madly to myself while locking the protagonist, Daniel, inside a dark room while he gibbered madly to himself in equal pants-wetting terror. The remaining five hours were spent utilizing every ounce of willpower I possessed to not quit the game from sheer boredom.

How did such a drastic change in my behavior occur? How did I go from being so afraid of this game to wishing that I could shut the game off and play something at least slightly entertaining?

It all happened because Amnesia turned on a light…

I knew the exact moment Amnesia had irrevocably wrecked its illusion, and by extension, my immersion and the awareness that I was supposed to be afraid.

Fairly early into the game, I entered a flooded, brightly-lit hallway that was filled with boxes and crates scattered haphazardly along the walls. As I sloshed through the water, something suddenly charged me. I uttered the last shriek I ever would while playing, and scrambled onto the top of the nearest crate. That's when I realized the monster was invisible, that the water was two feet high, and that the monster was completely incapable of climbing up a three-foot-high box to actually kill me. 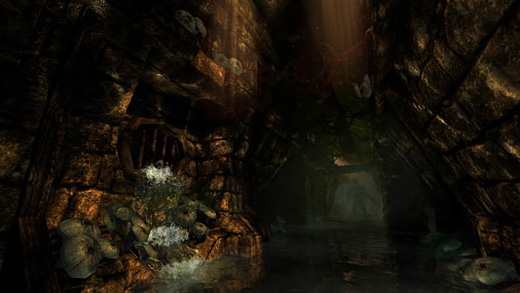 I hopped down. The invisible monster gnawed at me. I climbed back up. The monster, I presumed, glowered at me with its invisible eyes. I was suddenly struck with the impression that I wasn't facing a terrible demon from the depths of Hell, but gazing down at an incredibly angry, yet adorable, water-breathing chihuahua. I promptly named it Wilson, as much like Tom Hanks in Castaway, I was stranded with the adorable little ankle-gnawing aqua-mutt.

It is impossible for me to be afraid of an invisible aqua-chihuahua named Wilson, silently nibbling away at my ankles, just as it became impossible for me to become afraid of any other monsters that eventually put in their appearances. After I lost my fear of the things in Amnesia: The Dark Descent, I started noticing all sorts of details about the game; details that a person who hasn't accidentally shattered her immersion with a dog joke wouldn't pick up because she'd be too busy playing the game as intended.

What sort of details? Things like how many cues the game throws at the player that give away whether or not a monster is about to be encountered. Is an area well-lit before the player arrives, and does the player need to drag something around or solve a puzzle more complex than throwing a lever? No monsters will appear there.

Is the area pitch black but filled with generous tinderboxes? Almost invariably a monster there somewhere.

Is the area completely lit, with not a single shadow to hide? A monster will show up the instant the nearby puzzle is solved, so the player had better be prepared to dash into another room or hide in a conveniently-placed and empty armoire.

At the halfway point of Amnesia, I found myself checking Twitter while waiting for monsters to leave because of other things I noticed during my playthrough. Basically, monsters have all the detection skills of a Metal Gear Solid guard (that is to say, none unless Daniel's standing in light) and that there's no true penalty for being in darkness.

It's true that the longer Daniel stands in darkness, the more his sanity drops. This causes him to mutter and possibly fall over while he huddles in terror, and the screen gets wavy and crawly. However, his insanity plateaus and never gets worse; he never dies solely from going insane and the visual effect didn't stop me from progressing. I eventually flat-out ignored insanity entirely, quite content to dungeon crawl in darkness, and ended up gathering an impressive number of unused tinderboxes and oil jars as a result.

Because I refused to use light, monster encounters became trivial since they're practically night-blind. Many was the time when a monster shambled straight past poor Daniel without so much as a half-hearted swipe in his direction. Worse, I would watch as Daniel turned a pitch-black corner or opened a door to come face-to-face with a monster, he'd collapse in a fit of terror… and the monster just stood there doing nothing because I hadn't bothered to light any torches or use my lamp. 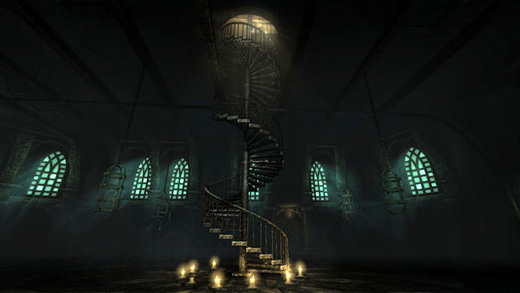 This isn't to say that I went the entire game avoiding all conflict. There are several points where Amnesia forces a monster encounter in bright lighting, and the expected reaction to these encounters is to outrun the monster to the area transition point.

When I came across these monsters and tried to stealth past them, I failed and they immediately killed me. Each time, the death hint came up and told me to run. Afterwards, when the game reloaded from the autosave, I found that Amnesia had just removed the monsters entirely from my path, completely negating both the tip to run, and the reason to run in the first place.

These were not the first times monsters would just appear and disappear upon reload, but they were the most baffling instances as I was clearly supposed to try and do the escape run again. Instead, Amnesia just said, “No, if you're not going to play this properly, then I'm not going to bother.”

It was after the second noticeable occurrence of this kind, seven and a half hours into the game, that the thought finally occurred to me that I might be playing Amnesia “wrong.” My immediate counter-thought was “What is wrong?”

If I were playing Thief, Splinter Cell, Metal Gear Solid, or The Elder Scrolls IV: Oblivion, I would be playing the exact same way as I was going through Amnesia—I'd be putting out light sources to darken the rooms (or refusing to light them) and using stealth to get past enemies. I even joked early on that Amnesia was a lot like playing a forced pacifist run of Metal Gear Solid 2: Sons of Liberty on European Extreme (which means the game's over the instant Snake or Raiden is detected by an enemy).

I realized that I was becoming bored with the game because beneath the horror aspect lurked not more terror, but instead a simplistic and linear stealth-action game with a decent, if somewhat ambiguous story, light puzzle elements and fetch quests. On the other hand, if I had never broken the immersion in the first place, I would have never gotten past those initial three hours because almost nothing could convince me that scaring the crap out of myself for a prolonged length of time was a worthwhile gaming experience.

Was it worth it to demolish my ability to enjoy Amnesia as it was designed for the sake of finally playing it through to the end? I think so. Once the flaws are ignored, Amnesia does a fantastic job of evoking mood through the use of light and sound, the strategic and rare (if somewhat predictable) use of monsters, and a unique sense of powerlessness that I'm not sure if I've ever encountered in a game before.

Even though Amnesia: The Dark Descent

failed to keep me afraid for the entire duration of my time with it, I still appreciated the illusion that Frictional Games worked hard to create, and I think anyone that likes horror games or just likes to be scared will love Amnesia. Fair warning, though: once the curtain of fear is pulled away to reveal the old con artist working the gears behind, it can't be ignored afterward. Rating: 7.0 out of 10.


Disclosures: This game was obtained via Steam download and reviewed on the PC. Approximately 8 hours of play were devoted to the single-player mode. There are no multi-player modes.

Deaf & Hard of Hearing: All dialogue is subtitled. However, monster appearances are announced via a change of the background music which does not have an on-screen indicator. Players who have difficulty with sounds, therefore, will find monsters just that more startling when they appear.

As a profoundly deaf gamer, I actually found Amnesia plodding and mundane. I will admit that some (deaf) gamers could find the sudden appearance of monsters frightening – I’ve seen clips on youtube of hearing people getting scared, for sure – but, in my experience, I had no indication anything was wrong until I saw the monster there, usually in front of me, so I would shut my light off and be on my way.

I just felt disconnected from the game’s apparent intensity.

I’m about halfway through Amnesia right now, and the main mood killer for me (spoilers) is the stupid repetitive monsters with slack jaw (who I will refer to as Fred) that keep popping up every five minutes. In the early part of the game they were downright terrifying, but now they’ve just become a nuisance. Rather than, “Oh dear god! What the hell is that thing?!?!” it’s more like, “Dammit, guess I’d better wait in this corner for five minutes until it goes away.” The problem with these Freds (and I include the blade-hand guys) is that there is no… Read more »

This is a great review. I think that’s currently a hurdle with all horror games though – once the limitations of the ‘game’ become apparent, the fear factor shrinks irreparably. By the time Amnesia got into its final act, I wasn’t even tense.

But I do think Amnesia is slower than most horror games to peel back its veneer, and when this game is scary, it’s *really* f’in scary.